Continuing with my selection of "cool BJJ people I met in Virginia and interviewed", next up is the mighty Val Worthington. As I told her, although she may not personally claim the title of BJJ historian, she is herself an important part of BJJ history, particularly the online community this BlogChat interview series is focused upon. 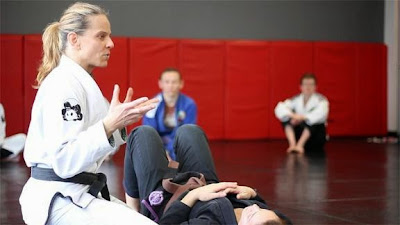 I remember reading Val's excellent blog back when I started. She was also all over the forums, always putting out great advice. Val has since become a hugely influential figure in the development of the sport, perhaps most notably through the Women's Grappling Camps she's been running alongside a number of other female instructors for the last few years (which have recently grown further into a co-ed model, as of last month, run through Groundswell Grappling Concepts).

I managed to grab Val for around thirty minutes just before she was due to head home, providing me with plenty of content. The first part is up on Megan's (who will be appearing in a BlogChat of her own later) site, Groundwork BJJ. Part two will be appearing in issue #21 of Jiu Jitsu Style. Finally, this is part three, covering Val's thoughts on blogging and the online BJJ community.

Can: Having started training in 1998, you were also around at the beginnings of the online BJJ community, especially sites like NHBGear. What importance do you think online forums and the like have had both in your personal jiu jitsu journey and on jiu jitsu in general?

Val Worthington: The impact of the forum and the opportunity to communicate online with people was huge, in my personal development. I mentioned earlier that I had an insular experience, but when I got on the forums, I realised that there were tonnes of people, relatively speaking, doing jiu jitsu, that they were far flung and that there were women doing jiu jitsu. Some of the people that I would consider to be my best friends in jiu jitsu now are people that I got to know on the forum before I ever met them in person.

Being connected to that community was incredibly helpful for me, because it helped me see that even if I was insane, there were other insane people like me. They would accept what I was doing, support it and help me find ways to pursue it.

In terms of the sport itself, my perception is that the phenomenon which happened to me, of being able to connect with people, also happened with many other people. It also seems like it made jiu jitsu more open source. Way back in the day, I've come to learn subsequently, people didn't train at other schools, they didn't share their technique, they would keep it very close to their chest until they were competing.

So, there were lots of particular personalities from academy to academy. The internet has facilitated, with things like MGinAction, the sharing of knowledge. I personally think that is good for the sport, as it pushes the sport forward. If everybody knows how to counter a certain set of sequences, then the person who likes those sequences has to figure out a way to counter the counter.

It also just makes things more interesting. You can see live streaming video, you can look at technique online. When I first met Andrew Smith, he had a library of VHS tapes – I'm not sure he still has or needs them – but there is so much footage online, so many ways you can educate yourself. You also have people thinking about the lifestyle side of things, which is one of the areas I like to contribute to. 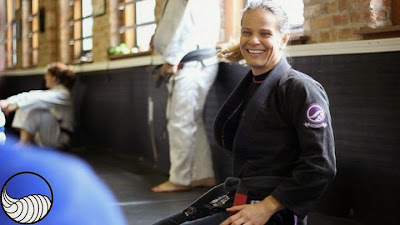 Can: The other part of the online question I'd like to ask you relates to your blog, which you started in around 2006. That proved very popular: could you talk about how that came about?

Val Worthington: 2006 was the culmination of a set of decisions I had set in motion probably a year earlier. I was living and training in Chicago, when I came to the realisation – I was around 35 at the time – that I was unhappy in my job and unhappy in my life. The only thing that made me happy, apart from the people I love, was jiu jitsu. I took what for me was the drastic step of quitting my job and selling the condo that I owned to fund a trip around the country training jiu jitsu.

I knew that it would be a singular experience in my life. I didn't know quite how singular, how much it would push me forward as a person and where it would take me. But I knew that I wanted to capture it in some way. The blog that I wrote was for me, initially. It was a way for me to chronicle what I was going through in a way that I could go back and review. My thought at first was that it would be for my family and friends, who were thinking "Ok, so where is she now?"

What ended up happening was that as I got more and more into the journey, more and more people came along with me. When I went for a couple of days without writing, there would be readers who I guess had started to take an interest in what I was doing – even though I didn't really know what I was doing yet [laughs] – and sent me messages asking "Where are you? What are you doing? Update us!"

I feel like I was tapping into some sort of secret desire that a lot of people have to chuck it all and do something completely different. That's how the title of the blog came about. A friend of mine talked about how I was going to be prancing around the country and that I sucked for having the opportunity to do it. So, my blog became known as 'Prancing and Sucking'.

What I found was, again, this sense of not being alone. I'd been terrified to take that step, trying to do something completely different with my life. I thought I was insane, I thought I had been making mistakes all along in my life: how could I get to the point where I really needed to take such a drastic step? But it turned out to be the best thing that's ever happened to me in many ways. One of the most gratifying things about the blog was that I got so much support and so much non-judgement.

The blog posts that I wrote, the most raw, where I really exposed myself about some horrible day I was having or a deep-seated insecurity, I would close my eyes and click send. I would wait for feedback, or no feedback, but the feedback I got was always "Thank you so much for sharing this. I know it was difficult, but it made a difference in my life: I'm glad that I'm not alone." It was the first time that I realised that I had something to say. Even though it was about this niche hobby, the things that I was experiencing, when I wrote about them authentically, they resonated with people who did all different kinds of things.

That was incredibly important to me. As I got more confidence in my writing and in the idea that I had something to share, writing became one of the main ways I would like to be able to give back to the jiu jitsu that has given me so much.

Can: Your blog was one of the pioneering works in this semi-genre of a 'jiu jitsu travelogue', best exemplified more recently by The BJJ Globetrotter. Are you planning to follow that model and turn your experiences into a book? 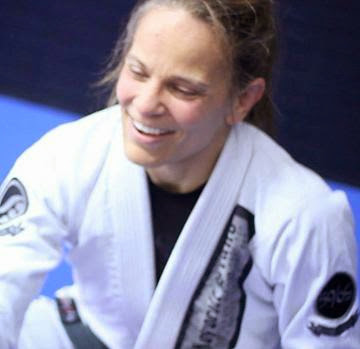 Val Worthington: I am, I'm working on that right now. It's taken me a while to find a book length voice, if that makes sense. I am working with some people now to help me shape that. I'm in the throes of doing that, trying to hone in on which aspects of my experience are really relevant. I've been trying to take a look at the entirety of my experiences and figure out what pieces hang together, what I should share first and what I should share further down the road.

I've written and discarded probably hundreds of pages [laughs], hoping to retain some better pages. It's in the works right now.