Georgette is one of my favourite people. I've flown over to the USA twice so far to visit her and she has always been an incredible host (amazing cook, too: you haven't experienced Thanksgiving until you've had it at Georgette's house! ;D). She is also among the handful of bloggers I've been following consistently for around seven years at this point, blogging at Georgette's Jiu Jitsu World.

During my second visit to Texas last year, I made sure to get some interview time with Georgette. This first part of the interview talks about her background in martial arts and blogging in general, then next week we'll get a lot more serious and discuss the issue of rape culture (Update: Now up, here). That's an important topic, on which Georgette is eminently qualified to speak. But this week, you'll hear about her beginnings in the wonderful sport and art that is BJJ. 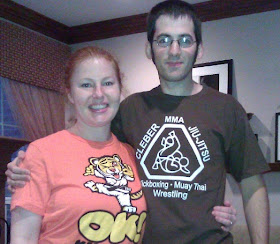 CAN: How did you get into jiu jitsu?

GEORGETTE: I have always enjoyed martial arts, and the only kind of exercise I‘ve ever been able to keep up with is something competitive and social. So, when I knew I was going to get married and I wanted to lose weight, for all the wedding pictures and what not, I decided I would take martial arts class.

I started taking a class in kajukenbo, which appealed to me because it was very social and very competitive. There is a lot of very alive sparring in it, but when we got to the portion of the curriculum that dealt with jiu jitsu, I was hooked. Pretty soon I realised that there were other things in kajukenbo that weren’t jiu jitsu. When we were done doing jiu jitsu for a while, I was forced to move on to punching and kicking things and people: I didn’t like that as much.

I waited until I got my first belt in kajukenbo, then I quit, because every minute spent doing kajukenbo was a minute not spent doing jiu jitsu.

CAN: I think I remember reading about that on your blog: you started it before you began jiu jitsu, didn’t you? So, what was the original purpose for the blog?

GEORGETTE: Just sharing with family, really. It was a way for family to see my garden, my house, stuff like that. Obviously wasn’t very well read, at all! [Laughs]

CAN: So, you started your blog around 2005/2006, then you got into jiu jitsu in 2008, moving on from kajukenbo. How did that impact the direction of your blog, as you began writing a bit more about jiu jitsu? It had a different purpose, I guess.

GEORGETTE: It did. At the beginning of my jiu jitsu blogging, I was writing about techniques that we did in class. It was the same as a lot of blogs, an online technique journal. The first jiu jitsu forum I ever participated in was on NHB Gear. There was a guy on there named ‘Too Old’, who I became friends with. He’s a lawyer and at the time was a blue or purple belt in San Francisco.

He told me my blog was the most boring thing he’d ever read and begged me to write more about the personal side of training, what it meant to me, my emotional reactions. I resisted for a month or two, then I started writing about the issues that came up for me training and started getting more readers. I got yelled at by my instructor for writing all of ‘our’ techniques down on the internet, so I had to take all of that stuff out. I figured, “Screw it, nobody cares about the techniques anyway.”

CAN: Right, a diary. Was it particularly a diary thinking from your personal perspective as Georgette Oden, or a diary as in “Other women could be reading this, how can I be helping them get on”?

GEORGETTE: I never, especially for the first year or so, thought anybody would read it. Even after I started getting comments, I figured maybe one or two people would read it. I didn’t expect anyone at my academy to find out about it or care. So at the beginning, I was very free with my thoughts, my feelings, my expressions. It was just a reflection of me, not thinking what it did for the community or anything like that.

CAN: When did you start getting into reviewing? Was that early on, or did it take a while before you had enough clout?

GEORGETTE: I think for me, the reviewing came after I was getting sponsorship. I started getting sponsorships because I asked people for free stuff [Laughs]. I bought a rashguard, won a tournament, then took a picture of myself with a medal and the rashguard. I’d write to a company and say “Hey, by the way, I did well and I wore your product. You want to send me some more stuff?” And they did, so I did it again, with a coloured gi. People started coming up to me at tournaments asking where I got those coloured gis, I’d tell them and then get more sponsorships.

It then got to a point...I don’t even remember how I got asked to review the first thing. I think I just started reviewing things that I bought, then people started hitting me up to review other stuff.

CAN: Were you still a white belt at this point, or had you gotten to blue?

CAN: That reminds me. One of the main things that impresses me about you is the sheer amount that you train. Did that start pretty early, that it became an obsession?

GEORGETTE: Oh yeah. If I couldn’t train every day, I was very frustrated.

CAN: I think you said this to me earlier, but have you always had some kind of activity that you get into really heavily?

GEORGETTE: Yes. I always have an obsession, that’s my trend.

CAN: How have you managed to get in that much training, in a very physical, difficult sport like jiu jitsu?

GEORGETTE: Hmm. I just don’t care if I’m injured. I sometimes say that if I had a superpower, it would be fast recovery and that’s true. I do recover very quickly. I’m also not keen on babying myself, so I don’t mind being tired and I don’t mind being sore. If I’m having fun doing it, I’m going to do it as much as I can. I have an addictive personality, I guess.

CAN: Do you think your training would have been the same if you hadn’t had a blog and interacted so much? Has it had a big impact in terms of actually improving your jiu jitsu, helping you progress faster?

GEORGETTE: I would say that the way it has helped me has been much more of a ‘big picture’ help. Because I blog and I’m active in the scene on an internet level, I’ve reached a lot more people than I would just as an individual. I’ve met a lot of people, so that when I travel, I feel like I have an academy everywhere I go, they're like family. I think that has helped my jiu jitsu, but I don’t think blogging about the techniques any kind of help to me.

CAN: And I guess that is something you stopped doing fairly early on.

GEORGETTE: Yeah, it is. I know other people write technique blogs, it depends on how you learn. I just don’t have time. I take notes and I have little scraps of paper piled in a box in my office, but that’s as close as I get. I don’t digest it again, though I know that would probably improve my retention.

I think I’m an aural learner, as I need to hear someone describe in words what they’re doing. I very rarely remember the details of what it looked like. I can remember what it felt like, but unless I can put it in words, I can’t reverse engineer it the next time. If I have a question, I have to remember if they said, “The leg closest to the head, grab the top leg,” or whatever. I have to remember the words to be able to recreate the position.

Part Two is coming next week. In the mean time, why not check out the chat I had with another awesome blogger, BJJ Grrl?
slideyfoot at 10:15
Share