You will sometimes hear people say things like "Oh, we don't need feminism any more, everything is ok now." Unfortunately that's very much not the case. You may have heard the terrifying statistic that estimates one in three women globally will be sexually assaulted during their lifetime. Specifically, that comes from the UNIFEM publication Not A Minute More: End Violence Against Women, powerfully summarised on page six:

One in three. That stark figure sums up the crisis confronting women throughout the world. Of three young girls sitting in a classroom, learning to read and write, one will suffer violence directed at her simply because she is female. Of three women sitting in a market, selling their crops, one will be attacked — most likely by her intimate partner — and hurt so severely she may no longer be able to provide for her family. Throughout the world, this violence will be repeated: globally, one in three women will be raped, beaten, coerced into sex or otherwise abused in her lifetime. Violence against women has become as much a pandemic as HIV/AIDS or malaria. But it is still generally downplayed by the public at large and by policy-makers who fail to create and fund programmes to eradicate it.


Speaking a few days ago, the head of UN Women stated that no country has yet achieved gender equality. We're still waiting for governments to keep their promises on that front. Back in 1995, 189 countries pledged to end laws discriminating based on gender. Yet twenty years later, those laws still exist, as Equality Now's 'Beijing 20' campaign highlights. Fortunately, thanks to charities like Equality Now, there is hope for the future. When I started doing GrappleThons back in 2012, I already knew that Equality Now was the charity I wanted to support. I've had a direct debit with them for around a decade at this point, as I believe their work is incredibly important.

I couldn't do the GrappleThon for them in 2012, as they were not yet on an online fundraising platform. However, by 2015, Equality Now had started using MyDonate. Fortuitously, this year it happened that International Women's Day (8th March) fell on a Sunday. Hence why I decided the time was finally right, getting things started in January. Once I've decided on a charity, my next few tasks are picking a date (this year that was easy), finding a venue and getting the ever-popular fundraising t-shirts sorted.

Just like every year, the awesome Seymour 'Meerkatsu' Yang and the wonderful people at Tatami Fightwear immediately pledged their support, providing the t-shirt design and printing. The main venue for Artemis BJJ, MyGym Bristol, also agreed straight-away to let us hold the event on their giant mat space. We're also lucky to have a new company join as a sponsor this year, Gimono from New Zealand. They contacted me to offer a fantastic gi to whoever raises the most money, in the winner's choice of cut, colour and size. Thanks to all of the GrappleThon sponsors for your incredible support! :D

In terms of pre-event press, Martial Arts Illustrated put a story on their site, the wonderful SportsWatch site covered us again, as did Bristol Women's Voice. A personal highlight was getting invited last month by veteran combat sports broadcaster Eddie Goldman to talk about the GrappleThon on his show, 'No Holds Barred'.

On the 7th March, I got up at 9am to head to the Artemis BJJ open mat as usual, for pre-GrappleThon rolling and drilling between 10:00-12:00. Heading home for a shower and packing my bags (gi rainbow!), I arrived at MyGym shortly before 2pm, ready for the action. There was an especially good turn out this year: it seems every time we increase the space, the numbers go up to fill it, which is brilliant! There were over ten different teams from around the country, ranging from London to Aberystwyth, Chesterfield and Stone, among others. Many of them were returning from last year's event, like Horizon BJJ and Origin BJJ (headed up by 2013 GrappleThon 24hr Crew member, Mike Cowling), with plenty of new faces too.

We had our first contingent from Fightworx a bit further South West, including one of the top fundraisers, Jade. Bristol Uni BJJ was represented too, as were several other local teams, which was cool to see. I enjoyed meeting Andy, a fellow student under Kev Capel, who came down from Oxfordshire to take part before heading back up for a seminar with Kev. I also got to catch up about a previous instructor of mine, Jude Samuel (who gave me my blue), as Hiren from Legacy BJJ returned for what I think is his third GrappleThon now.

Chris Paines, probably the most impressive grappler this year in terms of stamina, kept on going at high intensity for pretty much the whole event. He brought down a team from Fighting Fit in Stone, including another stalwart of the event, Anya. There were lots of other women present too, some who had been before, like Paula (who has been a constant presence at the Bristol GrappleThons) and Anne.

Anne leads the mighty Birkett Crew from Westcoast BJJ in Wales, who were always ready to step in and keep the GrappleThon rolling on. Med, Adam, Kris, Katja and Jamie, along with Anne, were a key part of this year's event, as was Westcoast BJJ last year. I saw them in Congleton last year too, naturally featuring the indefatigable Kris. Read their write-up over on the Westcoast BJJ site, here.

Congleton is also where I first met Chris P. He topped this year off with an especially tough roll towards the end with a certain visiting black belt from Miami. That was not just any black belt, but William Abreu, who has a grappling resume including world titles in BJJ and a high-level background in NCAA wrestling. He very kindly took time out of his UK seminar tour to join us on Sunday morning, full of great advice and tips for his lucky training partners.

Lots of Artemis BJJ students came down too, such as Simon, Steve W, Antonis and Chris J. The women were also well represented, with Tracey and Zoe heading down. Most exciting for the other attendees, Tracey brought along her famous cake, keeping our stomachs very happy through the late hours. Stefan was there too, not only grappling but getting in lots of video footage. I've been working my way through it, so plan to have something edited together in the near future.

I also got to meet up with some old training partners, like Berry and Steve H. As with previous years, Steve was on hand to help set up the live stream. After we battled with it for an hour and a half, it eventually whirred into life (should still be viewable, here), but only managed just under three hours before collapsing. As a result, I got a number of comments on Facebook congratulating us on how many people were still going at 3am. I had to sheepishly inform them that the footage they were watching was not from 3am: it was from 3pm the previous day. ;)

Around midday on Sunday, a photographer from the Bristol Post randomly appeared, a little after Laura headed down straight from a hen party to take part. She and Paula were featured in the Post on Monday, with some excellent posing skills (the online version of the story is here). We also got visited by Nicola from SportsWatch: she's a good friend of Artemis BJJ, having tried out a class herself.

Thanks to everyone for coming down and making this event a success, with special thanks to the brilliant efforts of all the fundraisers. At the time of writing, the grand total is at £2,616. I'm hoping we can make it to at least £3,000, so please keep those donations coming in! :) 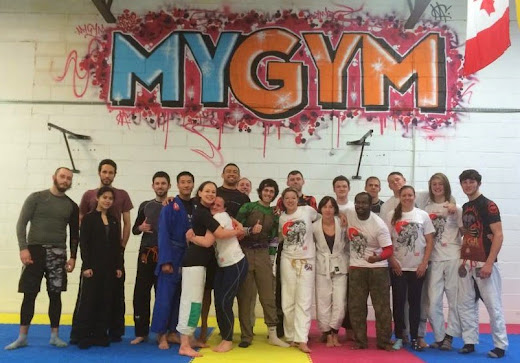 Given that 2015 marks the fifth GrappleThon I've rolled at, my plan of action is fairly well defined at this point. The most important thing is to pace yourself and pick your training partners very carefully. I therefore don't even start sparring until around 11pm, stepping in when I can see people are getting tired and the numbers are low. Interestingly, this time the sparring numbers didn't drop significantly until around 4am. We were then grappling in long shifts (around thirty to forty minutes) until 10am, when people both started to wake up and return to the mats from around Bristol.

Update June 2015: Here's a video I cobbled together on MovieMaker, mainly built from the oodles of footage Stefan captured:

I got in a number of rolls with Simon, along with several of my other students, like Zoe. I also jumped in for a long flow roll with Mike, where we were mostly just exchanging position with some light resistance, neither of us seriously going for submissions. I went for the unstoppable sweep a few times and landed it once or twice, but then this was going light. We also got into some bizarre entanglements, both trying to wrap the gi in random ways and hooking limbs. That's one of the most fun things about flow rolling, you do stuff you never normally do and get creative.

Rolling with Anne was fun too, another long spar. She has good defence, staying tight and not giving me much, except for that one position where she had one leg up and I kept knocking her over. Thinking about it afterwards, I'm wondering if moving into a low crouch would be more stable? But then I've never been great with combat base, so probably the wrong person to judge.

It was great to see the MyGym mats full of people all working together for a good cause. It was especially cool that so many people mentioned that they had learned a lot from rolling with lots of new training partners. We were also very fortunate to have Lisa in attendance, donating her massage skills: there was almost immediately a queue waiting to take advantage. I'm already looking forward to the next GrappleThon: I'm planning to get something sorted probably for April/May 2016. Hope to see you all there again! :D
slideyfoot at 14:00
Share