For most of my time in jiu jitsu, I've been aware of the Hereford BJJ Open (they started in 2009, I think, three years after I began training). Dave Coles has always had a reputation as an excellent tournament organiser, running things professionally and on time. It was certainly a much bigger venue than the last comp we attended, with more 'big' teams in attendance. 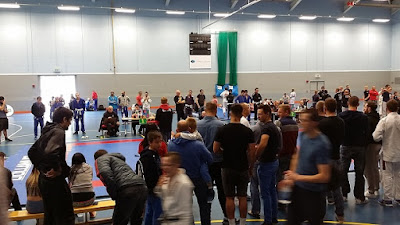 The main warm-up area was clearly marked off-limits to coaches and spectators, with a long bench in front of each competition mat. Unfortunately, what ended up happening was that most of the spectators stood behind that bench to cheer on their team, meaning if you were in the staggered seating, you couldn't see anything. Though that isn't an easy issue to resolve, as understandably people want to cheer on their team mates: perhaps making the benches only for coaches and no standing?

On a personal note, one of the reasons I was pleased I had some students keen to go to Hereford was that I knew a lot of my old training partners and friends would be involved. Pippa was there refereeing, as was my instructor Kev and several friends from Chris Rees Academy like Rob and Omied. I also got to catch up with Chiu, plus say hi briefly to Kevin Webb (the classes I took from him back in 2010 still rank as among the most impressive I've experienced, from a teaching perspective).

The divisions ran mostly on time, Simon's lightweight (76kg) division was underway by around 10am, after a 09:15 weigh-in. Jim had a longer wait in the middle-heavy (88.3kg) division of about an hour and a half IIRC, while Kirsty had a similar wait after weighing in at 13:30 for female middle-heavy. Sadly for Kirsty, her division didn't have enough people in it and was therefore merged with the category above. That didn't happen at Roll Models, because they offered free entry to women (and £5 to their next event on 10th October). If Roll Models can keep that up, it's a huge plus for female competitors: competing against people your own weight is a luxury men can take for granted! ;)

It meant that in both of Kirsty's fights at Hereford, her opponents had a significant weight advantage. The winner of the division was 76kg, landing some powerful hip throws. Apparently she's a pro MMA fighter, though I'm not sure if that was just hearsay. I thought Kirsty did really well considering that, with a tight defence giving very little away. That was reflected in the points: the first fight her opponent won on a pass 3-0, whereas in the second it was a mere single advantage.

All three of the team put on a good performance, I thought. Their closed guards were strong and tough to pass. Jim very nearly landed a loop choke in both his fights, especially at the end of the second. Simon also looked strong, holding out in a triangle for over a minute before the pressure on his neck got too much. I can sympathise, as I've had a nastily tweaked neck from refusing to tap to the pain of a triangle before: it would be much worse if it had been in the death-grip of a competition!

I continued with my low-key approach to coaching, shouting out things like 'Posture!', 'Stay on your toes!' 'Stay calm!', 'Keep breathing!' and the like. A lot of the other coaches were going into great detail, particularly during the women's matches I saw. Competitors were literally pausing to look at the coach, waiting for their next instruction. It certainly works, as those competitors also won. However, in my experience so far, the competitors can't hear me very well anyway, especially with the tunnel vision of adrenaline taking hold.

At open mat, the feedback I've gotten every time is that brief imperative reminders come through better and are the most useful thing to hear, along with the time if it's getting towards the end. I'll keep on asking when we do comp prep (i.e., a mock competition match during open mat) to see if that changes. Might well vary from person to person as well, given there have only been five competitors from Artemis BJJ up until now.

Everybody I watched fight (both my students and others) looked to be having issues with attacking from closed guard. The first problem is breaking posture, then moving into some kind of attack. It's a problem I've had myself, which seems to have been at least partially resolved by the most recent month of closed guard focus back in Bristol. I spent that whole month focusing on the shoulder clamp when in closed guard, finding it helps open up angles and make closed guard more proactive. I therefore want to institute some drills to familiarise students with that, based around posture breaking. Maybe pull the elbows, along with the shoulder clamp reach and posture break, then finally the two-on-one grip break to the back? Lots of options.

I'd like to do some more work on blocking the cross-face too. It's natural to start side control with the person already in cross-face, to practice escaping that position. That's valuable, but I'd like some drills that emphasise you don't have to accept the cross-face in sparring, especially outside of specific sparring. I've been using the current position of the month at Artemis BJJ (side control) to practice what Jeff Rockwell calls his 'Sit-Up Escape System'. I refer to that as stiff arm: either way, it's been helping. Something else to add into drills. :)

Another thing this comp highlighted (as did Roll Models) was other aspects of being a coach. Shouting stuff when people are competing is a part of it, but I think a much bigger part is being there to motivate, encourage and reassure the competitors. I feel it's also important to emphasise that while winning is obviously nice, competition is much more valuable as a learning tool. You're not going to win every time, but you can definitely learn something useful every time. If you can do that, then each competition you attend becomes a way to further your game.

I'm not going to be able to be at every comp - my girlfriend needs some weekends with me too, after all - so hopefully some of the regular competitors will be able to take on that role too. We've only been to two competitions thus far, but a 'competition team' is already beginning to form. I'm sure as the students interested in competition (not everyone is, which is totally fine: competition is just one part of BJJ) gain more experience, that 'assistant coach' role (for want of a better term) will be filled. Particularly as they are all now more experienced on the competition mats than me, with my whole one competition fight. ;)
slideyfoot at 17:00
Share