Immediately after I'd been round 'Goya: The Portraits' at the National Gallery, I jumped on a Megabus back to Bristol. That's because I wanted to make an appearance at a grappleathon, being held at Pedro Bessa's school in Bristol.

Pedro is the longest established BJJ instructor in Bristol, having been here for over a decade now, IIRC. I've trained with various students from there, as well as from associated academies, like SB Fitness up in Bedminster, but until now I hadn't had a chance to visit the main academy itself. When Alex from SB invited me to the Facebook page for this event, that seemed like a great opportunity to finally pop along.

I'd already met the organiser, Tom, as he and another Pedro Bessa student had supported the Chelsea Leah seminar a few weeks ago. He's the gym manager at Pedro's place. The grappleathon he came up with was to raise money for a kids project run by BJJ legend, Terere: you can still donate over on the Indiegogo page, here. That's due to be open for the next 12 days. 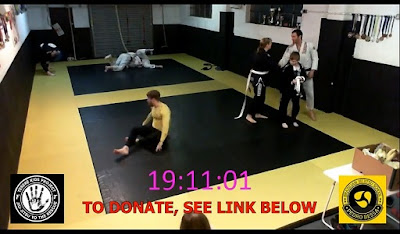 Tom did a brilliant job getting things together, with an excellent turnout that kept the event going right from 7pm on Saturday through to 6pm on Sunday (still 24 hours, given that the clocks went back an hour on Sunday morning). I was also pleased that a few students from Artemis BJJ made the trip down, Tracey arriving for rolling at the start, while Sam managed to stay for most of it. I only made it for the final hour, as my Megabus pulled into Bristol at about half four, but I still got in some good rolls.

That started off with a purple belt called Nad, who gave me a good squashing. He's prepping for an MMA fight at BAMMA next month, hoping to add to his 7-2 record. As usual, I was trying to use a stiff arm from open guard, both for maintaining distance and recovering from the guard pass. Also as usual against more experienced training partners, he was able to break that down and complete the pass anyway. I'll keep trying: lots of trial and error before I get there. ;)

I also attempted to use the transition to deep half off a technical mount escape, as I was finding I couldn't sit up very effectively. That simply gave up my back, so another one where I need to be careful. I don't think I got my shoulder under all that well, I also wasn't doing a sufficiently good job of protecting my neck. Still, that deep half option does have the advantage that you don't need to sit up. I'll see how that goes for the rest of mount month back at Artemis BJJ, presuming I get stuck in technical mount a few times.

Up next was a long roll with Matrix, who I'd rolled with before at the Chelsea seminar. He's a black belt and therefore was nice to me, allowing me to move before he went for the attack. He caught me in an interesting submission that combined a kneebar with a triangle choke. I think he said there was a third attack in there too, but I had already tapped to the triangle long before it got any further. :)

For my last roll, I had the honour of sparring Pedro himself, who like Matrix was being nice, so didn't crush me as much as he could have. I again tried that stiff arm from open guard as well as under side control, which unsurprisingly Pedro moved past very easily. I had a chance to try Kev's escape from yesterday too, as Pedro went for a choke. I pulled on the elbow and sleeve to loosen it up, but then got caught in choke anyway. Pedro said my mistake was turning towards the arm: I must remember to turn away! ;)

Hopefully these will become a regular thing, as grapplethons are an awesome way to bring together the BJJ community, especially the local BJJ community. I think there were some other clubs there too, from Gloucester. If they do another one, I'm sure there will be even more diversity!

Before that, there will of course be another grapplethon at Artemis BJJ: I'm intending to do our third (and therefore the fifth I've organised) next April or May. Should be cool. If we have even half as much fun as the guy in that video (click the picture) appears to be having, I'll be happy. ;D
slideyfoot at 18:00
Share