I've used Megabus countless times to go to and from London and Bristol, but I've never used it to go to another country. I was curious about the viability after a friend of mine said they had gone with Megabus to get to the BJJ Globetrotter Camp in Leuven a few months back. When I saw that there was an Elizabeth Vigée-Lebrun exhibition in Paris and trains/planes were mega-pricey, I decided to give the much more affordable transcontinental Megabus option a go.

The first difference to domestic Megabus is that you need to check in before getting on. That's a very basic process. At Victoria Coach Station, you join the relevant queue behind gate 19: your bus number and destination will be on a screen, like at an airport. Unlike an airport, it's quick as there aren't any security checks. You just show them your passport and Megabus booking reference, then they give you a pink slip of paper with a number. Head to your bus and show that to the driver, getting on as normal. I only had hand luggage, meaning there may be extra bits to do if you want to carry a load of massive bags with you.

I was on the ME06, which goes from London to Milan, via Lille, Paris and a bunch of other cities. The bus uses the ferry from Dover to Calais: if you're trying to sleep, be aware that at Dover (and Calais on the way back), you have to get off the bus and show the customs officer your passport (it's a little building, where somebody official and bored looks at it and waves you through, whereupon you get back on your bus). 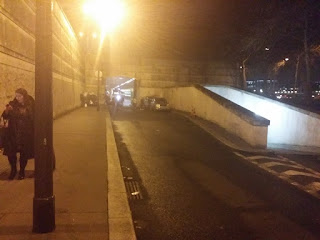 There will almost certainly be a long wait for your ferry too. E.g., having left London at 23:00, we got to Dover customs at 00:45, then onto the ferry at 02:20. Having said that, we only waited about 30 mins on the way back at Calais. The bus stops again at Lille, before continuing to Paris. The stop in Paris at Quai de Bercy is rather less well organised than Victoria (it's the bit in the middle of the pic on the right). You don't get any information screens telling you when and where your bus is arriving, just a long line of stops where if you're lucky, you'll get a slip of paper stuck on a stand with the time and destination of the bus stopping there. Like Victoria it is near transport links, with the Bercy metro a short walk away.

Before heading to France I downloaded the exhibition app that Le Grand Palais has on Google Play, but it's a bit pants (then again, it is free). Everything is in French, except for the English audio guide. That guide costs around £2 and I think is the same as the one you buy for €5 at the exhibition, but it needs a data connection to work. That renders it rather less useful, though come to think of it, there was free WiFi at the Grand Palais (or at least, the Clemenceau entrance, I didn't test it inside).

The guide stops if your phone screen switches off, which is aggravating if you want to listen while looking at the painting (which I would assume is exactly what everyone getting an audio guide wants). I therefore pre-booked an audio guide ticket for €5, especially as I didn't want to run down my phone battery. As it turned out, I needn't have worried: not only does the Megabus have free onboard WiFi, it has several USB charging slots by each window seat. You'll want to pre-book your ticket for the exhibition, as it is a timed entry.

This is easily one of the best exhibitions I've been to, though I might be building it up somewhat due to spending 30 hours on a coach to get there and back. Either way, it has well over 100 paintings on display for your €14 and the audio guide content is good. It covers 30 paintings and provides excellent insight into Vigée-Lebrun: the exhibition is both chronological and thematically cohesive, meaning that the context for the 30 paintings applies to many others too (e.g., there is plenty of discussion about Vigée Le Brun's peripatetic life, travelling through large swathes of Europe during the upheaval of the French Revolution and the Napoleonic wars).

As it's a French gallery, there is the usual assumption that everybody speaks French. That means almost nothing in English at the bookshop and no captions in English, though at least the introduction to each room is in three languages. I always get an audio guide anyway, but in France I'd particularly recommend it, unless you speak French. I tried using my nifty Google Translate app on the captions, which came out garbled but at least gave me the gist. For example, I wouldn't have realised one of the pictures featured a transvestite, revealed when the app translated 'travestis' for me. :)

I would highly recommend you read Vigée Le Brun's memoir (titled Souvenirs) before you go. Unfortunately the English translation I found was old and abridged, but it is nevertheless cheap and available for Kindle. There appears to be a chunk about Switzerland and Madame de Stael missing, but that was the only glaring omission I noticed. It really fills in the detail about Vigée Le Brun's schmoozy aristocratic world, making the exhibition far more enjoyable. If you can read French, there is a much more recent and presumably fuller edition available, along with plenty of biographies and critical works.

The reason I was keen to see this exhibition is that it ties in perfectly with all the reading I've been doing on female painters throughout history (especially the seminal book on the topic by Linda Nochlin and Ann Sutherland Harris). There have been many more significant women painters than you might think (given they have only started being discussed in any real depth in the last few decades), of which Vigée Le Brun is certainly one. I got the lovely treat of another significant female painter, her great French rival, Adélaïde Labille-Guiard. She gets a few pictures in a comparative section of the exhibition, showing the influence both women had in encouraging later female painters.

It was also cool to see a painting I'm already familiar with placed in its proper context. The portrait of Countess Golovine (or however you want to transliterate that from the Russian, I've seen it done various ways) normally lives in the Barber Institute at Birmingham Uni, where I used to go regularly for inter-library loans. It immediately stood out during those student visits, and now at last my curiosity about her has been sated (thanks again to Souvenirs, where Countess Golovine/Golovina pops up a number of times). There were lots of other works from private collections, and to my surprise they even nabbed the Le Brun self-portrait that is normally in that irritatingly inaccessible corridor at the Uffizi.

My timed ticket was set for 11: there was a short bit of queuing, but I must have gotten in not long after 11. I was in no rush and had a good stare, going through the audioguide in detail and reading every caption, which in total took me around three hours (that seems to be the average time for me at most exhibitions). I'd say that you would want at least two hours to fully absorb everything. Thanks to the timed entry, the exhibition space didn't feel cramped. It's fairly large too, which of course helps. I think each room is arranged starting from the painting on your right as you enter, circling all the way back around to the other side of the door: you can double check that by the order in which the audio guide numbers appear in each room. Photography is allowed, with any specific paintings you aren't allowed to photograph clearly labelled as such.

I was disappointed, though not surprised, that the Grand Palais bookshop connected to the Vigee-Lebrun exhibition was almost 100% in French. The main exception is a short book I had already ordered and read before arriving, consisting entirely of flaps, bizarrely (though it does mean that there are several large fold-out reproductions, which is cool). On the plus side, as this exhibition will be moving on to New York and Ottawa, I expect there will be comprehensive English catalogues  and Le Brun biographies available later next year. If you live in New York or Ottawa, you won't want to miss it.

Normally I would go to the Louvre if I had time spare in Paris, but I decided that I would try something different, walking to the Musee d'art Moderne at the Pompidou Centre instead. I've mentioned this many times before, but I struggle to find anything appealing about art after about 1940 or so: I wasn't expecting to find much in the Musee d'art Moderne to my taste. The majority of art I like is from 1450-1750, with a few exceptions later on, like Goya, the Pre-Raphaelite Brotherhood, Vigee-Lebrun herself, plus art noveau and art deco. My main hope for the Pompidou was Tamara de Lempicka, but annoyingly none of the work owned by them was on display (although I think it may be on loan to the de Lempicka exhibition currently on in Verona, so I'm probably going to fly out there next month, as the exhibition looks good. Anybody know if there's friendly BJJ in Verona, as I'll have to stay overnight? ;D).

Still, I did find a handful of works that caught my interest. Natalia Gontcharova painted what appears to be Juggernaut wrestling the Hulk in 1909, while somebody else early 20th century had visions of the Terminator (looked a bit like the guy from T2, I thought) There was a rare example of a Picasso I didn't hate, as it had no vestige of primitivism, cubism or anything annoying like that. Finally, there are a few pieces from Francis Bacon, whose stuff I find twisted but interesting. It probably wasn't worth me spending another €14, but it's good to try and expand your horizons every now and then. But next time, definitely back to the Louvre. ;)

My impressively multi-lingual cousin lives in Paris and I wanted to drop in for a visit. She was away in Naples, but my uncle and aunt were there, along with my cousin's children (I hadn't met her four year old daughter before, so that was cool). They very kindly invited me over for dinner, where my uncle also presented me with a copy of his new book (a selection of historical photos about an intriguing episode in Franco-Turkish relations). My aunt and uncle spoke to each other in Turkish, I spoke to them in German, while they conversed with their grandchildren in French. Like London, Paris is a wonderfully varied city in terms of its culture and ethnicity. Idiot terrorists can try spreading fear with their warped interpretations of religion, but my relatives are just one of many heartening examples of how truly international and diverse a city Paris remains.

Thanks to that same Google Translate app, I was able to have a (very slow) conversation with the 11 year old, which was cool. He was interested to learn more about BJJ: hopefully he'll get into training soon. There is loads of good judo in Paris, along with what I think is the oldest BJJ club in Europe. Perhaps next time I see him, it will be on the mats. :D
slideyfoot at 14:00
Share