Short Review: For Nic Gregoriades' latest instructional, Mike Bidwell of 'BJJ After 40' fame runs through some solid attacks from guard and the mount. Unlike what you may have seen on his popular channel, the techniques here don't require you to backflip around the mat and do the splits, sticking with more human levels of athleticism. It's well taught, clearly explained and the camerawork carefully follows the important details. Available to download here for £40, which gets you a hour of content.

Full Review: The concept of BJJ aimed at people over forty appeals to me. Although I'm not (quite) there yet at 35, training for longevity is something I've focused on more and more over the years. My thinking has been that as it takes me so long to get good at anything in BJJ, I don't want to have to relearn a whole new game a few decades down the line, as my body (especially joints) get older. Hence why I was curious when Nic Gregoriades asked me if I'd be interested in reviewing a new product he's produced with Mike Bidwell, a 47 year old black belt who runs the popular BJJ After 40 page on Facebook (not to be confused with several other sites called BJJ Over 40, like this one, or the product I reviewed a while back by Roy Harris).

I've been shown videos by Bidwell before and discounted them, because it looked far too flashy and acrobatic for my interests. He may be over a decade older than me, but wow, he certainly doesn't move like it! Therefore when Nic mentioned that the product was by Bidwell I was concerned it would be overly ninja. Fortunately on Flow Jitsu (apart from one example at the end), Bidwell keeps his impressive flexibility and movement skills simmering rather than to the boil.

Bidwell teaches at Tai Kai Jiu Jitsu in New York. He produced this instructional in collaboration with Nic Gregoriades. Having said that, Nic doesn't appear to have much involvement in the actual content: he appears briefly at the start to introduce it, but does not take part in the drilling. That introduction is around four minutes, where Nic raises the same concern I had, given Bidwell's unusual attributes. However, Nic was convinced after training with Bidwell that the material would be "adaptable, versatile and effective: guys can take this stuff and use it straight away." As Bidwell himself puts it, when asked about the name 'Flow Jitsu': 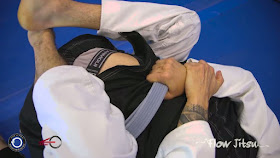 The first technique is what I would call a sit up sweep or hip bump: Bidwell refers to it as the 'outside kimura sweep' (three minutes), not a term I've seen before. His explanation for the name does make sense, as he points out that this sweep often ends up with an opportunity for a kimura. He goes for an unusual grip in the video, essentially getting a figure four grip on their belt (if they don't have a belt, Bidwell suggests grabbing your shin instead).

That's followed by the inside kimura sweep (eight minutes). This time when he sits up, he slides his hand inside their opposite arm, then continues the sweep. Bidwell says this stops them knocking you back down, as well as being explosive. That grip also means you can swivel your hand to move their arm across when you get to the mount, right into the gift wrap (or I guess armbars from the usual s mount). Continuing that much vaunted flow element he spoke about earlier, from that gift wrap, Bidwell shows how to switch right into a bow and arrow choke.

He then finishes with some details on what he calls the 'baby restraint' grip, similar to what I'd call the seatbelt from the back. After a few kimura sweep counters (slightly under four minutes), Bidwell has a section entitled chaining sweeps and setups (three minutes). I probably wouldn't use the term 'chain' for this (which I'd assume would be a sequence going from one sweep to another), but either way it's useful. Bidwell packs in plenty of different variations on grips and posture-breaks for the sit-up sweep.

It's then time to move on from the sit-up sweep to where it lands you in the mount, with Americana setups (six minutes). I rarely get an americana from mount, as everybody is expecting it and their arms are normally much too defensive. Bidwell's approach was interesting. He began by talking a bit about mount in general, sitting on their stomach rather than on the bones of their hips. He goes under the head to set up his attack, rather than attempting to push straight into the figure-four. That then allows him to go for a number of follow-ups, particularly the head and arm choke.

He's got some sneaky ways to make them give that to you, baiting it with more americana attacks and wristlocks. I played around with this over October, as that's been mount month at Artemis BJJ, particularly at one of the women's classes. This section also highlighted the helpful use of close-ups and reverse angles on Flow Jitsu. The camera zooms right in to show you the finer details of grips, often hard to see with a technique like this. With a mounted americana close to the head, there is lots of anatomy bunched together, which the camerawork manages to untangle. 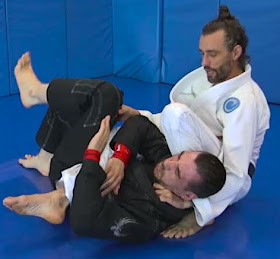 Bidwell progresses with what he calls Americana to peek-a-boo (five minutes). If they push back firmly into your americana attempt, you can bounce off the first arm to the second. For this particular variation, Bidwell gives them some space to put their head under the arm, which again goes right to that gift wrap. Also as before, he can use that gift wrap to set up a bow and arrow choke.

This was the version with a knee behind the head (which I think some people call the crossbow choke? As ever, BJJ terminology is not consistent, so who knows ;D). He also fits in a nifty detail on armbars. Grip higher on the hand as you drop back, above the wrist. That will make their resistance weaker, compared to wrapping under the arm. Bidwell quickly shifts to a bicep slicer after that.

Seatbelt Counters (five minutes) is not about the back, which is what I had initially assumed from the name. By seatbelt, Bidwell is talking about them reaching around your waist from under the mount. This isn't something you'll see much beyond white belt, but it does happen sometimes. The mounted triangle is waiting for you here, which Bidwell finishes by twisting into a corkscrew. If you can't lock your legs, you can armbar them from that upright position. If they wrap with both arms, push down into them, then lock your leg next to their hand. Whether or not you can bring your leg over their head, that flows beautifully into an omoplata, justifying the name of the instructional.

There is bit of a jump after that, as he goes into around three minutes of triangle choke details from the guard (although that submission does of course combine well with the omoplata). Bidwell talks about using a very different set up to the triangle, by which he means the angled version Ryan Hall teaches, where you're looking at their ear. Personally I use the orthodox square-on approach so rarely that this angled approach is the one that now feels standard to me. Bidwell progresses mostly in the same way as Hall, except that Bidwell likes to finish by reaching underneath them and locking his hands. If you don't have limbs that long, he suggests cupping their far ribs with one hand and closing it off that way: the leverage is similar.

Next up, various ways to get into the gift wrap from mount (three minutes). Bidwell calls this the 'face wrap': I've said it many times before, but BJJ terminology is almost never consistent. I'm used to 'gift wrap', but 'face wrap' is arguably more accurate. The set up is they try to block your attempt to choke them once your hand is in their collar, by bringing their hand inside your arm. To counter, you can drop your elbow over to the other side.

That traps their arm underneath, helping you to then get behind their head with your other arm and move into the gift wrap. If they grab your sleeve, re-grip their sleeve and pull it across. If they are being really tight on defence with no arm to grab, that can make it easier to move them sideways by hooking under an elbow (the go-to option for me if somebody clams up tight is to use that to take the back). 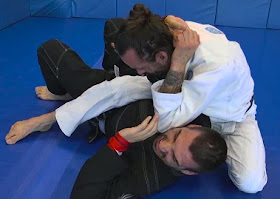 At this point, Bidwell spends two minutes on a technique in his inimitable style, a flashiness familiar to viewers of BJJ After 40. It's one of two times he gets a little elaborate. This first one is a wristlock that starts by grabbing their fingers. I'm wary of small joint manipulation like that, plus the finish of wrapping around behind your head looks tricky. Still, if it's safer than it looks, certainly worth a try as the tap looks powerful. I'd be worried about mashing somebody's figures, but then I err on the side of caution when it comes to injuring my training partners (which is the main reason I pretty much never go for leglocks).

We're back in familiar territory for guard lapel attacks (four minutes). I often go for the gi tail ezequiel, although I rarely use it from the guard. This is therefore a handy demonstration of how to hit it from there, similar to how you would do it from mount (which is where I would normally try it, along with top half and side control). Bidwell adds in the detail of thrusting your knee into them for extra leverage.

Moving on to mount lapel attacks (three minutes), it starts with the same thing but from the top. Another detail where Bidwell varies slightly is that he doesn't chop into the neck, instead using a hammerfist. He's also got another tweak on the set up, wrapping their gi tail around his wrist to help get into position. 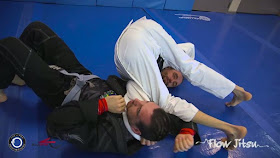 Still on lapel attacks, Bidwell then goes full ninja for five minutes. This the second time he gets right into the flashy material, with some crazy spinning chokes: e.g., something he calls the 'seppuku choke', which is just as fancy as that suggestst. This is way too complicated for me, but along with that wristlock, it's the only time he really gets into his standard BJJ After 40 fanciness.

If you're looking for some well taught attacks from closed guard and the mount, there is plenty for you in the hour of material Bidwell covers. Apart from that last sequence, it is not going to involve anything crazy, living up to my hope that these techniques had some longevity. It wasn't quite what I expected from the title 'Flow Jitsu', but then 'A Few Good Sequences From Mount and Closed Guard' is considerably less catchy. ;)

Available to download here for £40. I'd say that price is a bit high for an hour of content, but it's decent material, well presented.