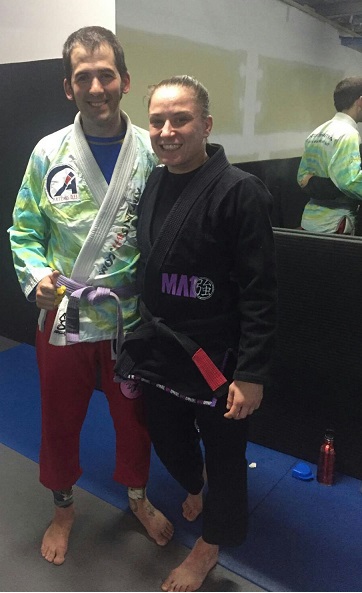 Lachlan started to class with a closed guard drill, where the idea was to try and stand up/control posture without your hands, then with. That's useful for making you focus on posture on top and the use of your legs on the bottom, so I may try that myself. Next up was a hip bump, then switching under the leg if they resist and rolling them to the other side. If that doesn't work either, overhook and push their hand to their chest, into triangle.

Rolling with Liv, I was leaving my neck too open again, must be careful. I think I only prevented her choke due to grabbing her wrist, so no technique on my part. I outweight her a fair bit, even though I'm small: if she'd been my size, that choke would probably have been on.

Next roll, I was super boring and just tried to frame to stop them passing. I think they got a bit bored, especially as they weren't going hard. I should engage more, but then I struggle enough with that in gi, let alone nogi. ;)

I was considering staying for the next class, but I had some things to arrange with a friend for tomorrow, so decided I should head back to get that sorted. It was awesome to finally meet Liv and exchange more than a few words with Hannah. Thanks very much to Liv for letting me train!
slideyfoot at 20:00
Share