Rolling at open mat afterwards was cool. I had another roll with Scotty, the blue belt from earlier. This time, I went for the arms, attempting overhook and underhooks. I initially tried to get my standard shoulder clamp butterfly sweep, but was too flat and I didn't have tight enough shoulder control.

I then tried for an overhook to get Dan's reaching grip, but couldn't manage to secure the arm. Trying for shoulder clamp into pressing armbar, his base felt too solid, I couldn't get the angle I wanted. Dylan was awesome. All the higher belts kept to a nice relaxed pace, letting me work and try stuff. I was attempting to defend my back, using that slow seio have thing, but I think Dylan was taking it easy or I would not have gotten out.

The most useful tips were on shin-on-shin. Angle out slightly, not too much. Your knee is high, but you support it with your arm inside. Head is tight on the other side. Immediately roll under, reaching for the shin of the far leg. If you don't get that, bring what was your shin on shin leg inside their same side leg, then around into single leg x. Your other foot should be hooking their other leg, knees tight. Tilt for sweep, or get ready to move into full x guard. 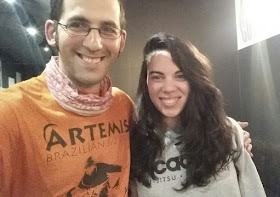 After training, Erin took me to a delicious burger place where I had sliders. For some reason they don't do that much in the UK: they were excellent! It was super cool to catch up with Erin and see what a wonderful place she now trains at. Hopefully I'll get the chance to come back to Melbourne some time, and Australia in general. I'm still keen to visit Brisbane to catch up with some other Australian BJJ friends. For 2017, Academy Jiu Jitsu was definitely the highlight of my Australasian trip. :D
slideyfoot at 20:00
Share