Article #3, by Can Sönmez

Update: If you missed the 2009 live stream, the whole thing has now been released on a six hour long two DVD set. It is all region, so there shouldn't be any problems watching it no matter where you live.

I had an article all ready to go for later this week, but after watching the No Gi Worlds live stream last night and this morning, I felt the need to put something out about that instead. It is potentially a historic moment in BJJ, but not because of the fights. While the action was exciting, with upsets, beautiful grappling technique and even high amplitude throws, it is the medium which may prove truly momentous. 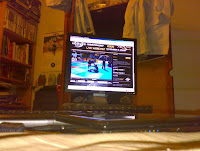 BJJ is known for being an expensive sport. The monthly training fees are often huge, to buy a gi can take plenty of cash, DVDs are far from cheap, and private lessons tend to be an expensive treat. However, Nogi.com, Budovideos and a whole bunch of other sponsors have done something new with Nogi Live. They've released an event for free: no pay per view required, just an internet connection.

You can't complain about free, but as one of the organisers of the No-Gi Worlds live stream warned might be the case, in an earlier Fightworks Podcast interview, there were a number of technical problems from the beginning (which here in the UK was 19:00).

The live coverage stuttered along for the first hour and a half, stopping and starting repeatedly. As you can see from my Twitter feed, I almost gave up at several points. However, I'm glad I decided to give it another try later, as the commentary had kicked in by 20:30. At 21:14, the Nogi live video went down again, but stabilised around 21:22, after which I didn't have any major problems (well, except for my laptop crashing, but I can't blame the No Gi Worlds for that). By the time of the finals at 22:06, the streaming issues appear to have been solved.

There was also a sidebar which didn't seem to serve any purpose. The whole night, it simply read "Upcoming Competitor 1 vs Upcoming Competitor 2". I presume the idea was that this would update as the event progressed, but clearly that needs more work for next time. It would be a handy feature if they could get it up and running.

Initially, commentary was handled by Joanne Spracklen (not Spracklan: the caption was wrong) and Jeff Glover. If you're not sure who Spracklen is, she runs MMA Girls.net, an unusual qualification for BJJ commentary (though she sensibly left the technical side of things to Glover). Either way, they had a difficult job. The camera jumped around from match to match (there were many to choose from, with twelve mats going at once), often with two at the same time on a split screen, making it tough to keep track of competitors. Glover didn't appear to have any notes, so had to rely on his ability to recognise fighters from his personal knowledge of the BJJ scene.

I was particularly pleased by the amount of women's matches on show: in terms of gender equity, the stream was much, much better than I'd expected. Having said that, I did get annoyed at the prolonged drooling over two ring girls, especially when it interrupted fight footage. I strongly dislike the whole concept.

By 21:39, I was watching my third female bout, a trend which continued into the finals. Another four had been streamed by midnight, including the excellent match featuring Sophia McDermott (they appear to have had trouble spelling her name), a methodical Rickson Gracie brown belt. Canadian blogger and black belt Sheila Bird was also competing, in what eventually became an exciting match with Hillary Williams.

There was a notable shift in commentary style for the finals. Glover and Spracklen were chatty, cracking jokes and exchanging anecdotes. Shawn Williams and Sean Patrick Flanery modified the tone, focusing on in-depth technical analysis rather than banter. That is probably a reflection of their experience commentating on the 2008 Mundials.

I don't often bother watching competitions unless there is a good deal of commentary: for me, it doesn't just add to the viewing experience, it makes it worthwhile. Even two people stalling in guard becomes an intriguing battle of wills, if the commentators can provide relevant and interesting technical input (such as noting grips, pressures, angles etc). Getting background details on competitors is great too, fleshing out the athletic endeavours taking place on the screen.

A few hiccups occurred with that commentary, such as the awkward handover shortly after 10pm, which involved several minutes of dead air and paper shuffling. It then completely disappeared at around 00:30, after the finals, but presumably that was so Sean and Shawn could take a break, given that this was a live event.

Once the finals and ensuing discussion had finished, there was an extended period of bouts with no sound at all, from 02:17 until 02:55, after which the screen went black. I went to bed a bit after 3am, so not sure if and when the absolutes took place: something to look forward to when I wake up, I guess. ;p

Interestingly for a BJJ competition, it wasn't just BJJers. Renowned MMA champion and catch-wrestling proponent Josh Barnett made a triumphant appearance in the black belt division, despite holding no BJJ rank (for his explanation prior to the event, click here). Satisfyingly, there was an interview with him later on, at 1am, one of several (including Kron Gracie, somewhat randomly) to fill in the time before the absolutes. This was a fabulous idea, especially as the two Seans did a brilliant job with the questions. So, definitely something that should be repeated for the next event.

I'm hopeful there will be other free streams, which I guess will depend on how much attention the advertisers receive as a result. All in all, this turned out well, so if the connection issues can be ironed out, perhaps this could be the future of BJJ broadcasting.