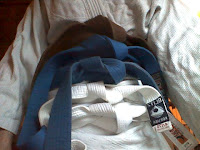 As far as I'm aware, the idea of using belts to reflect rank was first popularised by Jigoro Kano, who is easily among the most important figures in modern martial arts. According to JudoInfo, Kano's senior students began wearing black belts in 1886, signifying their higher status. It took until 1930 to bring in another colour, an alternating red-and-white belt. BJJ was once similarly sparse on rank, as Royce Gracie explained in a recent interview:

In my father's old days, in the beginning, the history of jiu jitsu let's say, there was a white belt, a blue belt, and a navy blue belt for the instructors. That was very hard to get, it wasn't just anybody could get it. There were no stripes, just plain blue belt. That's what my father used to use for the longest time, until about 1970s, when people create the Brazilian Jiu Jitsu Federation. Under pressure, my father kinda give in, and told the people, "Go ahead, do the Federation." That's when they came up with all kinds of different belt colours, and they award him red belt, ten stripes.


The JudoInfo article goes on to state that in 1935, Mikonosuke Kawaishi introduced a more extensive system in Europe, ten years after Carlos Gracie opened his Rio academy. The reason is telling: "[Kawaishi] felt that western students would show greater progress if they had a visible system of many coloured belts recognizing achievement and providing regular incentives."

This continues to be a major factor in why people like to get new belts. It is human to crave praise, from your mother smiling at some abstract scribble you produced at the nursery, right through to your boss congratulating you on a job well done. In BJJ, belts are supposed to be a direct reflection of ability, meaning that in a legitimate school, promotion can be a cause for great pride. You've accomplished something, and are now being recognised.

The purpose of a belt is to mark your progress. That makes it easier for the instructor, if they're looking for an uke, or if they want to match people up during sparring. It also grants you greater access to competition: if you've spent the past year or two smashing your way through all the white belt tournaments, then you're going to get a lot more out of competing at a higher level against challenging opposition.

Yet many people feel undeserving upon promotion. What if you haven't been dominating at competition? What about that one girl in class who always manages to pass your guard? Or the big white belt who tapped you with an Americana yesterday: why isn't he getting promoted?

The only absolute is your instructor's faith in your ability. BJJ leaves you in no doubt about your failings, as the mat is a harsh critic. There are always areas to work on and people who can painfully expose those mistakes. In BJJ's highly subjective ranking system, it is essential you feel able to trust your instructor's opinion.

If the instructor is worthy of a student's trust, due to their honestly earned rank, then BJJ's meritocratic grading process falls into place. This is why it is so important to maintain the direct link between ability and status in BJJ belts: any frauds who seek to debase rank must be exposed. Many other martial arts have lost all credibility due to compliant belt examinations, where the candidate is never truly tested. If performance against full resistance is not a central part of promotion, the belt becomes meaningless.

At the same time, obsessing over a piece of cloth instead of concentrating on your actual ability is detrimental. After all, Hélio eventually gave up his impressive red belt with ten stripes, preferring instead to wear one of those old blue belts. He didn't need a belt to demonstrate his skills: he already had incontrovertible proof, in the ring and on the mat.