A London throwdown is still yet to happen, but venues are getting steadily closer. Last year there was a meet-up at Andy Roberts' gym in Farnborough. For 2010, a guy posting on Bullshido as Mr P set up an event at the Evolution Gym in Southend, a short walk from Chalkwell train station. 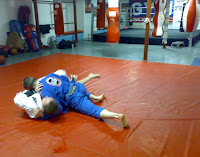 The venue itself is easily the best I've seen out of all the throwdowns I've been to. Not only is it spacious and clean, with a cheap attendance fee (£5 per person), but it has a cage and even a running camera. You can buy the film, very handily transferred to a USB drive, for a mere £3.50.

Transport was a bit of a pain, as trains keep being shit on weekends. I had a replacement bus in the morning getting into London, then another one part of the way to Chalkwell (the train from Fenchurch St got me as far as Pitsea). Still, despite those replacements, it is only around an hour to get to the Evolution Gym from London.

As ever with throwdowns, there were lots of people who were due to attend, but eventually either didn't show up or had to pull out at short notice. Still, there were nevertheless five of us: Ben (who posts as Asriel), me (slideyfoot), Aaron (Mr P, who organised it), Colin (Liffguard) and Dan, Aaron's friend. I arrived early, then had a chat with Dan after he turned up, until eventually Ben walked through the door, meaning we could have a flow roll to warm up.

I rolled with Colin after that, which went much the same as last time back in 2007. I think my defences have improved a bit, but it was still largely me stuck under knee on belly attempting to squirm free. I made sure to be active, and was looking to try Kev's escape, but instead found myself bridging and shrimping a lot, without managing to fully escape.

The technique Colin eventually tapped me with was interesting, and hopefully that will be covered on the video. He showed it to me afterwards, a kind of choke from knee-on-belly. He had a grip on my collar, then brought the other arm over my head, sliding his elbow back to my skull. From there he moved off knee on belly and sprawled back, using body weight to effect the choke.

We then did a load of drilling, all guard passing. I started with my preferred twisting guard break, getting a helpful tip on a guard pass from Colin. If they grab your collar, immediately grab that arm with your same side arm, then stand up (making sure to step up on the same side leg: otherwise, you're helping them to set up a submission).

That means you can now move into the usual pass where you have a grip on one sleeve pulled up high, pop their leg off your hip and slide your knee through. At this point you could switch your grip from their sleeve to under their leg, or alternatively, grab the gi material around their knee. This has the advantage of stopping them turning into you or bridging, and could also help shifting to mount later. To finish, swing your other leg over and sit next to them, settle into side control.

I also had a quick run through the Gracie Gift variations from Roy Dean's No Gi Essentials, before a brief spar with Dan. Upon getting to mount, it turned out he hadn't done much in the way of mount escapes before, so I paused to show him the basic trap and roll and then the elbow escape.

Due to that lack of experience with mount escapes, I assumed he must be quite new, so I could take it easy. However, he immediately pushed forward hard in the guard, grabbing hold of my head and moving into a sort of rear naked choke on the face. That isn't comfortable, but it isn't generally going to lead to a submission. I eventually popped out and tried moving to the back, also looking for mount.

Somehow I ended up under side control, where I was looking to recover guard by jamming my other leg through. Unfortunately, I must have done it too explosively, as my left leg completely cramped up, meaning I had to tap and stop. Same thing happened with Kev a little while ago: something I need to watch (or eat/drink better, to avoid cramp).

While this was going on, Ben was involved in a mammoth spar with Aaron, who is a big guy. After twenty-five minutes, Ben was unsurprisingly pretty tired, but as he isn't small himself (90kg or so), he could still manage a roll with me and take it fairly easy. I played some open guard, but again I'm not really sure what I'm aiming for most of the time (though at least here, I had a De La Riva sweep to try that Colin had shown earlier, where you scoot around behind and take their legs out, putting them in your back mount).

I was also putting the blocking the arm and shoulder principle into action, which is something Demian Maia talks about a lot in his DVD, in terms of preventing their pass. Roy Harris also delves into the topic on Roy Dean's first DVD, when he is talking about points of control from open guard. It definitely helped, though my grip slipped on a later attempt, meaning Ben could collapse my arms and move past.

We all went down the pub after that, with the usual long chat about forums, BJJ and MMA. I always enjoy that chance to socialise after throwdowns, and it is one of the big reasons I go. I'm not sure when the next UK TD will be, but this venue in Southend is definitely a good option for the future. Just a shame it is so difficult to get people to actually show up! ;)

There should be a lot of video footage on the way, so once that is all sorted, I'll be able to do a major update with all the sparring, and hopefully clips of the techniques Colin showed me too. My video editing skills are very limited, but playing around with MovieMaker should be sufficient.
slideyfoot at 23:02
Share