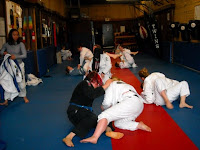 About 3 months ago, using what must have been some sort of black belt trickery, Klint Radwani (my instructor) convinced me to teach a women’s class at our academy. I hesitantly agreed once I was absolutely sure that there was no way our purple belt woman could do it. Of course, when I agreed, I was sort of banking on this class starting sometime in the future. The distant future. Instead, it would start on the first Tuesday of May. I had two weeks. Crap.

So, I did what any panic-stricken gal would do – I dashed off an email to friends of mine who teach women’s classes and begged for help. Adrienne Adams (Yamasaki), Jen Flannery (Fifty/50), and Alaina Hardie (MECCA MMA) all started teaching women’s classes back when they were blue belts, and were kind enough to talk me off of the proverbial ledge and back onto the mats where I belong.

With some excellent advice from them, I got my head back into the game and got to work on my game plan. Common themes from all of the women – develop consistent patterns, show movements that the women can build on from class to class, and reinforce what they already know. With these things in mind, I developed lesson plans for May and June, starting with the positions that I always wished I had spent more time working when I first started jiu jitsu. 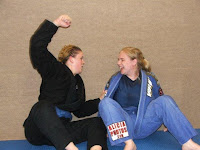 Klint wanted to ensure that any women who were only attending this class would be getting self-defense techniques, so each class would need to include at least one of those. I have eight self-defense techniques that relate directly to jiu jitsu that cycle through the classes, and I tie them to the lesson for each week. Other than that, I could teach whatever I thought would be most beneficial. Knowing that I would have a mix of experience levels (including women that outrank me on occasion), I started working on a curriculum that would be scalable enough for beginners to jump in, but would also offer a challenging session for the more experienced women as well.

After I had the first nine sessions outlined, I asked for feedback from everyone I’ve already mentioned, plus Valerie Worthington (Carlson Gracie/New Breed). Val has a background in both BJJ and education, and among other things, she recommended being prepared to handle the “But What Ifs” (aka Mission Creep) in each class. I tried to do this by teaching both sides of each technique. For example, if I teach a submission, I will also teach the defense. I’ve used this format since the first night. This way, the students all know that they don’t need to ask how to defend that cross choke because I’m going to show them in the next section. Then, they’re going to start sparring from that position so that they can work on the submission and the defense. I like to make sure the women are getting some sparring time in during each class, and to see that there is a practical application for these techniques.

In the next installment, you’ll hear about the first week of classes, and what I hope the future will bring for the Yamasaki Jiu Jitsu women’s classes.