Now that I’ve got lots more time to play on the internet again, I had a chance to update my blog list, thanks to the always excellent BJJ Grrl, who keeps lists here and here. Bunch of blogs I hadn’t seen before by female BJJers, like Shakia, Amy and Val.

I’d also like to give a shout-out to fellow BJJ blogger Dev Kostal, who recently received his purple over in Peru. Very cool: I imagine he is going to do a longer write-up in the future, but some pics on Dev’s blog, here.

Due to the trains acting up, I almost didn’t make it to the beginner class. Instead of stopping at Acocks Green, the train from Dorridge decided to go right through to Birmingham. Fortunately, I was able to grab one back the other way not long after, then sprinted to the gym. It goes to show how short a walk it is to the train station that I was able to run there, get changed, grab my card and get on the mat in under four minutes. Made the warm-up tougher, but at least I arrived in time. 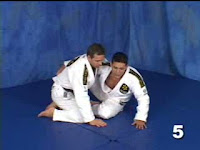 Dave ran through the same two passes Norby showed last week, where the idea is to treat your partner as a steering wheel. Dave emphasised staying tight with the grips, so always clamp your elbow down when gripping over their back. He also pointed out that when you’ve spun them onto their back, try to switch your knee, so that the one nearest their legs is tight against their hip. That will prevent them from shrimping in that direction, giving you time to put your hand there.

On the second pass (which Norby demonstrated during last Monday’s advanced class), where you pivot on your foot and drive your raised knee into their leg, shoving their knees together with your hand and step around, Dave noted you need to have a grip by their back too. That will help control their upper body, and means you can slip your arm around to a strong side control position as you step around behind them.

There was no sparring again, as we spent a good long time drilling. That works well when I want to double up, as it means I can concentrate on technique. It is especially good when Norby runs the double, as he tends to teach the same techniques in both classes. This is ideal, because you first get a basic version, with the broad outline, followed by the more detailed explanation in the advanced class. Perfect for when you don’t have time to scribble notes down on a pad. ;)

At some point, I managed to inadvertently demote myself to two stripes, as it must have fallen off during class: it’s been gradually ripping in half over the past few months, so not a big surprise. Useful reminder that stripes are often pretty meaningless. ;p