I’ve mentioned Leslie’s blogroll over on BJJ Grrl before, but I haven’t made a concerted effort to go through for a while. I copied it over to Excel recently and then compared it against my blog index (still need to update it, but should be at least 100 extra blogs): loads I was missing, so lots more for me to read. So far, I particularly like Kirsch’s Korner, Family Mat-ters and Gi Funk. Speaking of bloggers, perhaps some of them will want to put their details on the blogger map, for future blogger training meet-ups. Either way, thanks Leslie! :D 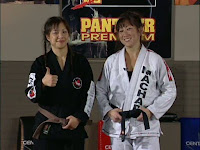 Also, back when I posted up my review of Cindy Omatsu’s DVDs, a number of people mentioned they’d had trouble getting hold of that set, which originally came out in 2005. So, they might be interested to hear it is apparently back in stock at Budovideos, currently for about $57. Apparently only two left at the moment, but I’ve no idea if that’s a marketing thing or not.

Speaking of Budovideos, they are also running a live stream for the No Gi Worlds on the 7th November. However, unlike in 2009, this time it is pay per view: you can buy tickets here. Although it’s only $10, so still pretty good value, it is nevertheless a shame they weren’t able to keep it free. I guess after their trial run last year (along with the Worlds and Pan Ams this year), the advertising fees weren’t enough to cover all the costs.

Kev was working another night shift, so class was headed up by Mat Burn (which remains an awesome name for a BJJ instructor: yes, he gets that along, but the novelty hasn’t quite worn off for me yet! ;p). Matty went through a basic push-through triangle, shoving their hand into their stomach before going through the technique as normal.

To finish up, there was the same guard break as Tuesday (although Matty prefers to pull up on the sleeve, rather than shoving it into their hip to start with), then a leg pin pass. Here again Matty used a slightly variation, as instead of reaching around their leg to grab the collar, he instead switching the grip on their sleeve, meaning that you’re holding onto their arm rather than shoving your forearm into their throat.

Specific sparring was from guard, with one of my favourite training partners, Howard. My efforts at the twisting guard break and Colin’s pass weren’t particularly successful, but as Howard is a blue, he was much more likely to open his guard and attack than the white belts I was sparring on Tuesday. That meant I had a couple of opportunities to try and pass: I secured the double underhooks, but failed to get past. I think the problem there is that I’m not driving forward enough, and I should also pull their legs towards me to help stack them, as that gets their hips in the air.

Pushing their leg down and doing a big step over it, as per Kev’s private lesson, is starting to become more instinctive. That means I’m finding myself moving to half guard quicker than before, but with blue belts, they’re normally able to get that knee in the way (in what I think is called z-guard). The knee was frequently in the way, as Howard went for the scissor sweep a number of times: I’m sure there is some kind of pass where you shove that knee down and walk round, so something for me to work on.

Underneath, I wasn’t doing enough with half guard, and I still tend to end up on the wrong side with my upper body: I need to fight harder to get that underhook on the same side as the leg I’ve trapped. At one point in full guard, I found myself with a loose armbar, but wasn’t able to readjust or switch to anything. Looking for the triangle is becoming more natural, but I don’t yet feel confident switching to an omoplata or armbar, which is another thing I want to improve.

Things weren't too dissimilar when we moved on to the extra hour of free sparring (or half hour, in this case, as we were inadvertently running on Brazilian time). This time there was no stopping, so I was able to try and take the back after Howard got to his knees from my half guard pass attempt. I got in one hook, but totally failed to get the other one secure (Howard was able to easily just push it off his hip).

I had a relatively relaxed roll with a white belt after that, where I was sitting in the overhook from guard looking to do something. Eventually, I was able to pop my leg over the free arm, but had a brain freeze and somehow managed to try and fling the wrong leg behind the head, which was incredibly stupid of me. Clearly I was getting a bit too comfortable with that overhook, as I forgot I had it. D’oh.

Sparring finished up with Matty, where again I had a chance to do that step over the leg and go for half guard. I thought I was going to get flung straight off, but managed to keep my base, using a grip around the head and armpit and keeping a leg back. Or at least I did the first two times: third attempt, I found myself under side control, and then suddenly mount. I must have been lazy with getting my knee up, which is a fundamental error. Although I later managed to roll back to get on top in guard, Matty immediately reversed me: I need to make sure I settle my base when I sweep, or the momentum could work against me, like it did here.

I won’t be training again until 26th of this month, on Tuesday, as I’ll be down in Bristol with my girlfriend (along with a few other places: we’re visiting friends up in Lancashire, as my gf is the head bridesmaid for their wedding – or whatever the name for that is – so she has a dress fitting). Although it would be nice to check out Gracie Barra Bristol, I don’t think I’ll have a chance this time round, as classes start at 7pm on weekdays. My gf might be a little annoyed if I absconded to go get sat on by sweaty men. ;)

Tomorrow, I'll be putting up another piece from Chrissy on the women's jiu jitsu program she's been running. I'll also look to get something posted on here during the week off training. I'm most of the way through doing a book review, or I might be able to whip up some kind of article.
slideyfoot at 21:00
Share