Having reconnected with my paternal heritage in Turkey last year, I did the same with my mother's side of the family over the weekend in Germany. As I had essentially one day, that wasn't too extensive, but I was still pleased to finally make it to Aachen (apparently I've been before, but was too young to remember). It has multiple connections for my family, as my mother was born and grew up there, met my father while he was studying at Aachen University, which in turn resulted in my sister being born in the city as well. 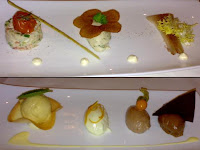 However, that wasn't the reason behind the trip. My mother's parents have been married for sixty years, so wanted to celebrate with a Diamond Anniversary in Maastricht: rather generously, they paid for all of us to fly over and stay at Hotel Klein Zwitserland. Judging by the rooms, I'm guessing it isn't cheap, but if you can afford it, I can unreservedly recommend the food, which was brilliant. Although the servings look small from the picture I've added on the left, there were plenty of courses, so we were all feeling stuffed by the end of the night. The views are also pretty spectacular, as long as you're on the right side of the hotel (otherwise you can just see a row of houses).

We were only in Maastricht for Saturday night and Sunday morning, spending the rest of the day at my aunt's house in Mönchengladbach: she drove us over to Aachen on the Monday. Christmas for me is never complete without Aachener Printen, a slightly chewy gingerbread biscuit they make here. If you're planning to pick some up yourself in Aachen, don't buy them in the centre of town. There's a Lambertz factory outlet on 9 Ritterstraße, where you can get a massive bag for €10.

First port of call was the pub/restaurant where my parents met thirty years ago, Die Goldener Schwan, which is in the main square: still looks much the same, according to my father. Aachen isn't especially big, so the three main sights are all within easy walking distance. Opposite that pub ('kneipe' in German, if you're looking for one when you're in the country) is the Rathaus. It dates back to the 14th century, but has been burned down several times and also took a pounding during World War II (there's a film running inside that shows the devastation), so the only original part left is the eastern tower.

Then again, that also means you can see a range of architectural styles inside, from the baroque rooms downstairs to the medieval hall upstairs. You also get a fabulous view of the cathedral from the second floor window. Though there isn't a huge amount to see, the Rathaus is pretty cheap to enter at €2.50 (or €2.00 if you're a student: they don't seem too picky about ID, as my NUS card didn't even get a cursory glance).

The Cathedral ('Dom' in German) was where we headed next, and is by far the highlight of Aachen. It is also free, which makes a refreshing change from exorbitant English counterparts like St Paul's and Westminster. The oldest and most attractive section of Aachen's cathedral dates from the year 800, and if you've been to Istanbul, you'll recognise the Byzantine influence. The mosaics are all beautifully intact, though that's because (if I'm remembering my Kenneth Clark correctly) they are 19th century reconstructions rather than the originals. If you do happen to go to both cities, then I'd strongly recommend you check out the Church of SS Sergius and Bacchus in Istanbul for comparison.

Unfortunately we couldn't go and see the famous throne, where the Holy Roman Emperors were crowned from 936-1531. To see it properly, you have to go on one of the regular tours, but they weren't running that day because they were tuning the organ (which made for some decidedly strange ambient music). Then again, the actual throne isn't that exciting to look at, so without the historical significance, it wouldn't attract much attention.

It is known as the throne of Charlemagne (Karl der Große in German), who is the most notable figure associated with the city. He made Aachen the capital of his empire, and given his status as not only the first Holy Roman Emperor but the legendary progenitor of the French kings, he makes for a useful tourist attraction. There are therefore references to him dotted all over the place, including statues, the annual Karlspreis (various exhibits in the Rathaus on that) and the local Karl's Apotheke (a pharmacy on the main square, which has a plaque outside proudly stating its heritage dates back to 1615).

He also dominates the third major sight in Aachen, the Cathedral Treasury ('Domschatzkammer'). This is round the corner from the main cathedral, and costs €4.00 to enter. For an extra Euro, you can pick up a handy little fifty page booklet talking about the contents of the treasury, although it isn't in any kind of order. Unsurprisingly, most of the items on display are religious, with a large number of reliquaries.

If you're a fellow fan of art, then you'll enjoy the Passion Altar, painted in the early 16th century. The name of the artist isn't known, so as a result of this work, he is referred to as the 'Master of the Aachen Altarpiece'. That title is a little misleading, as it was actually intended for a Carmelite church in Cologne (Köln), but was later moved to Aachen. There is also a Roman style sarcophagus, decorated with a representation of the abduction of Proserpine/Persephone: this held Charlemagne's bones, until he was canonised. That meant they could then chop up what was left of him to put in the aforementioned reliquaries.

We flew into Weeze (presumably because there was a cheap deal through Ryanair), but as we could get a lift from relatives, I'm not sure how easy it is to get from there to Aachen via public transport. Driving takes about an hour and a half. Maastricht Aachen Airport is another option, or you can hop on a train from Köln.
slideyfoot at 22:00
Share