For a fighter, I’m not much to look at. I’m an average sized girl: 5’5’’, 135 lbs. In a sport dominated by men, most of my opponents boast a significant weight advantage. Add onto that the spastic craziness of a new, white belt male and you have a creature I like to call the beast-man.

I used to complain about the impossibility of grappling beast-men. They were too big and strong. They used too much muscle. I cringed at the thought of grappling them, secretly rejoicing whenever my instructor, Fabio, assigned me to grapple someone with a little color on their belt.

When I got my blue belt, my distaste for beast-men increased. I felt I had something to prove. I was supposed to be more technical than them now, right? Mysteriously, that technique was missing on the mat. I was still getting crushed. The more I tried to beat these guys the more frustrated I got.

My breakthrough came when I realized I was looking at them in the wrong light. Beast-men weren’t my enemies. They were my training partners. Not only that, but I realized that these guys, with all their strength and spasticness, were some of the best training partners I could ask for.

I realized I only wanted to defend myself against people who were going to attack me nicely. I was complaining about the most realistic mock attackers that I would get in a safe setting. Having training partners who relax and teach me things is an invaluable treasure, but having guys whose only goal is to crush me into oblivion is equally valuable.

After I stopped looking at these guys as evil villains who wanted to ruin my evening of happy grappling, and started looking at them as real-life scenario tests, everything changed. I took the pressure off myself to perform. I stopped letting my own frustration and anger cloud up my mind while I was grappling. Instead of thinking about how unpleasant the grapple was, I started thinking about what I was doing; paying attention to where I could move, where they were off balance, where both of us were vulnerable.

The results were instantaneous. Not only did I grapple better, but I started growing again in general. I started enjoying jiu-jitsu again. I stopped hating the beast-men and actually learned to look forward to the challenges they present. 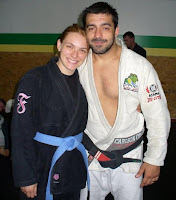 It doesn’t matter whether you’re big or small. Eventually, you’ll encounter people that seem created for your misery. When you come up against them, the difference between frustration and growth is your point of view. You can decide to complain, or you can be thankful that beast men are there to point out the holes in your game. You can be the victim against an insurmountable enemy, or accept the challenge of a training partner who has something to teach you. The distinction is yours to make.

Allie McClish is a blue belt, who has been training Brazilian Jiu Jitsu for a year and four months under Fabio Novaes in Florida. She maintains a blog at Allie the Clear Belt.