Five years ago, I ordered a Blitz Kokuba gi through the Warwick Judo club. It cost me £20. I got injured before I actually had a chance to wear it, but it did finally get some use the following year. By then I'd sufficiently recovered for my first experience with BJJ, an introductory session with Oli Geddes. That gi has served me extremely well: in over four years of training, the only damage has been a small rip on the knee, sustained towards the end of 2009. 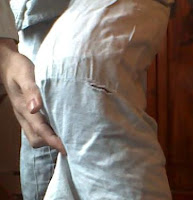 Those trousers are without any doubt the softest and therefore most comfortable of all my gis. I never got round to patching up the knee, though as the jacket hasn't shown any significant signs of wear and tear, I've continued to wear it with one of the other four pairs of gi trousers I have. However, as you can see from the picture, the rip by the knee is pretty small, so I'm sure if I had the inclination, it wouldn't be difficult to fix. [Update Feb 2011: Now sewn up, so the trousers are back in rotation with my other gis.]

I really like the fit, so until the trousers developed that rip, this was my second favourite gi after the Padilla & Sons Gold Weave. My Blitz Kokuba has 4/170 written on the inside label, which seems to be roughly equivalent to an A2, if like me you're used to BJJ sizes: for reference, I'm 5'7 and 65kg. It comes with a white belt, although if you're buying this for BJJ, I'd note that there is no rank strip (judo does not not use stripes in the promotion process). There is a black logo on the end, but it is too small to use as a substitute.

As this is a judo gi, that means the skirt is longer than you would find in a specifically BJJ gi, and possibly a bit baggier. However, I've spent four years training BJJ in the Kokuba, and I can't say I've noticed much difference between this and any of my 'BJJ' gis (I've got two Padilla & Sons and a Tatami Zero G, along with another judogi, from Black Eagle). The Black Eagle is a bit baggier, but that could be because I think I washed my Kokuba more harshly: I wasn't as careful about avoiding the spin dryer until I got my Padilla, which has some helpful washing instructions included.

There is some discolouration on the seams inside, where the bleach has faded, but that is also true of my Padilla & Sons Gold Weave, which is my next oldest gi. The Kokuba is comparable in weight to my Zero G, and it is clearly sturdy, given how long the jacket has lasted and the minor damage to the trousers. Having trained in both judogi and 'BJJ' gi since 2006, I can happily recommend beginners pick up a judogi as their first purchase, because they tend to be much cheaper than their flashier BJJ counterparts. It is also a good option if you're looking for some more gis to cycle through while you're washing and drying the others. 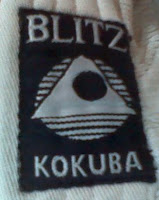 Another advantage of a judogi is that it doesn't suffer from the BJJ billboard effect. There are only two small patches on the Blitz Kokuba, at the bottom of the lapel and by the right hip. I much prefer the look of a plain, white gi (which I've talked about before), which is why I own two judogi.

If you're about to start judo rather than BJJ and are looking for a gi, then I've got less classes on which to base a judgement. However, I have worn it to judo training, and there is some coverage of takedowns in BJJ (though of course not to the same extent: despite being closely related, there are a number of differences between judo and BJJ), and not noticed any problems.

For some reason it is rarely listed as a Kokuba: when I see it sold, it has the rather more faceless title of 'Blitz Sport Adult Student Judo Gi'. Either way, you can buy one here. If you're a student at Warwick Uni, the judo club no longer sells the Kokuba, as I believe they have a wholesale deal with a different supplier now.

Update May 2016: This gi is still going strong, or at least the jacket is (as I didn't want to pass down the trousers, due to that small rip). My student Kate has dyed it a delightful shade of pink and uses it as her main gi. :)
slideyfoot at 11:32
Share