Kev has recently set up a blog for RGA Buckinghamshire (the place I train: I refer to it as RGA High Wycombe, because that's the location I go to. The main club is in Aylesbury, with another branch in Bletchley). Check it out here. Kev is planning to keep it regularly updated with the latest news about RGA Bucks. 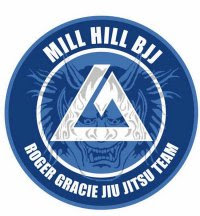 Due to the bad weather, Kev closed down for the Christmas break a few days early. So, I decided to take the opportunity to check out another RGA affiliate, in Mill Hill. Nick Brooks' club is the first RGA affiliate, as far as I'm aware, which was later followed by Farringdon, Kilburn and the rest of the growing RGA family. I've trained with Nick before, having been taught by him a couple of times back when he was a purple belt, and also rolled with him (I remember getting footlocked. A lot.)

This was the first time I'd experienced a Nick Brooks class at his own school. It is relatively easy to get to: I hopped on the underground, going from Marylebone to Oxford Circus on the Bakerloo, then the Victoria line through to Kings Cross, and finally an overground train to Mill Hill Broadway. If you head out of the station, down the stairs and past the buses (bearing to your left), you will eventually turn onto a street called The Broadway.

Follow that round to the left until you hit Bunns Lane. Keep on going down that road (you'll have to cross over a couple of times as the footpath appears and disappears) until you see a little industrial looking complex, with a music centre and a car wash. If you go in there and walk past the units with music blaring out of them, you'll eventually see the distinctive Mill Hill logo, with two big tyres outside (presumably for the strength and conditioning sessions).

There was a pretty good turnout for the day before Christmas Eve, mostly white belts, but also a blue and a purple belt present too. Nick was very welcoming to both me and another guy who was visiting from Gracie Barra Essex. After getting changed upstairs in the lounge (bunch of sofas, heaters, a big TV, grappling magazines and a copy of The Gracie Way: you couldn't ask for much more), it was time for class.

The warm-up was interesting, as Nick had us do what he called 'jiu jitsu chess'. I've heard about that in the context of Hélio Gracie before, where the idea is to take it in turns getting into different positions. You don't offer up any resistance, just let your partner test something out, then you respond from whatever position you end up in. Not something I've done before: essentially, it felt like the step before flow-rolling.

Nick then asked the class what they wanted to do, settling on the purple belt's suggestion of practicing some half guard sweeps. The initial two were from a knee shield/z-guard, while the third switched to half butterfly. I particularly liked the last one, as that works from when you're stuck under a dominant half guard.

The first half guard sweep begins in typical half guard, with the modification that you insert the knee of your outside leg into their hip. If you can, you want to get the shin across, but you also need to be able to lock your feet, or at least wrap your instep by your heel. If you leave your legs open, they can simply raise their trapped leg and pivot, bringing their lower leg through the gap between your feet.

Nick said that the far underhook was less of an issue than the cross-face, so having got onto your side with that knee braced against them, put both hands on their cross-facing arm to block their attempt to get their shoulder into your face. Get a strong grip on their sleeve with your top hand (which will therefore be a cross-grip, as that will be the opposite arm).

Your other hand reaches under their same side leg, grabbing the bottom of their trousers (not inside the cuff though, as that is illegal). Pull their sleeve and drive your knee into them, so that you're basically doing a scissor sweep, but from half guard. It is integral to the technique that you don't let go of those grips.

Also, don't get over-excited and try and jump right into side control. Instead, you're just going to roll your hips, staying low and pressed into them the whole time, hip to hip. As you are still holding their leg, they can't re-lock their half guard. You can simply move your trapped leg backwards to stretch out their leg, then loop it around, moving into side control.

You also still have that grip on the sleeve, which sets you up immediately for an americana. You have a number of options to secure the figure four, depending on how you're holding that sleeve. One way is to control their arm with the other hand to then re-establish a better grip on the wrist with your first hand. Another is to roll your hand forward or backwards to change from the sleeve to the wrist. Or you could try pressing your head into their arm, and use that to hold it in place while you get the proper grips.

That was followed by a variation on the same half guard sweep. This time, you've gone for the scissor motion, but they have moved their head in the opposite direction your knee shield is pointing, which shifts their base. You can no longer get the half guard scissor, but in changing their weight distribution, they have opened up an alternative.

Open up their arm with the sleeve grip, so that they move perpendicular to your body. This also means you can shift your knee shield so that they are balanced on the shin. If you get this right, they should feel fairly weightless. All you need to do now is roll backwards over your shoulder, still holding on to that sleeve grip. As before, you'll end up in side control with the americana ready to be applied.

Finally, Nick demonstrated how even when you've messed up and are stuck underneath half guard, and they have a strong cross-face and far underhook, you can still get a sweep. Start by opening up their lapel with your free hand, on the opposite side to the leg you've trapped. Bring that gi material over their back and feed it to your other hand: this grip needs to be tight, so you want to work your hand as close to the armpit as you can.

Shrimp out towards the trapped side (you'll have to release your locking leg to do this, so keep the inside leg heavy on their calf to stop them passing). You may need to do this a couple of times, until you can insert your outside foot under their inner thigh. This means you are now in half-butterfly.

With your free hand, pin the arm they have under your head to your skull: note that you want to avoid them bringing their knee up into your armpit, as that gives them better control. You can now lift with your butterfly hook, stepping in with your other leg if you need additional leverage (same as with the orthodox sweep from full butterfly guard).

Don't get greedy and try to go straight to mount, as they will probably snatch half guard. Instead, as soon as your knee hits the mat, switch your hips so that your other legs swings over, putting you in side control. This is much safer. Of course, it is not a bad thing to get mount, but due to that high risk of getting caught in half, it makes more sense to go for side control in this situation.

Nick had everyone who wanted to spar line up against the wall, whereupon he matched us up. I started off with a white belt, which gave me a chance to work my offence. I played around with that same spider guard attack where you're pressing into one arm with both feet, but didn't quite get what I wanted, as I think my posture was a bit off: I was falling off to one side. I also went for a handstand sweep, although I think a higher belt would have punished me for my sloppy transition from there.

Next was the purple belt, which of course made for a tougher roll. It also meant I could test out the running escape again, which seemed to work fairly well in terms of defending myself, but not much more than that (though of course hard to know if they were taking it easy on me or something like that). I concentrated on preventing their arm from getting around my torso, or if they did, locking that up with the intention of using the space they want to attack in order to effect my escape (although we didn't get that far: mostly just stayed in a 'survival' position, attempting to feel if there was any space opening up).

For the rest of the class, I went with Nick. As with Kev, he is so much better than me that he took it very easy, leaving openings to see what I'd do. Also as with Kev, that resulted in me mostly staring at him from open guard. I was trying to go for a couple of things, like the spider guard attack again, but got nowhere with that. I also wanted to try sitting guard, but couldn't break his grips.

Again like Kev, he mentioned I wasn't doing enough to break his grips, letting him get a dominant hold. However, what make Kev and Nick good instructors is that they don't just say "be more assertive," they add in plenty of technical pointers too. This time, they mostly came as a result of the next round of sparring, where upon being given the choice I asked to work on passing.

Secondly, basic posture when looking to pass the De La Riva. Turn the foot of your hooked leg outwards, so that you can then drive your shin into the back of their leg. This will make it very difficult for them to maintain a hook. You can then continue your De La Riva pass, normally grabbing the other leg to start.

Third, for when you're on the bottom in reverse De La Riva, grab the trouser leg rather than the ankle. If you grab the ankle, it is easier for them to kick their leg free, or drive through to collapse your knees and slide into side control. I think that also may have been happening with the purple belt, as I kept getting into quarter guard, holding him off for a moment, then getting stuck in either knee on belly or side control (the running escape seemed to come in handy for both).

Thanks again to Nick for his generosity, not only in having me down to train, but also because he spent a good thirty minutes or so sparring with me and providing lots of excellent advice. That wraps up this year's training. My next session should be at Gracie Barra Bristol at the start of the next year: I'm currently intending to head along for the Sunday sparring session on the 2nd January 2011 (I would aim for Friday, but that's New Year's Eve, so I'll most likely be deep in drunken conversation at a house party).
slideyfoot at 14:30
Share