Instead of the four corner shrimping, Kev began with a standing arm drag, taking the back off that. They grab your gi, so you grasp their hand with both of yours and yank up. Maintain a hold on their sleeve to pull them forward, then grab their tricep with your other hand. Rather than yanking then into you, step forward into them. You can then knock them slightly sideways: as they're off-balance, it is easier to move around to take their back.

That led into a slightly different application, taking the back from the guard. Again, break their grip, but this time move their arm across their body. Push the arm to their head, then secure it there by reaching one of your hands behind their head, grasping their wrist (so, like what Rener calls 'twisting arm control'). With the leg on your wrist-gripping hand side, step on their hip to shift your hips out (or straighten your legs and slide to the side: ideally you don't want to put your foot on the floor, or you lose control of their back), then still on that side, come up on your elbow.

Next you're going to swivel around to their back. Earlier, you used your leg to help you shrimp and make space. That same leg is now going to go over their back, ending on the other side of their body. Your remaining leg will be underneath them: you want to keep this where it is, but as you swivel to their back, make sure the instep of that foot is now pressed into the top of their leg. You can then bring your first foot behind that instep to establish a hook, then shift the other foot to secure the second hook.

However, sometimes it can be tough to get the hook in past your instep, especially if they are staying tight. If that happens, make sure first that your instep is hooked around the outside of their leg so you have some control. Put both your hands on the other side and push, rolling their body backwards. This will effectively move you into technical mount, putting the sole of your trapped foot on the floor by their hip. 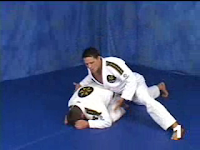 Finally, Kev demonstrated a nifty way of taking the back when attacking the turtle. You're on their side, looking to insert a hook. They are expecting you to try and get a hook on the far side. However, you're instead going to sneak it into their near side.

Reach your arm to their far hip, being careful not to go deep or they may be able to roll you. With your other hand, base out, twisting towards them so that you have one knee up, the other pointing towards them.

Raise up and insert the lower foot past their near hip or knee. Immediately hook the foot over their lower leg, like a sort of lockdown. This makes it tough for them to move. With a hand still on their far hip, shimmy in the other direction then pull that hip towards you, rolling them into your back mount.

It might feel as if you don't have much control when you are looking to insert that initial hook, but if they turn, that just gives you more room to get your foot in. You might also try shoving in your near side knee first, using that to make space for your foot and eventual hook.

I should be training again next Sunday, when Roger Gracie is coming down to do a seminar: I haven't trained with him for a few years, so it will be nice to get in another session with the best BJJ competitor of the last decade. Hopefully my leg will at least be up to drilling everything, as it would be unfortunate if I have to sit lots of that out. It will also be cool to see some people get promoted: Sahid is definitely due for purple, having won pretty much everything at blue, and I wouldn't be surprised to see Callum, Howard and Drazen going up a level too.

Speaking of Roger, he is the inaugural guest editor for Jiu Jitsu Style. I finally picked up my copy from Kev today, which is every bit as excellent as I expected. Get yours here, and if you're not in the UK and don't fancy the shipping, there should be a digital edition in the works.

I'm not the only blogger involved: Meg is in there with the cover piece on Marc Walder plus some discussion of the sport vs self defence debate; Seymour has various photos, a great interview with my old training partner Pippa Granger (who has been working hard at promoting women in BJJ for a long time now) and an entertaining piece on BJJ hand signals; Matt speaks to the legendary Yuki Nakai, along with a brilliant advert on the back for his company, Scramble (magazine adverts aren't normally worthy of a mention, but this one is spot on).

Rather handily for me, there is also a piece on knee injuries by Jon Broster. Lots of other content, in a packed eighty-six pages of BJJ goodness. Surely worth your £23 annual subscription. ;D
slideyfoot at 17:54
Share