Before I talk about this seminar, I wanted to talk about another one: be sure to check out the charity women-only BJJ seminar being held by black belt Helen Currie on 3rd April from 13:00-15:00, here. No experience necessary, and the proceeds go towards fighting breast cancer and ovarian cancer. The fee is a tiny £5, and it will be held in Oldham at Stealth BJJ. Worthy cause, and you get to learn some awesome technique: what more could you want? :)

The seminar today (which incidentally was also in support of a charity, the Action for Brazil's Children Trust over in Brazil) is without any doubt the busiest class I've seen at the McLeod Academy, the home of RGA Bucks. The club has several locations: I used to be at the one in High Wycombe.

The name 'Roger Gracie' unsurprisingly gets people excited, so there were around sixty people from the club there, possibly more. I'm guessing sixty, as everyone gave a £10 donation to the Trust, and we ended up raising £607 in total. Either way, it was great to see several women among that sixty: with a high level female purple belt at the club (Yas, who recently recorded the below excellent video with Kev), I'm hopeful that the number of women will continue to grow.

I'm still taking it easy on my knee, so spent the warm-up doing sit-ups and press-ups rather than the usual jumping jacks and squats. However, it seemed to be relatively ok for the takedowns Roger taught (though we weren't actually bringing anyone to the mat, as there wasn't space). This begins from the grip break: you grip their sleeve on the top of their hand, and also underneath, making sure that there isn't any loose material. Step back and pull up at the same time.

Keeping one hand on the sleeve, transfer the other to their collar and pull them down to break their posture. Step outside their leg as you drop to take their leg, being sure to keep your head on the inside. Securing their leg with your arms, stand back up, then also trap the leg between your arms. From there, you can do for various takedowns, like the single leg, or indeed switch to a double leg. 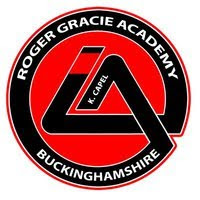 The main technical instruction centred on the half guard. Roger taught a simple but very effective posture, which can help you either recover your full guard, take the back, or sweep. You need to get up on your side, with a same side underhook. It is also essential that you don't let them cross-face you, or they'll be able to drive forward and put you flat on your back.

So, keep tight and curled in, with your hand blocking their same side arm. For extra support, you can brace that hand with your head. Alternatively, you can simply put your hand on your head, with your forearm directly in front of your face. Curl in further towards them, ideally getting right by their leg. This will make it very difficult for them to fish your head free. Most likely, they will end up trying to drive their weight forward.

As soon as you feel that weight transfer, bring your underhooking arm up, in order to knock them off-balance, past your head. You can then come up on your elbow (same arm that is on your head). Don't bring your head out from underneath them yet, as you don't want to give them a chance to control it. From there, you may find you have space to slip your knee through to get back to full guard, or swing round to take the back.

A more experienced opponent will be wise to what you're doing, and as soon as you underhook, they will look to overhook that arm, establishing what's called a 'whizzer'. That now blocks you from taking the back, but it does present other opportunities. The technique is much the same as above, but this time you can't go to the back.

If they don't drive their weight forward, you can try to move out to all fours, from which you can try to attack (e.g., if you go for their far leg and perhaps get to side control). If they do drive their weight forward, swivel underneath, reaching your basing arm behind their leg. Continue the roll, and their momentum should enable you to bring them over your body, so that you move into top half guard.

That was it for technique, moving straight into specific sparring. Again, I sat this one out, though I did get to watch some good rounds of sparring: for example, Callum's nifty open guard, which has caused me problems many times. There were about four rounds of that, split by weight, followed by free sparring. 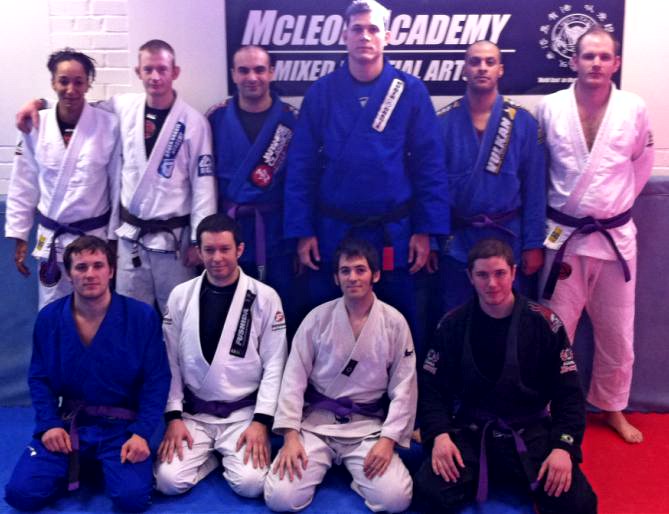 After Roger called time, everybody lined up, a tight squeeze with that many people. Kev announced that Roger was going to do some gradings (the main reason he'd popped down today), drawing out a clutch of crisp new blue belts from a box behind him. I didn't catch the name of everybody who was called up, but well done to all. Next, Kev started pulling out purple belts. Sahid was up first, a very well deserved promotion: he's been dominating the competition scene for a while now. He was followed by Callum, Howard and Matty Burn, along with Tom and Adill. Awesome to see that many new purple belts at RGA Bucks, so massive congratulations to those guys.

Roger hadn't finished yet, as Kev handed him another purple: it turns out that I was going to get one too. I have to admit it makes me a little nervous, as I still feel I have so many holes in my game. However, I trust my instructor's judgement, particularly as Kev has rolled with me many times. It is also obviously a privilege to have the belt tied around my waist by Roger Gracie, the most dominant champion in BJJ's history.

I look forward to finally getting back to sparring, which will now become an especially good test of how well I can control my ego! ;) 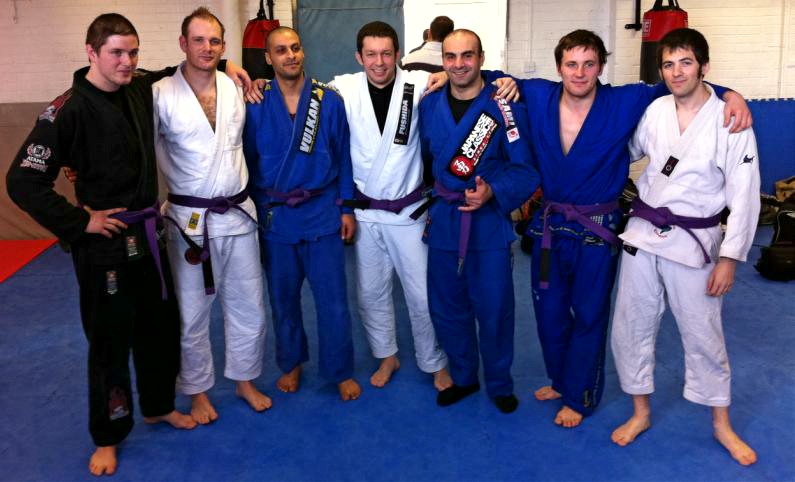