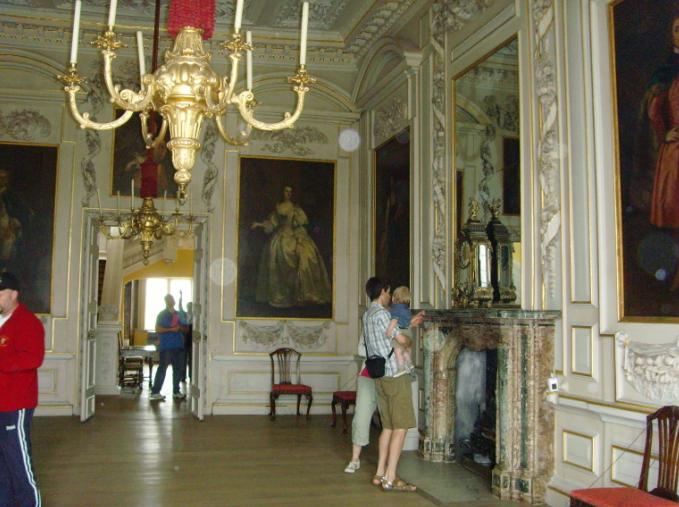 On Sunday, my friend and I drove up to the Peak District, as thanks to that wedding all over the media, there is lots of holiday over the next week or two. Before we got to our bed and breakfast in Buxton, we stopped off at Sudbury Hall. My friend is a big fan of the 1995 BBC adaptation of Pride and Prejudice (as opposed to the relatively recent terrible film version). Sudbury was used for the interiors of Darcy's home, Pemberley, so it's all suitably grand. Handily, there is a pretty good breakdown for fellow Pride & Preggers fans over at austenonly.com.

On Monday, my friend headed off for a walk, while I caught the 10:30 train from Buxton to Stockport. It was around £8 and got me into Stockport at 11:12, where I then headed to Factory BJJ in Reddish. If I'd walked, my phone tells me it would have taken around 40 minutes, so it's doable. Fortunately I didn't have to try, as the brown belt who runs the gym, Adam, generously offered to give me a lift.

I first encountered Adam through his insightful blog, Conceptual BJJ. It hasn't been updated in a while and now simply redirects to the Factory BJJ website, though naturally you can still find it on the Internet Archive. Since then, I've been chatting to him over email for the last couple of years, particularly as he's not only a BJJer, but also used to be a music journo, another favourite topic of mine. Best of all, we're both '80s fans – hooray for Hall & Oates! ;) 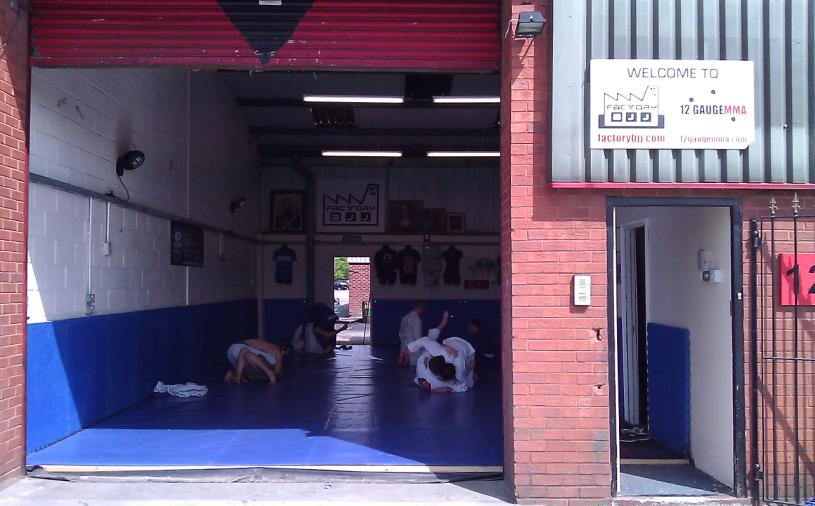 Factory BJJ is part of the Combat Base family, the team started by Dirty Dozen member Chris Haueter (who was also instrumental in the foundation of the Straight Blast Gym, with Matt Thornton). Adam recently became a full time instructor, also moving into a fully matted unit with plenty of room. That means you can train day and night at the gym, including gi BJJ, judo, no gi and MMA (Matt '12 Gauge' Thorpe runs his program out of the same location). Full details over on the Factory BJJ website.

The gym itself looked great, particularly as I was there on a decent sunny day. The front has a massive door, which is rolled up, meaning there is airflow right through the gym. I'm not sure what it's like when it's snowing, but it would be cool to find out. Rolling right from the mats into the snow sounds like a Factory BJJ advert that needs to happen later this year. ;)

I especially like the way that it really lives up to the 'Factory BJJ' name. Outside, there is a fenced off area filled with large chunks of metal. Next door, you have a mechanic: Adam tells me that normally you'll hear the sound of drilling and clanging throughout class. Finally, there's a train line outside too, so you'll frequently see beefy freight trains whiz by, which I like to think are filled with coal or something else suitably industrial. :D

Adam was a very welcoming host, as was everyone else turning up for the gi drilling session today. It's basically an open mat, split into ten minute rounds on a timer. Drilling is encouraged, though you can just roll if you want to. That works out well for me, as I wanted to practice some attacks from spider guard. I've been passively staring at people while holding a lasso grip for some time now, so I'd really like to progress to actually threatening with something.

So, before I showed up I went through my backlog of notes, pulling out all the attacks from spider guard I've learned, then picked the ones I felt most comfortable trying out. First up was a sweep I was taught by Geeza back in November last year. I wasn't absolutely certain I'd got the notes right, but the main idea seemed to be pushing them with one of your feet into their bicep, swivelling to hook their other leg with your same side arm, then knocking them over.

Adam had some suggestions for something similar. In his spider guard sweep, you start off with the lasso grip I prefer. Your other foot goes on their hip, or you can put your shin across their stomach. This acts as bait, as you want them to try and pass to that side. As they do, grab their same side trouser leg with your free hand, then bring your lassoing leg's shin and foot down to the floor.

Pressing that shin into the crook of their elbow combined with lifting their trouser leg will knock them to the floor, where you can shift into mount or side control. Even if they do pass and move to side control, you can still press into their arm with your shin and sweep them. It's a solid controlling point. 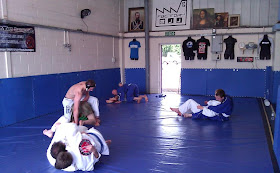 When the first ten minutes was up, Adam had a whole bunch of stuff he wanted to work from the recent de la Riva seminar. This was all based off an open guard position, which starts with you gripping their collar with your same side hand (instead of the usual cross grip). Keep your elbow flared to stop them just squashing that arm down and breaking your grip.

Still on that side, put your foot on their hip, straightening the leg to keep them back. Your free leg swings out. I can't remember if you do anything with your hand at that point, but Adam should be able to remind me if he sees this. He followed up with three attacks, based on what they do.

The first option is to go for an armbar if they grab the knee of your free leg. Use your free hand to grip behind their elbow to both break their grip and pull their arm towards you. Clamp both your knees around that arm a little behind that elbow, then go for the submission.

If they try to grab the ankle or low on the trouser leg of your free leg, bring the knee over and down to the floor to break their grip. You can then kick through, putting the leg around their head to progress into a triangle.

Finally, if they aren't grabbing anything, you can attack with an omoplata. Again, not sure if I remembered this right, but I think you kick the free leg under the armpit, bringing them down to the mat with your control over their other side. Push their arm around your free leg and move into the omoplata.

There was an interesting tip here from de la Riva. When you have them belly down, you don't reach over their back with your near arm to help keep control and flatten them out. Instead, twist your torso and reach over with your far arm. That makes it tougher for them to roll out. Once you've scooted sideways to knock them flat on the floor, you can switch your arms back and go for the omoplata as normal. 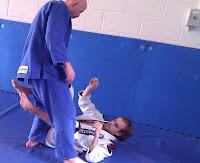 This fit in nicely with what I wanted to drill next, during the next ten minute segment with somebody else. Another attack I'd read back in my notes was an omoplata from Jude he taught back in 2008. Beginning with the lasso grip, you want to get them off balance. You'll also need your foot in their other bicep: push into that, while lifting their arm with your lasso.

Once you've got them sufficiently off-balance, pull their elbow down your lassoed leg while kicking the leg through, which will put you in the omoplata position. You can then finish as before: I tried using the de la Riva option rather than the orthodox, which seemed to function well.

However, I was having trouble getting them off balance. I also struggled to then maintain enough control to switch my grips to the elbow and tricep: they were able to just pull their arm out. I played around with it a bit after some comments from Adam (who was walking round the class offering technical tips to people), where I found that kicking my lasso foot deeper helped. That gave me a bit more control, as I could press down onto the back.

It also made their arm curve more readily, so that the elbow was temptingly poking upwards ready to grab. Rather than releasing both grips, I just released the non-lassoed sleeve, then waited until I kicked the leg fully through and pressed them to the ground before removing my lasso sleeve grip.

As before, I could then twist over to reach around their far side with my far arm. Scooting sideways collapsed them face down onto the ground, where I could switch back to the other arm for control, then finish by leaning forward as if whispering in their ear. Make sure you don't forget the various other basic parts of the omoplata, like triangling your legs then bringing them out to the side as you put your opponent on the ground.

Adam had a further suggestion, which was trying the 'foot stomp' he'd seen Michael Langhi teach at another seminar. From what I remember, you have a standard spider guard with both feet in the biceps. Release one to put your foot on the floor, pushing off with that foot as you kick your remaining bicep foot over your head. That should force them to step forward, meaning they're more vulnerable to being swept overhead.

I vaguely had in mind a sweep I'd seen at the Carlson Jr seminar back in December, though he only showed it briefly as it was a recap of something he had shown in a previous seminar. I couldn't really work that out from my notes, so moved into a method for taking the back, as I had a much better memory of that one. However, I won't go into details, as I promised the Carlson guys that I wouldn't write up any of the seminar techniques on the blog (as they asked me not to).

To finish off, I did two rounds of sparring with two different blues, Jake and Leroy. Each roll followed a relatively similar pattern, as I spent lots of time in the running escape posture. I'm still trying to spin out more often and more forcefully, but I'm also still getting passed pretty soon afterwards much of the time. I could try hooking the foot, or just blocking: like I said before, definitely need to rewatch the Saulo video to see what he does.

I attempted some of the spider guard stuff I'd been working too, mainly the sweep Adam showed me at the start. However, I don't think I'm off-balancing them enough, or providing the necessary temptation with my baiting foot. Might have also been pre-empting, as they were still standing rather than dropping down as they passed.

All techniques I'll look to continue playing with on Wednesday, when I'll be checking out Liam 'The Part-Time Grappler' Wandi's class at the BJJ Labs in Manchester. Unless it's all specific sparring from mount or something, though that's always good to work too. ;)

Sadly there was no iPod player and speakers today at Factory BJJ, as instead we were relying on a tape deck and CD player. I played lots of Hall & Oates while typing up these notes on my way back to Buxton, meaning I still got my '80s fix. ;p

On Tuesday, my gf and I drove off (well, she drove: I've yet to bother getting my licence, which I really should now I'm 30...) towards Bakewell, home of the Bakewell Tart (well, Bakewell Pudding technically, but everyone knows it as Tart). Much more interesting was the nearby medieval stately home, Haddon Hall. Impressively, this doesn't look too worse for wear, despite being built way back in the 12th century. There are several later additions to the architecture, the latest being around 1600, IIRC. I'm not quite sure why I'm sticking my bum out like that. ;)
slideyfoot at 15:00
Share