Wednesday was mostly devoted to a few hours walking from Hayfield across the moors, starting from the car park of an out-of-use train station. You next head up something called the Snake Path, through moorlands, before going on the Sett Valley Trail to get back (it's Walk 17 in the Jarrold book, although we cheated and cut it short by following a stream back instead.)

Having trained at Factory BJJ earlier in the week, my next class was to be in Manchester. Annoyingly, there were some kind of road works on the way to Stockport to visit my friend's aunt, which meant I missed the train I wanted to catch to Manchester Piccadilly. I nabbed the 17:08 from Davenport instead, and just about made it to training on time. It takes about twenty minutes walking at a brisk "shit-I'm-going-to-be-late" pace.

This was the first time I've not only visited a fellow blogger, but been taught by one too. Liam runs the beginner classes at The BJJ Labs. That's where most of the SBG Manchester crew emigrated after Karl Tanswell went on an extended trip abroad. It's part of the Fighting Fit gym under BJJ brown belt Martyn Cahill, who also teaches a number of other styles under the same roof: there are a bunch of heavy bags hanging from the ceiling and a chain link fence, which gives away the multi-disciplinary nature of the gym.

Liam, in case you don't know, writes The Part-Time Grappler blog, which is stuffed with plenty of thoughtful theory (and now a whole gallery of me, which I found amusing). That carries over into his teaching style during the beginners class, where he put all the techniques into a solid conceptual framework. As with all the best BJJ classes, the warm-up was directly related to BJJ, so instead of lots of press-ups and sit-ups, there were numerous movements from Ginastica Natural, along with the kind of drills you might recognise from Jason Scully's video. 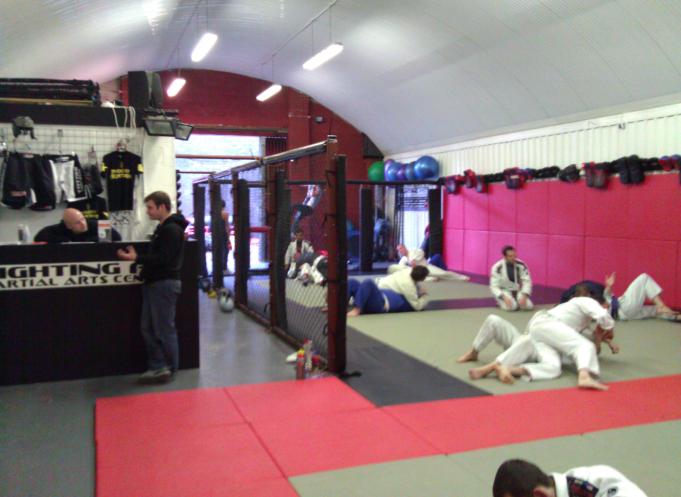 The lesson proper started with takedowns, which I often don't bother noting down, but I will this time because Liam taught a useful flowing sequence with, again, helpful concepts. For example, he spoke about forming a triangle with your feet, presuming you already have the usual collar and sleeve grip. Your partner is square on – the first two points of the triangle – while your leading foot is in the middle of theirs, slightly back – the third point of the triangle.

Once you have that triangular arrangement, you can step in and either hook your leading foot around the back of their same side leg, then drive through to bring them to the floor. Alternatively, you can put that leading foot behind their opposite heel, drive them backwards to take the weight off their foot, then scoop up the leg ready for a takedown.

Finally, you can also move around to their side (always the side on which you're not holding their collar), then drop down to both knees. You need to be close to their leg, simultaneously yanking downwards on their collar. Wrap that leg with your arm, then release your collar grip and reach for their far ankle. You can then drive forward and take them down, moving round to side control.

We then did what I dread most in BJJ, stand-up sparring. However, as it was white belts, I could mostly just stiff arm and step away. Not a good habit, especially as I'm overly passive anyway, but meh. I did try to move to the side and drop to my knees a few times (they have nice soft mats at Fighting Fit, which is a big help!), but I was admittedly glad when it was over.

Sensibly, the ground technique continued from there, discussing how to maintain side control. You start with an orthodox grip, one arm under their head and grabbing the far shoulder, while your other arm reaches over to their far side, underneath their far arm. Use your elbow to maintain some control of their far hip. Your knees are in tight, and you've also cleared their elbow (move slightly further towards their head to make sure they can't pull it back out).

If they try to shrimp out and insert their knee to recover guard, switch to scarf hold by kicking one leg straight by their head, the other knee raised for base. If they then bridge, you go back to side control. Alternatively, from scarf hold you can then reach around their trapped arm, then use your body weight to press that arm against their face.

Using that point as a fulcrum, sprawl your legs back and walk to their other side. Also keep a hold of their far arm, so they can't try any sort of escape. Once you've moved all the way round to the other side of their body, reinsert an arm under their head. This puts them in what Liam called a 'barbed wire' position, with their arms criss-crossed over their upper body and/or face. I've also seen it called the 'bow-tie', I think. There are various subs you can do from here, like turning to face the other way and applying a waki-gatame armbar.

Chatting to Liam afterwards, he spoke about how the beginners syllabus was built up. I had assumed it would have some kind of link back to the SBG teaching methodology (which is certainly there, especially the integral progressive resistance approach), but apparently The BJJ Labs has used the basic framework provided by Gracie Barra Fundamentals. Modifications occured for various reasons, such as the manner in which a takedown in the DVDs might end in side control, but then the next set of techniques would continue in mount. That doesn't make much sense, so instead Liam and the gang made the more logical progression of - for example - a takedown into side control, followed by attacks from side control.

Class finished up with a bit of light sparring. I was with my training partner, JP, a friendly tall Canadian (all the Canadians I've ever met seem to be tall). He had been asking lots of sensible questions throughout drilling, something I very much approve of, given that's exactly what I've been trying to do ever since I started. He took onboard everything that had been chatted about earlier, making sure to try and kill the near arm, switching back and forth from scarf hold and being certain to keep his weight pressed into me.

Sparring was fairly brief, so I don't think I had a round on top: the advanced class was waiting to go, although I wasn't able to join in, as I needed to head back to Davenport to join my gf. On my way back to the station I could take in slightly more of Manchester than the hurried previous journey, but still not a lot. Before today, I've only been to Manchester Airport, back when I used to live in Yarm. It would be good to check out the city properly some time: after all, one of my all-time favourite bands hails from here, The Smiths. :)

Our last walk, my favourite, was on Thursday (again from the Jarrold book: Walk 2). This time we were in the Castleton area, which again has amazing views, but it also has the bizarrely interesting ruins of the old A625. Apparently, back in the day this was a main route between Manchester and Sheffield, but because of the unstable ground, bits kept falling off. A particularly major landslide in 1977 caused serious damage: the road was finally closed to through traffic in 1979. 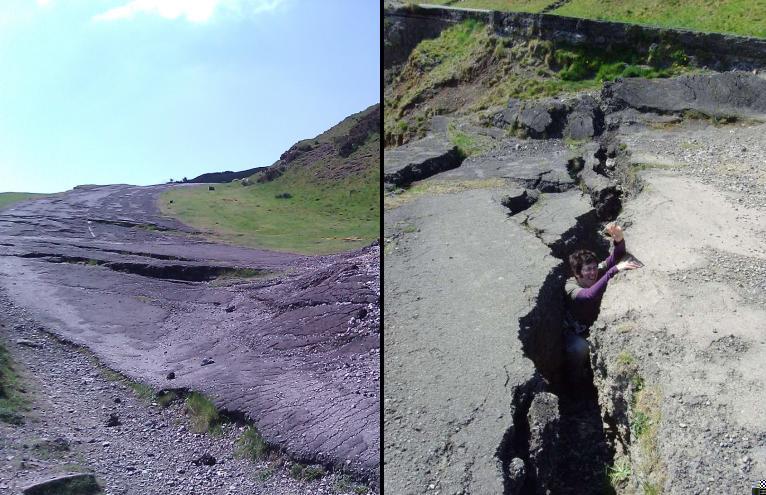 It felt a lot like walking through one of those apocalyptic landscapes from a dystopian sci fi film, like Planet of the Apes or Mad Max. The road was smashed up, yet the signs of civilisation could still be seen: a drain cover, a cat's eye, the lines up the middle. For some reason, I was fascinated. Not far from there was a historic site (dating to the 13th century, allegedly) with the awesome name of Odin Mine, though I wasn't able to walk too far inside before I started sinking into clay. Reminds me I'm looking forward to watching Thor. ;D
slideyfoot at 20:00
Share