Interview: Mauricio Gomes on the Development of Competition

Back in December, Rolls Gracie black belt Mauricio Motta Gomes was down at Gracie Barra Bristol to teach a master class, just before the submission only competition. I was able to grab a few minutes to speak with him: I'll be splitting the results into four parts over the next month or so, discussing his son Roger Gracie, teaching around the world and belt tests, among other topics. First up, Mauricio shares some of his thoughts on competition.

slideyfoot.com: If you had to pick one thing that marked Rolls Gracie as special, what would it be?

Mauricio Gomes: He was quick in his submissions. He was the type of the guy that would teach us a position, it was new for us. To show how that thing was effective, he would tell us "ok, now I am going to show how good this is, and I'm going to roll with all of you, and I'm going to get you all in the same thing." So, we knew what he was going to do, but we couldn't avoid it. He would still get us all.

Plus, he would always try to add in whatever another martial art could bring. Always. It was an amazing time, believe me. That was the end of my adolescent years, and I made the most of it! [laughs]

slideyfoot.com: Do you think that BJJ has changed for the better since Rolls' time, or is there anything that perhaps has been lost and you'd like to bring back?

Mauricio Gomes: I think what has been lost in jiu jitsu over the years...I think that much is different, we used to train a lot for competitions in a different way. I don't know, sometimes I look back and I try to compare our competitions to the competitions of today. What I see is that there are a lot of people training situations where they can hold on for dear life, or holding a fight up to a situation where you'll try to score a point, a half point, this or that, just before the finish of the fight, to become the winner.

I think that everybody should train to finish the fight. That should be the main goal of everybody. I would never encourage my students to just hold on to something, four minutes, five minutes, six minutes, whatever. "Then you can do this, and obtain the victory." That's a mistake. I don't know what happened, I don't know if jiu jitsu grew too much and there are too many competitors. Now you've got advantages and a lot of people started to stall, or don't want to finish the fight. They want to stay there forever. Obviously they put in time limits, advantages, they got this, they got that.

At the end of the day, I think that the focus should always be to finish the fight, how to get there as quick as possible. No stalling, no this, no that. Unfortunately, the competitors of today got to a point where the higher level fighters, there is no difference between them and an Olympic athlete. They train like they're going to the Olympics. They're really up for it. If you're going for these competitions and not prepared physically, you will lose. Even if you know a lot, today, that's not enough. It's the knowledge, but it's also your body and mind, are you physically fit.

You go to a competition these days, and you have like eight or nine fights, if you're looking at your weight and the absolute – I'm talking about black belts, right? It is usually like that, eight or nine fights over the weekend. You've got to be fit. They are ten minute fights, so if you don't finish your opponent right away, that goes on for ten minutes, then another ten, then another ten. So if you're not really fit, then over those two days you'll gas out.

slideyfoot.com: Was that less the case back when you were competing?

Mauricio Gomes: Yeah. We trained a lot, absolutely, trained like warriors, and we did a lot of physical conditioning. Running, walking on the soft sand on the beach, swimming. But nowadays it is just another level, it isn't like it was. It's the evolution, you know? That's normal, nothing stays the way it used to be. In this case, it changed for the best. The competitions are very competitive, the fighters are athletes, proper athletes. If you want to be a very good competitor, you have to have a good sponsorship. You require money.

You know how long a fighter prepares themselves for one competition? Obviously they never start from scratch, they maintain a certain level. Two to three months, at least, before a competition they start increasing their sparring, their fitness level and all that, to go all the way up to the level they want to be at to go for that competition. They have to sacrifice a lot in order to do that. They can't have a proper job, because they're training all day, so they need money to survive all this. 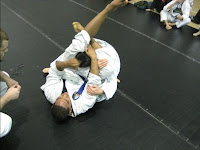 It's money for food, to pay for other people to train you. In the old days, you just think you do a run in the morning, something else in the afternoon, but today, the levels are completely different. You have a guy that is actually your instructor, for conditioning, for fitness, for the muscular part, a nutritionist, you know? All of this comes together to make you the proper athlete, fit and ready for the event. In the end, to reach this level requires a lot.

Next week, the discussion moves on to Mauricio's thoughts on his son Roger Gracie's success in competition.