[To ignore my rambling and skip to the training, click here] 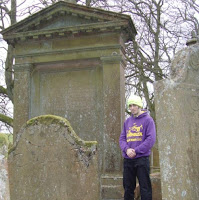 The art we practice is called Brazilian Jiu Jitsu. Its royal dynasty is unquestionably the Gracie family: though other names are also important, like Omori, Franca, Fadda and of course Maeda, not to mention the Machados (cousins to the Gracies), it is the progeny of Gastao Gracie Sr who have had the most visible impact on the sport. However, Gastao's father was not a Brazilian. He was a Scot, George Gracie, who lived about 20 miles north of Dumfries.

In 1826, George left the parish of Morton in Nithsdale (I'm still not sure if the specific village was Carronhill or Carronbridge) for Rio, returning in 1859 to the land of his birth in order to erect a memorial to his late father, James. This week I'm on holiday in the same area of Scotland: given my keen interest in jiu jitsu history, I knew I had to go see that tombstone. It's located in a small graveyard by a ruined church, Greenhead Cemetery. It was a bit of pain to find the exact location, so if you're planning to take a look too, save yourself some research by clicking here.

If you don't have a car (I was very fortunate that my friend was willing to drive), then from Dumfries, you can take the 436 bus to Thornhill, then walk for about thirty minutes up Manse Road until you reach the graveyard. The site is on Google Streetview, where you can see the large gravestone George established. There are also several pictures from Reyson Gracie's 2009 visit (written up here), which is what initially inspired my own mini-pilgrimage to the site [Update 2021: Looks like the site is down, sadly]. Finally, you can take a look here and here.

Looking at photos online is all well and good, but I wanted to be there in person, as well as get in some close-up pictures. I knew from what I'd read on the net that there was an inscription from George, though it was hard to make out. According to that Reyson article, it says "Erected by their son, George Gracie of Rio de Janeiro, 1859", which looks about right. At the top, it appears four of George's siblings died very young (I'm guessing that wouldn't have been unusual in the early 19th century, presumably from disease), but his father lived to 85, so that long lifespan may run in the family. Hopefully one day somebody will raise up the cash to restore the gravestone before the words are completely obscured.

Our base for this week in Scotland was Kirkcudbright. It's known as an artist's town, mainly because of its connection with the Glasgow Boys: I'll be talking more about them in tomorrow's post. Despite the spelling, the town's name is said "kir-COO-bree" (I didn't realise the emphasis was on the second syllable rather than the first until later), but then as I have a weird name myself – it's written 'Can' but pronounced 'Jun' – I can't really complain. ;) 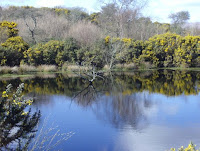 Kirkcudbright is a good location for heading off on walks around the Galloway area, along with a few more unusual attractions, like the excellent Cream O'Galloway visitor centre (quite cheap too, at £6.50 for entry and a tour). That used to be just a farm, but since they diversified into making ice cream back in the '90s, it's grown into a farm tour, an ice cream making experience, an adventure playground and several acres of walks. They haven't stopped innovating, as the farm is about to embark on an interesting experiment with their dairy cows: the calves are going to be kept with their mothers for nine months, rather than separated.

Aside from a pleasant holiday, I'm mainly in Scotland for Jiu Jitsu Style magazine, to get material for the 'JJS on the Road' column. Scott McVeigh is one of the few black belts in Scotland, under the man many people still credit for their entrance into BJJ: Royce Gracie. I had the pleasure of interviewing Scott about the origins of Scottish BJJ, his time with the Gracie family and plans for the future (as ever, our chat should be appearing in JJS later this year), before putting on my gi to join in with training.

Like you'd expect from a Royce Gracie school, there was some self defence to begin with, throwing them after you're grabbed from behind. The main groundwork techniques were built around the scissor sweep, or rather, what happens if they block your scissor sweep. For example, there may be an arm in the way, meaning you can't bring your leg across their stomach properly.

Instead, that knee is going to go over their blocking arm: you can then push with your leg to break their hold on your gi, simultaneously pulling with your own grips on their sleeve and collar. As soon as you bypass their arm, circle the same leg up around their neck, then move into the triangle.

Another alternative is for when you're trying the sweep, but decide to switch to a sort of reverse scissor sweep. Your shin is across their stomach for the scissor sweep, with a grip on the collar as well as their same side sleeve. Rather than pulling them onto you and chopping out their leg, switch your sleeve grip to their opposite arm (so, that will be the arm next to the foot of the leg you have across their stomach) and yank it across their body.

Next, release their collar and instead reach around to their opposite armpit, bringing them in tight. As when you're trying to take the back, you need to press your chest into the back of the arm you pulled across their body, so they can't pull it back out. On the same side as the arm you've trapped, put your shoulder back on the mat, which should enable you to fling them over with your braced leg and move into side control.

If they sprawl, you can take their back. Though their sprawl will make it hard to get the above sweep, you can now just bring your free foot between their legs and swivel around to their back. Scott advised that I should be pressing with my heels rather than trying to curl my instep and toes for grip, as the latter could get hurt should they try and roll out.

During sparring, I stayed defensive as usual. I'm already passive when training, so when visiting other clubs, my passivity gets almost catatonic (unless my training partner is inexperienced or much smaller, in which case I try and flow through a few positions). Interestingly, one of my rolling partners went for a footlock, which doesn't happen all that often. I did the usual defence of sitting up and grabbing a collar, trying to sit through to mount. It's good to have that reminder, given that even under IBJJF rules, white belts can throw a straight ankle lock.

I really liked the atmosphere at Royce Gracie Scotland, which felt informal and friendly. That's a reflection of Scott's character, who in many ways reminds me of one of my own instructors, Kev at RGA Bucks. Both of them give a strong impression that their main concern is how to improve their students' BJJ, as opposed to how much money they can make.

Thanks again to Scott for welcoming me into his class: I wish him the best of luck with his plans for the future, and hopefully either I or another JJS contributor will be up to report on the upcoming Royce seminar in April. :)
slideyfoot at 21:00
Share