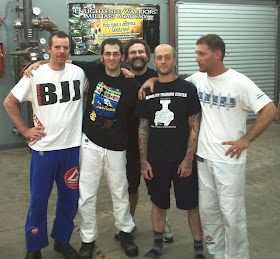 The Bullshido website has been very important to my BJJ. It was members of that site who originally encouraged me into the sport, giving me the push I needed to get started. It was also a thread on that site which set the tone for my future training. I would strongly recommend everybody who wants to train BJJ read it, here. The training logs section has been another touchstone, one of the best of which is written by the awesome John Palmer, posting as jnp.

I have been reading jnp's log for years, as well as his numerous other mature and helpful posts all over the Bullshido website. So when I decided to go to Texas (full write-up here), 'meet jnp' was high on my list of priorities. Without meaning to be too gushing, it was even better than I could have hoped. I already expected him to have great BJJ, but he is awesome company off the mats too. Genuine, generous and intelligent, John has led a fascinating life which he is very good at sharing in a series of engaging anecdotes. It was a pleasure to spend a day talking and training with him, as well as meeting his lovely family.

In terms of BJJ, I essentially got a several hour long private lesson with a high level brown belt (although as anyone who has rolled with John over the last few years can tell you, a black belt would suit him rather well ;D). John likes to do an introductory talk that he gives to students. It is something he has mentioned in various threads, but it was extremely cool to hear him explain it in person. He discussed alignment, relating to skeletal structure and where the strength of the joint resides, along with the importance of creating angles (using the analogy of striking). Virtually every attack from guard is more effective once you create an angle, so any time you're in guard you should always be trying to cut the angle.

Once we arrived and started rolling, John went into much more detail, as well as demonstrating both compliantly and then during the course of sparring. His theory of control points was interesting, which he splits into primary (head, shoulders and hips), secondary (inside of elbows and knees) and tertiary (wrists and ankles). He also emphasised the 'flow with the go' mindset popularised by Rickson, so if you're meeting resistance in one direction, such as when you're passing, go with that force and move around to the other side.

Update Dec 2012: John put up this link over on Facebook, where he goes into those conceptual ideas in depth.

Update Oct 2020: It turns out that this lesson from John was incredibly important to my BJJ development. Control point theory has since become central to my game, especially to the way I teach. For a quick summary, I teach my interpretation here

Along with principles, John showed me some specific techniques too. I have struggled with the Braulio escape from side control for some time. John uses a modification to that technique which I'm looking forward to trying out. When Braulio does it, he pushes into the armpit and sits up. In John's variation, he stays on the floor. He waits for them to bring their arm past his head while in side control, then immediately grabs that arm by the wrist and elbow. Next John shoves that arm right to his feet, curling his body.

Still staying on the floor, turn to your belly, so that your legs end up stretched out behind you, continuing to firmly grasp their arm. That should cause them to flip to their back, meaning you can come on top and establish your own side control. Drilling that, I need to remember to push the arm far enough: I kept stopping short, which makes it much harder to put them on their back.

After catching me with a leglock, John had some further helpful tips on defending the kneebar. Your initial reaction should be to grab their head, wrapping it with both arms and dragging it into your body. If you can't get their head, grab their near leg and pull that towards you, to prevent them closing their legs. Similarly you can try using your free leg to hook under their leg and lift, again to stop them clamping the submission in place. Triangling your legs can help too.

I'm continuing to play with the running escape, which resulted in some more good advice from John. He noted that whenever somebody tries to swing their legs through as in the Saulo finish I taught recently, he blocks their hip with his head, which immediately sets up the pass. Aim to get your elbow under your knee if possible and keep moving so they can't toe hold. Definitely don't try grabbing your own leg as a defence, as that will mean you arm is straight: they can then collapse your knee into your arm, trapping both limbs.

I have rolled with a number of higher belts, but there are very few who are able to measure their pace as well as John. Many times when I've sparred a black belt, I find myself either staring at them as they wait for me to move, or just getting smashed. John found the perfect balance between the two, letting me move, anticipating my actions, but applying just the right amount of pressure to keep me moving. If he ever opens a club or regularly teaches somewhere, I would very highly recommend anybody able to get to Austin trains with him. Excellent teacher. 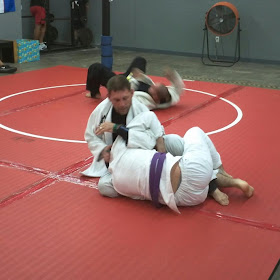 Hence why sparring was a great deal more useful than normal. I had the luxury of a talented instructor to roll with who was also willing to give me detailed and specific advice after we finished rolling. Although I am being wriggly with my legs when escaping, John recommended that I engage my hands as well, such as pushing into the head. Still on the topic of escapes, it is important to work out several techniques that flow together, particularly as I depend way too much on the running escape. So. I need to find another side control escape that follows on from the running escape. The failure of one technique should feed into the potential success of the next.

John noted that I was tending to pause briefly when I was put in a bad position. Instead, I should be working towards my escape right in that moment of reversal, rather than allowing that moment of delay. Partly that comes down to mat time, but it gives me something concrete to think about, especially when rolling with people better than me who keep putting me in those bad positions.

Due to the injury, I haven't been sparring much on this trip, but I did get in a roll with another member of the Bullshido website too, which was cool (he posts on there as daddykata), as well as chatting to various others, like blackmonk and Naszir (who took the pictures). I haven't been to a throwdown (the name Bullshido uses for these training meet-ups) in a couple of years. Today reminded me why I went in the past, as they're a lot of fun. :)