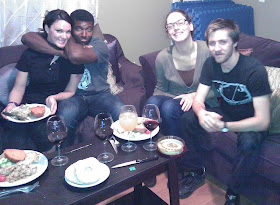 Jeff Rockwell is a name that should be familiar to you if you spend much time on the numerous BJJ internet message boards. I think I first heard about him in connection to Aesopian, as one of a group of instructors sharing and discussing technique with each other online. I did not realise he lived in Austin until I saw Marshal Carper's post about training with Rockwell. The approach described there sounded right up my street, so I was keen to check out Jeff's school during my Texas trip (full write-up here). As he is an awesome guy, he immediately offered me a lift to the club when I contacted him over on the Grapplers Guide.

Training at Raptor Jiu Jitsu resulted in yet another example of the incredible sense of community that BJJ can build. I arrived into Austin on Tuesday, meeting up with the fabulous blogger Georgette, then trained at Sean Cooper's gym with her husband Mitch a few hours later. While there I met a gentleman called Mikal, who later invited me to his home for dinner, provided by the wonderful cooking of his fiancee Marlena (she was also willing to drive me round Austin, because she's super cool).

Also present were Jesse and Susie, who I'd first met on Saturday training at Jeff Rockwell's school (they work for the Enlightened Warriors, a charity that reminded me of Future Champions in the UK). Five people who had never met before that week, sat in a room getting to know each other, sharing food and drink, brought together by jiu jitsu. BJJ is awesome, for so much more than just the physical training side of things.
_______________________________________

After the warm-up, Jeff moved into some useful drills for recovering guard out of turtle. They are on one side of you, pressing their knee in looking to establish their hooks. Grab the far leg with your inside/near arm. Your near knee then goes up onto their hip. Base out on your free arm, using that to slide your other leg in and go to guard.

The next one is from a similar position, except they have a grip over your back. Protect your neck with your far arm, reaching to your near side collar. With your near arm, grab inside their near knee, bringing your elbow to the outside of their hip. Base out with your free arm, then walk up on your toes. Come up until you can support yourself on your head and shoulder, meaning you can roll through like Dónal’s comparable drill.

They will probably have their head clamped by your hip (if they are using the blocking method John talked about), so you want to push that with your free hand (which was the basing hand originally). With the other hand, you should still be holding their knee: as you roll through to recover guard, this arm straightens out, but continues to push into their knee.

When you recover your guard, they are probably going to move straight into the double-underhook pass. Try to avoid them getting their hands locked, as that will make it tough to defend. The natural impulse is for them to reach their hand across to grab your collar and start stacking (when drilling, it is helpful if your partner indicates which hand by opening it wide and moving it slowly towards the collar). Once you see that hand moving, grab their wrist and elbow.

It is possible you may need to hook underneath the elbow if they are tight and pry it free. Either way, bring their arm across your thighs and shove their wrist into your hip. Keep pushing on their elbow, then move your wrist hand to base behind you as you sit up. Continuing to brace against their elbow, you should now be able to make enough space that you can recover guard.

Next up was a favourite technique of mine, the running escape, which Jeff does a bit differently. Unlike when I have taught it, Jeff uses this against the orthodox side control grips. Block their cross face with one hand, the other gripping around their shoulder blade (that should mean you can wedge your forearm under their neck). Bridge and turn away from them slightly, but only enough that your shoulder can get onto their chest. Make certain you defend your neck in order to protect against chokes.

That then progresses to something similar to the Braulio escape. Do a big step with your bottom leg, spin over, your other arm sliding underneath your body and to your side to block any potential hook they might look to insert to take the back. As you go to your knees, that arm comes up like in Braulio's version. However, unlike Braulio, you are looking to use it to grab around their back and then recover guard, rather than necessarily as a prevention to them taking your back (though it can work in that situation too).

Sparring with Jeff I was working a lot of guard retention again, avoiding the holes he was leaving for me to fall into. Similarly with the other people I sparred with it was mostly about maintaining my guard, working the spider guard to an extent. I’m still not quite sure what is best for my injured leg, but I at least didn’t seem to aggravate it during sparring at that school. Like John, Jeff is another senior belt who is good at adjusting his rolling to the level of his partner. I've been very fortunate to train with several black belts on this trip.

I later sparred with a purple belt called Jessica, who has excellent guard retention. Rolling with Jesse was cool too. Jeff has a great bunch of students and an accessible, detailed teaching style. It was an absolute pleasure training with Jeff, as well as chatting to him about his background on the drive over. I can definitely recommend Raptor BJJ to anyone in the area: he also teaches a class at the University of Texas. So, go check it out! :D
slideyfoot at 12:00
Share