Last Sunday was the 4th Gracie Barra Bristol No Time Limit Submission Only Competition. I was mainly reffing for the third iteration, but this time Geeza had a new job for me: admin. I suspect that was due to the GrappleThon, to which the organisation of the sub only felt quite similar (especially chivvying people along), but with lots of paper in front of me rather than beautiful clean laptops. Next time, I may seriously consider bringing my laptop and having the brackets laid out in spreadsheets: that would be a lot easier to track. But meh, we'll see. Either way, great day, lots of good fights and reconnecting with friends from around the country (like Paula, Christian, Alison, Alex and others), along with making new friends, like Tanya. The full results are up on Facebook, here.

Operation Tattered Belt has been continuing over on Megan's and Jiu Jiu's blogs, where they've moved to knee on belly. That also reminds me, Julia put up an article by me about how I currently teach, here, which is apropos to this post, given I'm also writing about teaching. :)

I'm still teaching escaping the back at the moment. I exhausted the majority of back escapes from Saulo's book last week, so today I'm shifting to another basic technique, the bridging back escape. Saulo isn't a fan, listing the bridge escape under 'common misconceptions' in the back survival section of Jiu Jitsu University, but it is nevertheless standard at most schools I've visited. The motion is roughly similar to the bridge and shrimp under side control or mount to recover guard, but the body arrangement is quite different. Rather than trying to bridge and shrimp to crawl away from a weight on top that has pinned you to the mat, you're bridging to pin them and then crawl over the top of a weight behind you.

The method I'm familiar with was taught to me by Kev Capel (which incidentally is the same way Feitosa teaches it on Gracie Barra Fundamentals). Cross your hands under your jaw, pressing the back of each hand against your face, elbows in tight. This should both block attempts to press a forearm into your neck, while still enabling you to use your hands to intercept theirs. Interestingly, Brandon Mullins grabs their choking arm with both of his, reaching back to grab behind their elbow with one hand and their wrist with the other. He then pulls it across to create some space. Personally, I'd be worried about my neck with that method, but it's an option to try.

Bridge up, trying to get your head to the mat, with the intention of getting your shoulders to the mat. Keep moving to the side until you've created a bit of pressure on their hook. Brandon Mullins talks about a continuous motion of incremental shifts to the side and twists of the hips, until you can pop their hook off. Feitosa pushes it off with his same side hand, whereas Mullins prefers to use hip pressure, just like Xande and Saulo in the escape I taught last week.

Whichever method you use, do a big step over their leg (Mullins does a 'high step, bringing his knee up high towards his head, then putting the foot over) as soon as you pop it off, then move your hips over onto the floor. Grab their leg (the difficult part here is knowing when to move your hand to the leg, as you don't want to give them access to your neck), then drive with your legs to get your weight onto their chest.

You need to make sure that you keep your weight on their chest the whole time, gluing their upper body to the ground. Aim to get your head to their opposite shoulder. This part is much the same as last week's escape. Again like Xande, Mullins notes that they will mostly likely try to come on top. You still have their leg, so you can always just recover guard (though if you can get on top yourself, that's preferable).

To get on top, gradually walk around with your feet, maintaining that pressure on their chest. With your other hand (this will be the same hand that released their hooking foot earlier), reach over and grab their opposite leg. This is to stop them turning into you. It should now be a simple matter to twist into side control. You can also try hooking around their head: the picture above is from a slightly different scenario, as Xande is escaping the turtle, but similar principles apply.

I finished off with a simple escape from the body triangle, which I first learned from Nick Brooks. Once they lock the body triangle on you, your goal is to roll to the side of the dangling leg. Normally they will also be hooking their foot behind your knee (as this helps their control, because they can then lift and turn you). 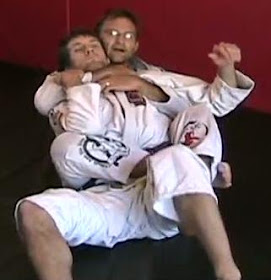 If you can trap that leg on the floor, an easy footlock is now possible. Bring your nearest leg over the top of their dangling foot. Triangle your legs to prevent them moving their legs, then bridge, so that your hip shoves into the point at which their foot is locked behind their knee. That should cause sufficient pressure on their ankle and foot to make them tap. You can also try Brooks' version, where you instead use the heel of your foot to block their dangling leg in place, then bridge.

Two less effective options which may still yield results are to hook around their leg as they turn you to the other side. From here, you can again try and bridge into their locked foot and knee, but they have a much greater range of motion, so it will be tough to generate enough pressure. Similar, if their foot is dangling between your legs, you can try crossing your legs over that and bridging.

Teaching Notes: I've been tending to say get your head to the mat, then try and get your shoulders to the mat. However, if you're trying to maximise your weight into their chest, I'm not sure if it is in fact better to keep your shoulders on them, rather than shifting them off then driving them back on. I guess it depends on what escape you're using, or if you're trying to combine escapes.

I reviewed the technique at the end again, but I would like to start reviewing the previous lessons technique in the warm-up at the start too. There weren't enough people there from last week to make that viable, but hopefully I'll be able to institute it at some point.
slideyfoot at 20:30
Share