Short Review: Datsusara's follow up to the HCG-02 has a new cut, better fitting than the old judo-style baggy jacket (though it's still fairly baggy on my frame). As before, the 100% hemp material feels soft and comfortable, while also staying cool due to its porous nature. The stitching issues have also been resolved, aside from one small defect on the belt loop which is probably specific to the particular gi I received. The main drawback is that the HCG-03 has increased in price, meaning that cost is becoming an even more significant obstacle. Available to buy here for $199.95, in either unbleached 'natural' white or midnight blue.

Full Review: When I reviewed the HCG-02 for Meerkatsu last year, there were two major flaws that needed to be resolved with the next edition: poor stitching and an overly baggy cut. I was therefore keeping a close eye on those two potential problems after receiving the HCG-03 while I was in Texas. Georgette kindly let me have the gi sent to her home, in addition to all her awesome hospitality while I was there in November. Incidentally, she also has an HCG-03 to review: I'll update this with a link when it's up. 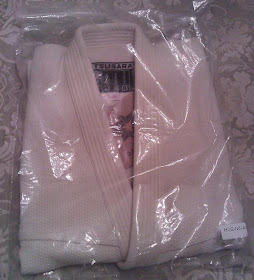 The new Datsusara hemp gi comes in either white or midnight blue (no black in this batch). As before, the 'white' gi isn't truly white, but unbleached, resulting in a beige hue. The price has increased by $60: hopefully it won't rise any higher, but then Odell did say previously that the price was already being kept artificially low while they ironed out any errors. That cost barrier could cause problems, as with the even more unique (and even more expensive) Gimono.

Chris Odell's explanation is reasonable, but most people will still baulk at the price. If the claim that hemp is so much stronger and more durable than cotton is true, then as with the Gimono, the expense can be justified to an extent:

On the pricing once again guys hemp is so much better than cotton, but you kind of have to use it to really understand. All I can tell you for sure is we pay 4X what other guys pay for just about any gi on the market so as you can see our markup is actually very low considering. 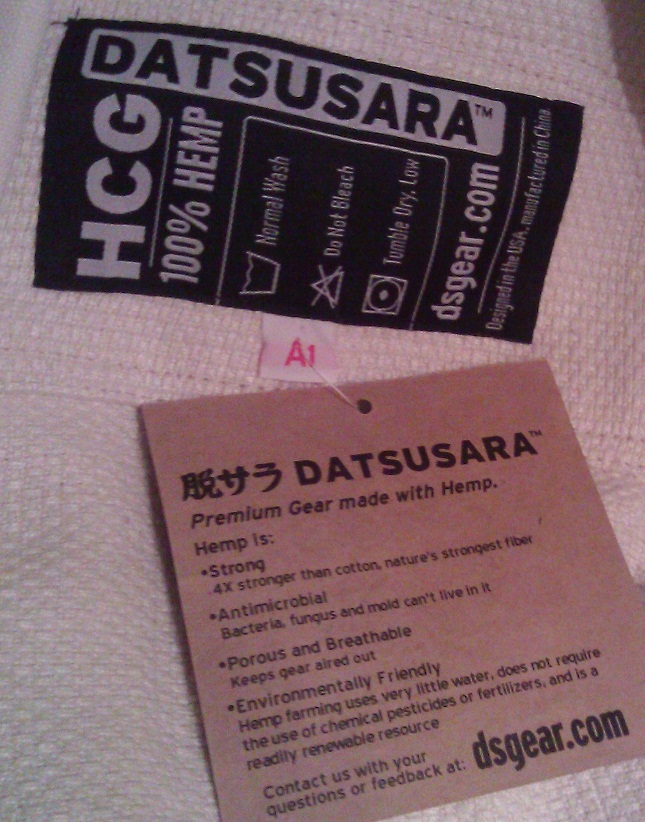 There have been multiple improvements to this updated edition since the HCG-02, while retaining the previous benefits. As I discussed at length in the HCG-02 review, there are many claims regarding hemp. The relevant advantages touted for a hemp gi are:

- Four times stronger than cotton
- Anti-microbial, so allegedly bacteria, mold and fungi can't live in the gi
- Green: readily renewable and the cultivation process uses limited water
- Porous: breathes well and dries faster
- Wears in rather than wears out

I can't vouch for it being anti-microbial without access to a laboratory and a science degree, but the HCG-03 still has the wonderful softness of the HCG-02 (and thanks to Georgette's washing protocol smells fantastic, but that only applies if you've washed your clothes in Georgette's house ;D). It also dries relatively fast, taking about a day, though that is still much longer than either my Gimono or my Gorilla ripstop, both of which dry in a few hours.

Importantly, the HCG-02 issues with stitching have been addressed in the HCG-03. I only noticed a couple of slightly loose threads around the sleeve cuffs, but that was trivial, especially compared to the large gaps on the HCG-02. Having said that, I was surprised that one of the belt loops broke after the second wash. I would guess that is simply a defect in the particular trousers I had, rather than something endemic across all the HCG-03 gis. It isn't hard to fix, but annoying nonetheless.

An issue that has carried over from the HCG-02 is the amount of lint. I had a pair of black trousers in the same bag as my Datsusara hemp gi, as the temperature in Houston tends to bounce from hot to cold. When I took the black trousers out, they looked like they had been rolled in flour due to all the shedding from my HCG-03. Similarly, in the shower after training it felt like I was using one of those exfoliating shower gels due to all the lint from inside the gi. The HCG-02 stopped shedding after a few washes, so I would assume the same is true with the HCG-03 (other reviews I've read mentioned it stopped after four or five washes). 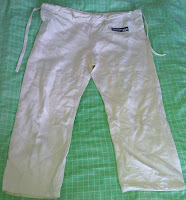 The jacket is 580gsm, while the trousers are 370gsm: that hasn't changed since the HCG-02, which itself was only slightly lighter than the 600gsm CG-01 hemp/cotton blend. I am used to much thinner jackets, especially as I was testing my Gimono alongside the Datsusara in Texas, but the breathability of the hemp means that it doesn't feel as heavy as the gsm might indicate. The weave isn't typical either, as it is a 'basket weave' rather than the more common pearl, single and double weaves. It will get creased, unlike the Gimono, but not to the extent of something like the Gorilla. That's a very minor point though, which I only noticed because the Gimono has such a ridiculously crease-proof drape.

Behind your neck, the inner label of the HCG-03 has increased considerably in size and was slightly itchy at first, though it seems to have lessened with repeated washes. Unlike the HCG-02, the trousers do not come with the option of both a rope and drawstring (or at least mine didn't). You're stuck with the flat drawstring, which is fine with me as that's what I prefer anyway, but I'm aware that many BJJers favour a rope. The thread in the gi is made of nylon, as Odell stated here.

I loved the plain styling of the HCG-02, which has been kept for the HCG-03. The embroidery of the hemp seed 'mon' logo has been exchanged for appliqué. This looks much sharper than the old embroidery, with a white border trim. If you want a completely plain gi, I would expect appliqué to be harder to remove than a patch (unlike patches and embroidery, I haven't tried removing appliqué), but then there are only two of them.

On the back, the Datusara logo has been moved up higher, between the shoulder blades. That shows Datsusara once again listening to criticism, as a number of people disliked the way the HCG-02 back design was in the same spot where you would normally put a team patch. As with the sleeve, this is also appliqué rather than the old embroidery, meaning there isn't that weird effect from the HCG-02 of a ghostly white version on the inside of the gi. Then again, it would be covered up by the larger inner label anyway with the new HCG-03 design. 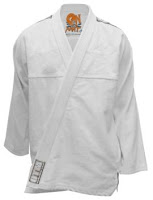 A more significant change is the cut. The HCG-02 felt baggy, like a judogi. The HCG-03 is tapered to the body for a far slimmer fit than the old version, in my case further helped by the fact I went with an A1 this time rather than an A2 (though it is still baggy compared to my best-fitting gis, which are probably the Black Eagle Predator and Basico). That improvement in terms of fit is due to the help from Scotty Nelson at OnTheMat, who was a groundbreaking figure in both US BJJ and US-based gi design (he mentions his involvement with Datsusara briefly during his Open Mat Radio interview from a few months ago). The cut of the HCG-03 was taken directly from the OTM 420, though Odell noted in his email to me that the HCG-04 would be changing its cut slightly. Nelson also helped in locating a different manufacturer for the HCG-03. I can't think of any other pair of gi companies who have been willing to work that closely, so its another refreshing development from Datsusara (and indeed OnTheMat). 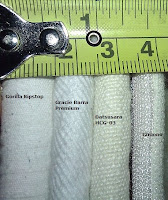 There was a great deal of shrinkage with Datsuara's previous hemp gi, though as Seymour washed the HCG-02 before I got to it, I didn't see the process. However, he did let me know the stats, which meant that effectively the A2 shrunk down almost to an A1. This time, I got an A1 in the HCG-03 and shrinkage has been far less. I did two washes at Georgette's house at 25 degrees celsius then hung it up on a door, followed by a third wash at 30 degrees celsius in Bristol. The cuff-to-cuff wingspan started at 159cm, dropping to 155cm, then stabilising at 154cm. Shoulder to hem was originally 80cm, then shrunk to 77cm, where it stayed. Finally, the trousers began at 96.7cm, then steadily shrunk by increments for the first two washes: after the first wash it was 95.5cm, then 94cm. It remained at 94cm with the third wash. 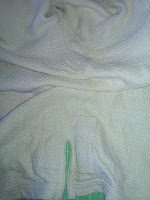 The reinforcements look sufficiently beefy, also made of hemp. There is a large pearl-shaped section on the armpit and a square on the side vent (rather than the triangle used by some other gi companies). The trousers have a long section of additional fabric starting above the knee and stretching all the way to the bottom of the trouser cuff. That prevents the problem of the reinforced section being too low or too high when you kneel on the mat.

The Datsusara HCG-03 is apparently IBJJF legal, as people have mentioned they have won IBJJF competitions while wearing a Datsusara HCG-03. According to the Datsusara website, that is true for both the unbleached white and the midnight blue. Like last time, Odell has been engaging with his customers on various forums, perhaps most notably Sherdog, which is among the largest. For example, he immediately resolved customer complaints regarding defects on this thread, which as a result turned into positive feedback. 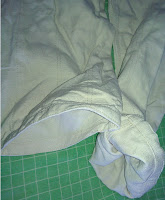 The development of new materials and weaves for use in gi construction has notably increased over the last couple of years. Datsusara was and still is a pioneer in the use of hemp: other companies have started to pick up on that, but as yet Datsusara remains the only one to successfully produce a 100% hemp gi. With bamboo, ripstop, hemp blends and unusual combinations like Gimono's 'Fortitude' fabric, I hope that innovation will continue in the gi world, rather than just different colour and patch combinations.

The Datsusara HCG-03 is available to buy here for $199.95, in either unbleached 'natural' white or midnight blue, although many sizes are now sold out. It is worth noting that Odell told me yet another version of the Datsusara hemp gi is due for release, with the HCG-04 expected to land around March 2013. I'll be interested to see if there are many further changes for the HCG-04. It would appear that most of the criticisms of the HCG-02 have been addressed in the HCG-03 without creating new problems, so aside from the lint shedding there is less obvious room for improvement (unless Odell can somehow reduce the cost, but I imagine that would be difficult without compromising on quality). 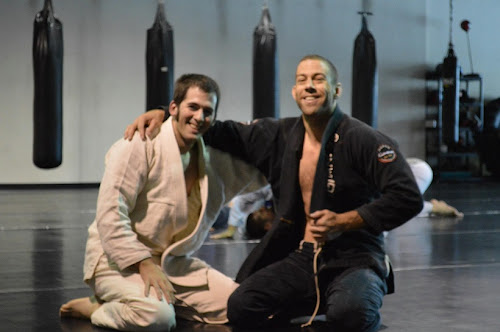 Update Dec 2012: Shortly after I posted up this review, Odell suggested that machine washing and drying at least once should prevent the shedding issue (I always hang dry). So, give that a try if you're having problems on that front.

As per usual, Datsusara owner Chris Odell has done a video describing the gi (interestingly, he says the shedding problem has been fixed: perhaps that's true for the midnight blue gi, but it is demonstrably still an issue with the gi I have). As I now know he is a dedicated nogi guy, it makes sense that the belt he is wearing is still white several years since I first saw him wear a gi. ;)