Last week, Carlos talked about judo and BJJ competition. This week, he shares the history of Gracie Barra Bristol.

slideyfoot.com: Several years ago, you set up the original Gracie Barra Bristol here in the UK. Why did you decide to come to the UK?

Carlos Lemos: When I was just a kid at Gracie Barra and I realised I was serious about jiu jitsu, Master Carlos got a group of kids – I, Roger, Rolles Jr and so on. He said, "I will train you guys to be jiu jitsu ambassadors and to represent us around the world." Today I speak four languages: he was the guy that encouraged me to study languages. He said "each one of you is going to be in a different part of the world one day, spreading the word of jiu jitsu."

With that idea, I came over here to the UK to get an undergraduate degree in business. Eventually I hooked up with some guys in Cheltenham and Bristol, it was an MMA club. I started working with them while I was in college, at the end of 2004. I was in the area until 2006, when I moved to Sutton Coldfield. I stayed for two and a half years.

slideyfoot.com: Were you still training in Bristol while you were in Sutton Coldfield?

Carlos Lemos: Man, that's another story. I used to drive from Sutton Coldfield to Bristol three times a week, because even though I had moved over there and got a place over there - it was much easier for me because I had a part-time job – I didn't want to let the Bristol club down. I kept driving, but at some point, it got too tiring and stressful. I was getting late to classes, and some of my students complained.

I decided it was too much for me. I had passed out driving many times on the way back, so it was really a miracle I didn't crash. I would find myself often hitting the guard rail because I was so tired. I would drive from Sutton Coldfield around 17:30, get here around 19:00 or 19:30, teach class, then I would go back. 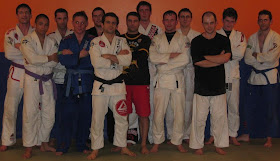 The class was supposed to be a two hour class, or one and a half hours, but with me, the class had time to start but never had time to finish. I love what I do, so would head home around 23:00 or something. It was really tiring, but also joyful and rewarding. I really like this town.

slideyfoot.com: What was the jiu jitsu scene in this country like at that time?

Carlos Lemos: I saw great promise over here, in terms of jiu jitsu, because British people are passionate about fighting. I saw a good perspective, but people still had a shallow view of what the art was: most of the practitioners weren't like they are now. Today, people are very interested in the art and training more with the gi, I see that more and more. Roger, Braulio and Lagarto are really setting the standard on the mat. I think you guys are definitely going to be the leading nation in terms of jiu jitsu in Europe, because of the calibre of instructors, you have the best in the world. I'm very optimistic about the scene over here, and even though I'm based in Chicago, I want to be involved.

Since then, I see that people are getting more technical, definitely. I see new aces flourishing everywhere. By rolling with you guys, I see that the standard in this country is far superior to what it was before. If someone comes over here thinking they will have a walk in the park, they're wrong man, you guys are going to give them a good run for their money.

The UFC helped us a lot. Everyone comes to a school thinking "I'm going to learn how to do that guillotine or triangle I saw on the UFC." When they walk into a jiu jitsu school, a true jiu jitsu school, like Gracie Barra, we don't teach people how to fight only. We teach them the Gracie culture, which was inherited from Carlos Gracie Sr to my master, Carlos Jr, to myself and the representatives over here, the black belts and our students. Then they see that the jiu jitsu we teach in Gracie Barra is something much deeper than that. It's a lifestyle, so they really get changed by this sport.

slideyfoot.com: A number of your original GB Bristol students have gone on to open up successful schools of their own, like Gary King in South Africa, Salvo in Bath and Geeza here in Bristol. How does seeing their progression make you feel?

Carlos Lemos: It's an honour, because many people live shallow lives. They don't live their dream, they don't exercise. They might hear something, they might preach something, but they don't practice that. Seeing these guys make the transition from an orthodox lifestyle, a nine to five job, to a jiu jitsu lifestyle that they're embracing with passion, doing the diet, training every day, and they're also making the sacrifices.

Jiu jitsu can sound very romantic, "wow, my own jiu jitsu school, I'm going to roll every day," but behind the stage you have restrooms that you have to clean, there are mats you have to mop when you're tired. You have the cold nights when your body is sore and your head is pounding, but you still have to come to the mats, clean your school and train with your students.

So, it's hard work, but it's rewarding to see that you can change people's lives through the art of jiu jitsu. To see these guys that were once my students and now they're doing that, I'm really glad for them and I'm very proud of what they're doing.