Continuing with half guard (mainly because I'm hoping that aggravates my injury less), I'm moving on to half guard passes. In terms of your basic positioning on top, you are primarily looking to get head control and an underhook, similar to top side control. If you can't get the underhook, keep your elbow close to their hip, so they can't underhook you. Sprawl back on one leg, so you are dropping your hips and putting maximum weight onto them. You also don't want to be too high, as that may give them space to shrimp and recover full guard.

Your opening goal is to get them flat on the mat: there are passes you can do while they are on their side, but generally speaking it is much easier if their back is pinned to the floor. Returning to Operation Tattered Belt, Saulo's discussion of passing half guard begins on p289 of his book, with a simple method of flattening the opponent out. Drive your free knee into their hip, then step your trapped leg up and away from you. Having generated some space, drive the trapped knee forwards as your return it to the mat, which should also help you drive your opponent to the mat as well. We did a quick resistance drill on that, to kick things off. I'm trying to think how to break a technique down into basic drill, basic technique, then troubleshooting. Tonight is the first time I'm testing that methodology, as this is a technique with which I'm fairly familiar.

If you are able to get the cross-face and an underhook, there is now the option of generating lots of shoulder pressure. This is my favourite way to pass the half guard: both Saulo and his brother refer to this as the 'esgrima pass'. Drive your shoulder into their head, which should cause them to turn their head. Your head goes on the other side, locking their head into place. It should now become hard for them to move, because their head is stuck.

From here, come up on your feet so that all your weight is driving through your shoulder. Even if you're small, this should maximise your weight. I'm only 66kgs, but if I can get all of that weight against somebody's head, it becomes more significant. From there, bounce your trapped knee to wriggle it free. As soon as it is clear, twist and put that knee on the mat. You can then kick their leg off your foot: some people prefer to kick the top leg, but I would generally go for the bottom leg.

I started with that 'best case scenario' option, keeping it straightforward to introduce students to the concept and mechanics. For the next technical section, we had a look at what to do if that doesn't work (what Carlos Machado referred to as troubleshooting when I interviewed him in Texas). If you find they are blocking your cross-face, use your head instead, putting that on the cross-facing side. Slide it in tight to their skull. The arm that would have been cross-facing them grabs their same side knee, to keep it in place. Once your trapped knee clears their legs, bring it to the mat and switch your grip from their knee to their elbow. Slide through to scarf hold. 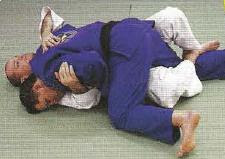 You may also find that they have got up onto their side, going for their own underhook. If you aren't able to establish your underhook, use a whizzer instead (overwrap their underhooking arm with your own). From there, drive into their chest with your own, in order to flatten them out. You can then crossface, and work to get your underhook.

If you're really struggling to finish the pass because they have a death grip on your foot, try circling your free foot backwards, to hook over their inner thigh. In Xande's version of the pass from the earlier picture, he starts off with that hook in place. This should help to press down on their thigh to make some space, in order to pull your trapped leg loose.

Whatever else you're doing, you can always try to distract your opponent by attacking their upper body: for example, go for a bent armlock. If you can get them to start worrying about the submission rather than keeping their legs locked, you may be able to work the pass more easily. Best of all, you may even finish that submission, which ends the match right there (but remember, if you're drilling passing in class, you want to focus on passing, as that puts you in a much better position to submit).
_____________________

Teaching Notes: I have a tendency to throw all the information at people at once. Continuing my approach from last week, I wanted to try and break it down a little. I began with a simple drill to flatten them out. That was followed by a basic version of the esgrima pass, without going into much depth on 'what ifs' and the like. After they had drilled and done progressive resistance on that, I went through the same technique, but with more details. So, what to do if you can't get the cross-face, hooking back if you can't dislodge the leg, whizzer if you can't get the underhook etc.

I think the structure was ok, although I'm not certain I'll keep the drill at the start. I also think that four separate things to keep in mind on the last bit of drilling is too much: I heard a few people who were having trouble remembering all of them. Naturally I was there to remind them, but I took it as an indication I should streamline that section. So, perhaps just the cross-facing with the head and point about submissions, moving the whizzer and underhook details to the opening drill.

Mike also had some useful feedback at the end, noting that he had found during sparring that people were tending to focus heavily on the underhook but forget about the cross-face. The underhook is important as that stops them taking your back, but the cross-face is equally if not more important in terms of establishing a strong control. So, that's something to emphasise more next time.

During sparring, I was able to finally implement a suggestion Julia made ages ago, about switching partners in the midst of drills in order to give people a range of body types to test technique. Dharni has mentioned this too, saying that you can start to get used to your partner's reactions if you're with the same person for the while session. Normally if I switch, I do it after two rounds: tonight I did it after one.

That meant I had to be a bit more careful, because I always do specific sparring: one person is on top, the other on the bottom. If you switch after one round, then you have to make sure everybody who was on top now goes on the bottom, which isn't something I normally have to keep in mind. Still, all seemed to work. If I had a larger class, I'd probably have to say something like "everybody who was on top, move round to the person on your right".

I had a look to see if anybody was playing with the lockdown, but as nobody was (except for a brief bit of footsie from one of the blue belts), I decided to leave teaching that pass for another lesson. Previously I combined the basic half guard pass with beating the lockdown, but although they are both from half guard they aren't immediately related. Therefore the two techniques probably work better in different sessions, rather than trying to combine.

I'm still finishing off each lesson with a review of the techniques that day, using the John Will method of having everybody face the same way. I went through the technique solo at the front, which worked well because it meant nobody was without a partner to run through the techniques. Being able to say "left arm here, right arm here" makes things so much easier. I would like to try that method for teaching a technique at some point too, but not just yet. Maybe if a particularly large number of students turn up.
slideyfoot at 20:30
Share