I'm a big fan of Wales, so when Rob Taylor emailed me to ask about his club being featured in JJS on the Road (it should be appearing in Issue #14, I think: keep an eye on the website), I jumped at the chance. Not that I was going to get much of a chance to look around the area, but it at least means I can enjoy the gorgeous Welsh landscape from a train window. I should really cross the border more often, as I'm only over in Bristol. It's also cool to finally meet a very familiar name from the internet (Rob isn't the type to use an anonymous nickname, so just posts as 'Rob T'), who I mainly saw on the now largely inactive EFN. Later I met another when getting a lift back, Steve, which was also cool. :)

Today was a flying visit, getting on a 06:46 train from Bristol Temple Meads, into Swansea at 08:44, interview Rob, get on the mats, then back to Bristol at 12:28. Rob kindly picked me up from the station, driving down to the spacious premises of the Chris Rees Academy in Swansea (which has even more affiliates than I realised: thirteen, according to Rob!). Chris himself wasn't able to make it as unfortunately he was ill, so I'll probably be emailing him later to get his perspective on a few of the questions.

By the time we had finished talking, the class was already underway. It's a relaxed environment on the one hand, with a few higher belts chatting at the side, plus a number of people without a gi but joining in the gi class. On the other hand, there is a certain intensity, particularly in the sparring, which comes from the heavy focus on competition at the academy. Still, they manage a good balance, as while the sparring is hard, everybody is friendly and there is close supervision. The fact this club is in Wales helps too, as I've always thought the Welsh have a naturally friendly accent. ;)

A purple belt called Omi was running the main class, while Rob taught the beginners over to the side (the mat space is huge, so can easily accommodate two classes at once). I joined in Omi's class during a guard passing drill, where I went with Matt, another purple belt. You weren't supposed to grip the gi, which I erroneously took to mean you couldn't use your hands at all (getting up for a 06:46 train probably addled my brain even further...), but that's still a good drill in terms of working footwork, pressure and positioning when passing. 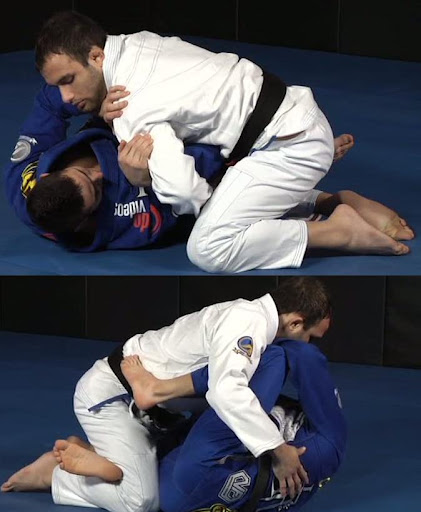 After that, we moved into the main technique of the day (although as class had been going for a while, perhaps I missed an earlier technique). This was all centred around maintaining the knee shield, so fit nicely with the all the knee shield passing I've been doing recently. The position looked similar to how Caio Terra demonstrates it, with the knee you have across staying high (just under the shoulder), but braced by your elbow inside the knee rather than by their neck.

Your other elbow slips inside their knee. This is to provide enough space for a detail I haven't seen before: raising the knee of your hooking leg, to block them from stepping through. It is a bit like having a knee shield on both sides, as again you're blocking their hip. Omi noted it is important to have the foot of your hooking leg on the floor, to provide support for angling your knee into their hip. That's distinct from the picture I've stuck in here, where you'll notice that Terra's foot is raised (possible he puts it down later, as I haven't watched that DVD in a good while).

The only problem was that my groin injury means I can't do that with any resistance at the moment, as either leg position aggravates my abductor. I struggled from the bottom as a result, although I suspect I would have had trouble anyway against the impressive teenage female student I was training with: she's got excellent hip movement and a fast, aggressive game.

On top I was more comfortable, where I was mostly working with an older purple belt (her father, I'm guessing?). The pass I taught a a few weeks ago worked well, and trying to wriggle my head into their armpit gave me a clear goal to work towards. It was tough to get my knee across into their hip like in Dónal's pass, but that probably depends on the type of game the bottom person is playing. 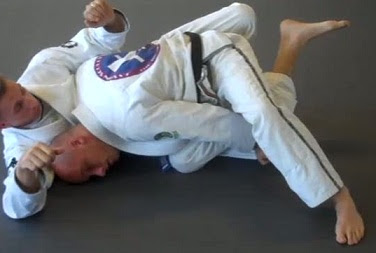 The competitive outlook of the academy was emphasised again during the sparring. Omi divided the room by weight into several groups. Each group gathered in a rough square, then two people sparred in the middle, starting from their feet. Omi set the timer, then it was basically like a tournament match.

My leg wasn't up to going from standing, so I started on my knees. With Matt, I took the opportunity to try out the pass from Dónal's private, but I wasn't careful enough when reaching for the collar to pull them in towards me. Matt immediately locked in a triangle. I was able to resist for a while, going for the "drive their knee to the floor" escape, but didn't move around behind towards the head like I should have done. While I was considering my options, Matt snuck in a nice wristlock on my trapped arm: I often forget about those, so that's a useful reminder. :)

The next 'match' went better, but then I was with a blue belt who was also most likely taking it a bit easier on me due to the injury. This time I was fortunate in that he left me an opening to pass and then slide into mount. Once I had that, I wasn't letting it go. However, this also highlighted the importance of coaching. I would have happily sat there all day, ineffectually going for ezequiels. Instead, due to Omi's prompt to walk the knees up into their armpits, I was able to secure an americana. Tiring them out for a while possibly helped, but I probably would have never remembered to move my knees if Omi hadn't made that simple comment.

Coaching is an important skill, and using this sparring format is a great way of getting everybody to practice. It does take a bit of confidence - it was only really the purple belts saying anything - but this is only the first time the lesson has been run in this way. Definitely a good idea if you want to try and improve your academy's competition performance. It would be interesting to know how to deal with bad coaching, or a fear of saying the wrong thing (which I assume is what stopped most people from speaking up). Just practice (both in terms of more practice coaching and more practice in BJJ, so you'd have a firmer grasp of the 'right' answer, so to speak), or would that have to be taught separately?
slideyfoot at 12:00
Share