For a long time now, a major goal of mine has been to support women already in jiu jitsu and encourage others to give BJJ a try. I was therefore appalled when I read that a woman had been raped by two of her team mates. I would like to turn the strong feelings about that incident towards something positive. Hence why I've decided to run another GrappleThon (you can read about last year's event here) in aid of the important work undertaken by the charity Rape Crisis.

My fundraising page is here. Please donate whatever you can spare to make a positive change (JustGiving functions outside the UK too). You can also donate via text message, by texting GRAP54 £1 to 70070.

The GrappleThon will take place on the 4th May 2013. Just like last time, we're planning to stream it live over the internet: Steve has some gadgetry up his sleeve. :)

No Dónal tonight, as his partner was in the process of having a baby. That meant that instead Geeza was taking class, which means a very different atmosphere and class structure. It has been quite a while since I last made it down to one of Geeza's classes (I think I may not have been since the last GrappleThon, so that's about four or five months), so I had forgotten how Geeza often has small variations to the standard technique. Although it's also possible this was just material of the Gracie Barra curriculum, but I'm not sure. 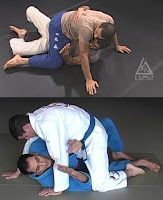 Either way, it was basic mount escapes tonight, with a twist. I was expecting the typical elbow escape to start with, but Geeza combined it with the heel drag and releasing the hooks from low mount. They have grapevines, so first circle your leg around to free your leg, just like in Gracie Combatives. Put that leg flat, then circle the other trapped leg free and immediately bring it right across, moving into the heel drag. Shrimp out to half guard, then switch so your outside foot is hooking inside, rather than your inside foot hooking out. Geeza prefers this, even naming them 'good half guard' and 'bad half guard'. The reason he likes it is because having the outside foot hooking gives you greater mobility when recovering full guard, which is the next step..

That was followed by another basic escape, the bridge and roll. Interestingly, Geeza didn't emphasise the bridge with his version, instead focusing on trapping the arm. If they grab your collar to look for an attack, grab their wrist with your opposite hand and their triceps with your same side hand. Again, this follows the method in Gracie Combatives, although the reasoning is different. Rener does this because he says it makes it harder for them to pull their arm back and punch you.

Geeza's explanation was that grabbing the triceps means you can use your elbow to block their knee, while still being able to drive your elbow into their ribs with the wrist hand. That makes sense, although you can also do that if you grab their wrist with your same side hand and the inside of their elbow with your opposite hand. The difference is that the former is better for blocking the knee, the latter is better for bracing your elbow and arm into them when bridging.

The other option was for when they wrap under your head, where again Geeza advised grabbing the triceps. That's as opposed to the 'comb your hair' grip which I'm more used to, but both will work. Geeza then drives his other arm into their same side armpit to roll them over. Once again, that closely follows the methodology of Gracie Combatives. The main alternative is to instead push on their hip, as per Roy Dean and others.

As ever I couldn't join in properly on the sparring, so instead tried various drills to work around my injury. With one of the blue belts I worked on the pass Dónal taught me last week, where my main concern is avoiding that triangle. Obviously he won't be available for the private tomorrow, but possibly next week. I'm expecting that his schedule may be a little erratic over the next few months, which would be totally understandable for a new parent. :)

After that I did some specific sparring under side control with Geeza's eldest son, who is a good technical rolling partner. We kept it fairly light, with Oli trying out various submission attempts. Not being able to use my left leg properly is an annoying hindrance, but I can still work on staying tight and observing the kind of attacks people try in certain positions.

Finally I did some open guard with Berry, which is one of my default positions when I can't use one of my legs properly. I aim to go to the Xande spider guard variation where you're pressing into their bicep and pulling on the same side collar. It doesn't always work, but as long as the other person is much bigger or a lot more experienced than me, I can at least use it to hold them off for a while.
slideyfoot at 09:57
Share