At 05:11am on Wednesday 24th April, I got an email from Blogger telling me that my website had been automatically deleted, apparently because it was a spam blog. Obviously that was a little surprising to read after almost a decade of blogging. Fortunately, you can appeal deletion, particularly as it is an automated system so they assume they will get some false positives.

You just go to your blogger dashboard, click on the bit that will now say 'deleted blogs', then hit the 'Restore' button. You'll be asked for a phone number, to which they will text an activation code. Once that's done, your blog is put into the review queue. They say two business days, but it can take a little longer (in my case, it wasn't far off two days).

I sent the unlock request at around 17:00 on the 24th April. I then set about getting something sorted so readers wouldn't see a 404, shifting my custom domain to another blogspot with a temporary page, with links to my back-up blog on WordPress. As something like this has happened before, when the domain registrar went down after a DDoS attack and as a result took the blog offline, I already had a fairly full back-up of everything up until January (the rest I could get from Google Cache).

At 12:56 on the 27th April, I got another email from Blogger thankfully telling me the blog had been reinstated, acknowledging that indeed it was not a spam blog and they had made a mistake. It's an automated message, so there was no indication of why it had been deleted in the first place, but at least it is back. Checking around, I can see there is a place where you can report spam blogs. That makes me wonder if it was malicious, considering the blog went down right after I put up a prominent link to the original LloydIrvinRapeTruth.com site. That's probably just paranoid of me, though. ;)

I used to really like Google, but this year they've now done two things that have annoyed me: getting rid of Google Reader and then randomly deleting my blog with no warning. It's quite worrying that Google can apparently pull the plug any time they feel like it, particularly as I've got no guarantee it won't happen again (although on the other hand, they do provide this platform for free, so I can't complain too much ;D).

Still, if it does ever go down again, I'll try the same back-up process. If you're reading this via a feed, then should I ever go quiet for an extended period, it would be worth checking my back-up, here (presuming that doesn't go down too).
________________

I had considered teaching something else tonight, but as I've been super-busy with writing commitments over the last few weeks (for some reason, the important deadline for all of them seems to be tomorrow, which is the same day as a big meeting at work), I stuck with a familiar lesson. There was only one slight tweak I wanted to add, from the Leverage Submission Grappling seminar #03, which relates to the finishing position.

The RNC is a fundamental technique to BJJ. Everybody with more than a few lessons under their belt knows that you're going to be looking for it, so they will immediately be trying to create barriers with their arms and hands. In order to clear a route to the neck, there are numerous options.

First, you can adjust your hand positioning to maximise your efficiency. If you have one arm under their armpit and the other over the shoulder, then it can be helpful to grip palm to palm or grab your own wrist, with your shoulder arm on top. That means that as soon as there is any gap between the neck and chest, you can immediately slide your arm into their neck. Others prefer to grip with the armpit hand on top: that way, if your opponent pulls your armpit hand down, they are giving you access to their neck with the choking hand, which is what you wanted anyway.

Another problem is that people will also tend to tuck their chin. Some people advocate unpleasant methods to force your way through to the neck in that situation. For example, Stephan Kesting has a list here: the results of that kind of approach (though Kesting does make a point of saying he is not fond of pain-based options either) can be seen in this video of a brutal Baret Yoshida match. That is not how I want my jiu jitsu to look.

My goal is smooth, technical, leverage-based jiu jitsu, causing as little pain to the other person as possible. As Saulo says in my favourite BJJ quote:

"You have to think that your partner, the guy that you're training [with], has to be your best friend. So, you don't want to hurt him, you don't want to try to open his guard with your elbow, make him feel really pain, because jiu jitsu is not about pain. You have to find the right spot to save your energy"

I strongly feel it is best to avoid hurting your training partners, for four additional reasons:

There is a less nasty option you could try for opening up their chin, from Andre Galvao. If they really shove their chin down, this may not work, but it is worth a go. Twist your hand so that your thumb is pointing down, then as you slide the arm to their neck, twist the thumb back up to lift their chin.

If I find I have no option except something brutish (e.g., crushing their chin until they tap from pain or lift their head), my preference is to instead transition to a different attack, like an ezequiel, a bow and arrow choke or an armbar (which I'll be covering in later lessons). In my opinion, if I get to the point where force and pain are the main routes to finishing a submission, then my set up was poorly executed.

You can also try tricking them into giving you access to the hold you want, a handy tip I saw on a John Will DVD. For example, when you try to get an arm around their neck, a common reaction on their part is to grab your arm and pull it down. If you respond by pulling up, they will normally pull down even harder. This means that if you time it right, you can suddenly switch direction and swing the arm they are pulling down across your body. This should sweep their arms out of the way for a moment (try to catch both of their arms when you do this). Make sure your other hand is ready and waiting near their shoulder, as you can then immediately bring that other arm across their suddenly undefended neck. 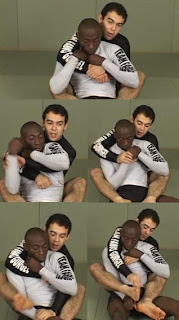 Even better, you can take their arm right out of commission. With one of your hands, grab their wrist. Shove it down towards their legs, then step over that arm with your same side leg. When you then re-establish your hook (or pin your heel to their ribs, or put your leg behind their back), they are left with only one arm to defend against both of yours. If they've grabbed your wrist, twist your palm outwards, shove it down and out, then again step over their arm with your leg. Make sure you maintain pressure, so they can't simply swim their arm free.

There is also the method I learned from Dónal. Grab their wrist with your armpit hand. Drop to the choking arm side, twisting your hips to increase the range of motion for your leg. Shove their arm down, then swing your leg over your armpit arm. Grip your own shin with the armpit hand, then using both your leg and arm, get your foot to their spine to trap their limb.

Now that we've got an arm into the neck, it's time to complete the rear naked choke. The elbow of the choking arm should be under their chin. You don't want to leave any space, as the idea is to press into both sides of their neck. This will close off their carotid arteries and prevent the flow of blood to the brain. That is an efficient and safe way of subduing an opponent.

Reaching past their shoulder, you are then going to grip the bicep of your free arm. This is to lock the choke in place. It will be difficult to grab your bicep straight off, as your opponent knows that's dangerous. You can instead secure your initial arm by gripping the back of their shoulder. Stephan Kesting has a useful video on RNC details, where he talks about holding the ridge of bone at the bottom of the shoulder blade, using what he calls a 'tiger palm'. From there, switch to gripping palm to palm over their shoulder, dropping the elbow of your back-arm down along their shoulder blade. That will further help to lock it in position: as Demian Maia demonstrates, you can even finish the choke from there. If not, you can then do what Kesting calls the 'creep', wriggling that elbow across their back to cinch up the choke.

When you have managed to grip your bicep, make sure both your elbows are in front of their shoulders. In other words, your armpits are resting on their shoulders. The elbow drops straight down. As Levo emphasises, this now means that both your wrists are hidden, making it difficult for them to strip your grip. It also makes the choke tighter, as both of your arms are directly by their neck.

Bring the hand of that bicep arm to the back of their head: a commonly used version is to press the palm into their skull, but there are various options, coming down to personal preference. Using the back of your hand against their neck is arguably better, as that may slip in more securely than palm down. Also, palm down is easier for them to grab, if they try to peel your fingers off their skull. Either way, when you're locking in the choke, don't reach your hand forward over their shoulder. If you do, then they can armbar you using their shoulder as a fulcrum. Instead, slide it behind the head. Bring your head next to theirs on the bicep gripping side, to further cut off any space. If for some reason after grabbing your bicep you can't get your other hand behind their head, grab your own skull, using that grip to finish from there. Staying close to their back, expand your chest and squeeze your elbows together.
________________

Teaching Notes: In terms of teaching, I cut down the first section a good bit, which I think works better. I could add in a few other good methods of trapping the arm, but at present I'd rather use those for a future lesson on some other submission from the back, perhaps the ezequiel or sliding choke.

This lesson was useful for my own learning too, in regards to escaping the back. I got in plenty of sparring time, so had a chance to practice what Dónal taught me. First off, I forgot to bring my leg up on the choking arm side first. I'm also still escaping straight underneath their side control rather than getting on top. I think partially that's because I'm not being confident enough and shoving their leg with my arm, and I'm also forgetting to hook their leg as I pop my hips out.

I won't be taking private lessons again for a few weeks, because Dónal has some important exams coming up so I can happily wait until he's done. When he gets back, I definitely need some more work on back escapes! :)
slideyfoot at 20:30
Share