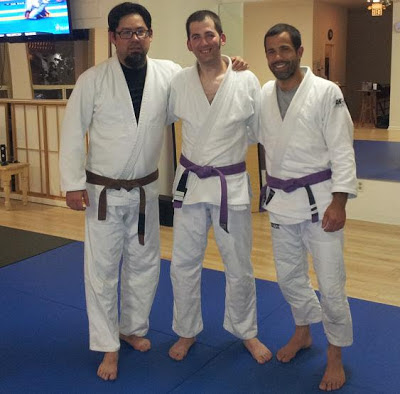 I first 'met' Dave on the JiuJitsuForums website a couple of years ago. We've been chatting on the forum, in PMs and on Facebook for a few years now. When he read I was heading to his neck of the woods on my California trip, he immediately suggested meeting up (I'm not the first blogger to have met up with Dave, as Julia also got to train with him during her amazing trip a couple of years ago. Coincidentally, she also recently put up an article based on some of Dave's JJF posts). We had a few drinks at Thirsty Bear in San Francisco, where he mentioned that his friend Adam at Tatami Multi Arts had an open mat the next day, after watching Metamoris II.

It wasn't too difficult to get over to the club from where I was staying in San Francisco. I walked down to the Powell St BART station (if like me you stay at the HI Hostel Downtown, that's the closest one), then bought a $3.95 ticket. The machines randomly go out of order, which was confusing, but buying the ticket is easy enough. The main strange part is that you have to know the value of the ticket beforehand, rather than the usual method of typing in your destination.

I took the train for Pittsburgh/Bay St, then changed at 19th St Station in order to travel towards Richmond (as Dave said in his handy directions, the trains are synchronised, which makes it simple). Getting off at El Cerrito Plaza, I was ready to walk to the club with the GPS on my phone, but Dave was already there waiting for me in his car. He also very kindly lent me a gi (I had my Gimono with me, but it's handy not having to wash it). First time I had worn a Fuji, which always gets good reviews: seemed comfy and I like how plain it is. It was just Dave, Adam and me, resulting in a relaxed open mat where we exchanged a few techniques.

Dave was the most experienced, with 15 years under his brown belt. He wanted to show Adam and I a few 'small guy' techniques (Adam is roughly the same size as me), initially from side control. We started with what I was most interested in, a method for maintaining side control Dave had mentioned at the Thirsty Bear last night, learned from a 130lbs training partner of his.

You're holding side control in the usual way with a cross-face. Bring your chest low to the ground, then aim to slide the upper part of your chest just under the exposed side of their pectoral muscle. Keep sliding forwards, maintaining a crushing pressure. Done right, this makes it hard for them to breathe. The difficulty is finding the right spot. If you think of tectonic plates sliding over each other, it's a bit like that.

Next up was a way of transitioning to knee on belly. From side control, move your arm on top of their throat, gripping the far collar, then shift your hips to point towards their head. This is reminiscent of reverse scarf hold. Your other arm is over by their far hip.

Use that far hand to post slightly, clamping in tight to the hip. Shove your hips into theirs, then pushing off your outside leg, slide your near leg right into knee on belly. Your back, hips and bum are blocking their knee from getting in the way.

Finally, Dave went through a straight ankle lock set-up, moving away from side control. In a guard passing position, you notice they don't have any grips and have a foot on the outside of your hip. Immediately fall back, trapping that foot on the way. Don't telegraph what you're about to do by wrapping up their foot first, or they'll move to prepare their escape.

Once you've fallen back, put your foot on the attacking side on their hip, to prevent them sitting up and coming forward. Your other shin presses into the back of their same side knee, again to stop them sitting up. When you can, shift from using your shin to pushing with your foot.

To attack the ankle, bring your outside arm around it, using your other hand to feed your same side collar to that first hand. Grip as high as you can. You can then twist the blade of your arm into their achilles tendon and lean back for the submission. Dave prefers to just use that collar grip rather than moving into a figure four grip, as he finds having just the one hand their better facilitates cutting into their tendon with the blade of our arm.

Then it was my turn to show some stuff. I picked the guard pass and sweep I've been working on with Dónal: it was handy to try and teach it again (I've taught both at GB Bristol, here and here, in simplified versions) to help me work out the important details. The full write ups are in my private lesson notes, which is split into multiple parts for the pass (1, 2, 3, 4, 5) and just a single entry for the sweep (here).

Sparring was fairly brief, as I needed to get back to my hostel, going a round with Dave and then Adam. Both times the spar went in a fairly similar pattern, which tends to be how a lot of my rolls at drop-ins go. I flopped to my back and worked spider guard, trying to retain my position and also looking for an opportunity to tripod and/or sickle sweep. I almost hit it a couple of times, but made the common error of not coming up fast enough to secure the position.

I briefly went to the running escape when Dave passed, then recovered my guard, but I think that was only because Dave was giong quite light. With Adam, I had a brief pass attempt, but failed to get chest to chest contact. That meant that although I had some control of his arm and was moving round to north south, he had enough space to spin and escape.

It was cool to finally hit the mats in California: thanks again to Adam and Dave for their hospitality! If you want to get in some good training in the El Cerrito area, be sure to check out Tatami Multi Arts. :D
slideyfoot at 22:49
Share