My final training in California was at another beautiful facility, the University of Jiu Jitsu. I have admired the instructionals of the Ribeiro brothers for a long time and Saulo is a jiu jitsu hero of mine, meaning it was an honour to train at his gym and interview him.

This was all thanks to Dave Kim, the man who both originally pitched the idea of the BJJ Library to Saulo and now runs it (that includes filming, admin etc, so he's a busy man), having moved across the country to do so. He contacted me about reviewing the site some time ago, then when I mentioned I was coming to California, he immediately offered to drive me over to the academy and set up the interview with Saulo. I felt very lucky to get to chat to the man himself for almost an hour as a result.

The University is yet another stop Julia visited back in 2011 during her West Coast trip. Unlike that time, Saulo was not there to teach the class, as this was the early morning 09:00-10:00 session. The instructor was Renato Vieira (sitting next to Saulo in the picture above), who judging by Google and Facebook is associated with Rodrigo Pagani, one of Saulo's black belts. If you're on BJJ Library, Pagani is the guy who has the Curu Curu guard videos, although I haven't looked at those yet. Vieira led four of us through a standard warm-up of running round the room, facing in, knees up, shrimping and so forth. That progressed to a strongly judo influenced set of drills, with grip fighting followed by some takedown entries.

The technique for the lesson was a deep half guard sweep. You have half guard with a knee shield. Move your head and arm close to their non-wrapped leg, curling in tight. Stretch out their trapped leg with both of yours by straightening them, while at the same time shooting the arm you've brought near their other leg underneath it. Bump them up with that arm, bringing it past their bottom, as you turn your body. Your reaching arm now locks above their knee, while your other elbow stays hidden: the first thing they will try from top deep half is isolating that arm, therefore keeping it safe is a priority.

Hooking under their ankle with your leg and lift, using that to spin to the top and initiate your pass. When Vieira walked round to check on drilling, he added another detail for Dave and I. Normally deep half results in them having a leg behind your head, but sometimes they may be able to get it past your head. If that happens, switch your grips to instead gable grip and lock around the hip of that same leg. From there, you still want to lift up their ankle, but simply roll them backwards. Come up and use your control of their hip to transition into a single stack pass.

Sparring started with Dave at a fairly light pace, probably because he is both bigger and more skilled than I am. I was looking for the tripod and sickle sweep again when we were in open guard, but kept being blocked because Dave would crouch slightly and bring a knee forward. I need to develop a good follow-up sweep for when that happens, particularly as Dave was not the only person to do that to me today.

The next roll was with a green belt (an unusual rank for an adult in BJJ, but several schools use it, such as ATT and University of Jiu Jitsu), again a bit bigger than me. He also recently starred in a video where Saulo drains his cauliflower ear, which got a bit of traction on YouTube. They were talking about it before the lesson, although it appears Saulo did a good job as I didn't notice the green belt's ear being particularly messed up. I briefly had an attempt at the windscreen wiper sweep, but soon got passed.

He had little trouble squashing me under side control, where yet again I relied on the running escape to save me. My partner's response to it was stepping over the head, whereupon I went to turtle and tried to return to guard, but mostly just got stuck in the running escape. He would step back over to repeat the pattern, until the timer went. Like John said in Texas, I must develop a chain of escapes rather than 100% running escape, which has been an issue for a while now.

My final roll was with the six-month white belt who like me was visiting from out of town. Naturally I had an advantage given I've been training a lot longer than that, so could practice my top control and closed guard. For once I was able to successfully use the overhook from closed guard, then slowly work to a triangle. However, that again was very much down to the experience gap, not any skill on my part: in another six months, I am sure that roll would have been quite different as he wouldn't leave those gaps.

Saulo arrived after the class had finished: he is a lot bigger in person, with arms larger than my head. Saulo's passion for his latest project, the BJJ Library run by Dave, is clear. Saulo and Dave have a lot of plans for the site, which also came out in Saulo's interview, along with his thoughts on moving to America, teaching methodology, growing BJJ and numerous other topics. That will all be popping up in a future issue of Jiu Jitsu Style. (Update Feb 2015: The whole interview is now available here) 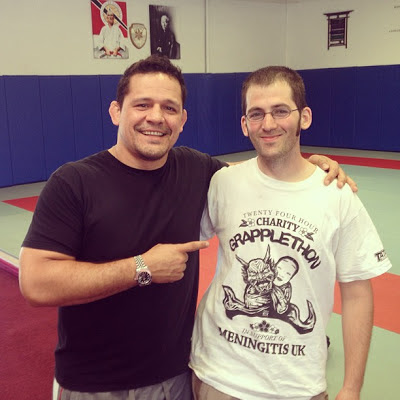 Thanks again to Saulo for the interview and to Dave for being such a great host. Dave welcomed me to San Diego from the Greyhound station, drove me around the city to show me the sights the next day, then brought me to Saulo's school for training a few hours before I flew out. :D
slideyfoot at 12:50
Share