Like the Gracie Academy, Fabio Santos has also been present for much of BJJ's global expansion. His teaching in the US dates back to at least 1983. He was running classes in New York for strength and conditioning, but had a few mats off to the side where he would show a few moves at the end of class. He eventually found himself in San Diego after a brief stint in Utah, followed by a much longer period teaching at the Gracie Academy. Santos was the main instructor there when Royce was preparing for the first UFC.

Santos has taught in San Diego since 1998: he has seen the jiu jitsu scene there explode over the last decade and a half. His gym is of fairly modest dimensions, without the swish facilities of the Gracie Academy, but the training was excellent with some great sparring partners. I was not the only visitor: my drilling partner was a blue belt called Alex from Tristar up in Montreal, who teaches boxing and jiu jitsu at his club.

The main reason I was there (and indeed set off on my California trip in the first place), apart from interviewing Santos about his many years in jiu jitsu (you can now read it, here), was to meet up and train with two cool people I know from the internet. I have met Fightworks Podcast host Caleb before, during the ADCC 2011, but this was the first time I would get to train with him. The other person was Dagney, who I know via her excellent blog. She kindly picked me up from my hotel and gave me a lift to the school, so we had a chance to get in a good chat on the way.

Like Tatami Multi Arts, this academy was also on Julia's West Coast trip. I recognised a couple of settings for her pictures, such as the bench outside and indeed the person sitting on the bench in Julia's picture. In my case, Alex Brandao greeted me from his car instead. ;)

The class was even less formal than yesterday (the only formality I noticed was each person who came in shook everyone else's hand, which I last saw at Rilion's academy in Houston), with no real warm-up, going straight into a drill. Fabio is old school and believes in the importance of the original self defence curriculum. He therefore began with an escape from them bear hugging your arms. Brace your hands against their hips, move to the side and grab their far wrist, step in front then take them down with a hip throw.

The two main techniques both related to rolling your partner over, preventing the pass, straight into a reversal. Grab their arm on the side they're passing and straighten out your arm, shoving it under their body towards your opposite hip. With your other arm, reach over their back and grab their belt. Use those grips to roll them over, shifting around in mid-air to end in side control

For the second technique, they are looking for the double underhook pass. Grasp one of their arms with both of yours, push it across and clamp it to your hip. Roll through in the direction their hand is pointing. That should flip them over, meaning you can establish side control, or alternatively you could go for a waki gatame armbar. Each technique was repeated three or four times without much talking, then it was down to us to drill.

It turned out that instruction does not really progress beyond that level of detail. I asked Santos about that later: he used to show techniques in a lot more depth, but interestingly he has since found that he prefers people to work through the technique in practice (there is therefore plenty of time allocated to drilling), rather than relying on him to make multiple corrections.

I can see the point of that (particularly as there were lots of black belts on the mats, due to the age of the gym), although my personal preference when learning is as much detail as possible. In teaching terms, I'm still not sure of the best approach. Right now, I'm trying to combine the two, starting with a simple movement, complicating it later.

Sparring was divided into groups, due to the limited mat space. That has the advantage of an automatic rest period, which for lazy people like me is handy, particularly given the humidity of the academy. I was dripping with sweat at the end of the class, despite having only rolled three times at a comparatively light pace.

Training with Caleb was interesting, as he doesn't have the game you might expect. It turns out that Caleb is very flexible, which completely changes side control. He is more than happy to let you pass, establish side control, then suddenly a pair of legs come from nowhere and you're fighting to avoid getting sucked into a crucifix. Side control goes from being a comfortable, dominant position to a risky prospect where you're constantly worried about limbs appearing at bizarre angles. I have sparred with people like that before, such as Trev from RGA Bucks, but Trev has long legs: Caleb does it without being all that tall, which is impressive. 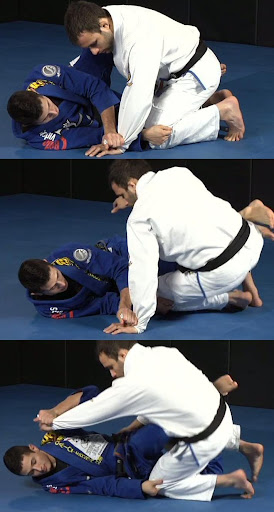 Dagney was next, who as an experienced brown belt also went fairly light. We got into a pattern where I worked for the knee shield half guard but failed to set up a sweep. There are two I want to develop from that position, both of which Nick Brooks originally taught me and I've taught at GB Bristol in the past (with some pointers from Caio Terra's comprehensive half guard DVD). I'm clearly missing lots of details, so I need to review those. Dagney would then pass, I eventually escaped side control, then back to the knee shield.

My final round was with Alex, my drilling partner from earlier. He carefully controlled his pace, never pushing a position to the point of a struggle. If we were getting stuck at any point (e.g., when I kept going to the running escape), he simply disengaged and went for something else, which was refreshing. There are not many training partners who are that mature. Alternatively, it could just be he was so much better than me that it was no challenge for him to keep pushing. Either way, yet another good reminder to improve my back escapes, as I end up with my back taken far too often. ;D

I wasn't wearing my glasses, so was confused when everyone started applauding some guy in shorts and a t-shirt over by the entrance. I thought at first he might have been some long time member of the gym who had just come back from an injury or time off, like Caleb and Dagney. Once he sat down and started talking, all became clear: this wasn't just another member of the gym, it was Relson Gracie. He was running a seminar the next day, which I would have definitely tried to attend if I was on a solo holiday, but running off when my girlfriend had patiently let me train twice in a row would have been rather unfair.


After I finished my interview with Santos and took some photos, Caleb drove me to his house where he cooked a delicious meal for Dagney and I, with an amazing view from the back of his home. We chatted jiu jitsu, with a more extended recorded chat later, as Caleb asked if I wanted to change my usual role and be the interviewee.

I don't think I'm particularly worthy of being interviewed, especially on Fightworks (still by far the best BJJ podcast out there), but it did give me another chance to plug the GrappleThon concept again, an opportunity I always try to take. Not to mention that to write a blog in the first place you have to have a certain degree of narcissism: I'm generally more than happy to talk about myself. :)

Caleb kindly also gave me some money towards the GrappleThon that took place back in May, in support of the charity RapeCrisis. My page is still open for donations here, in case anyone fancies following Caleb's example. ;D

The interview itself is now available here: if for some reason the download doesn't work, you can just click the 'play' button for the audio. My section starts about 35 minutes in.
slideyfoot at 18:28
Share