Short Review: If you're into combat sports of any sort and you haven't heard of Gene LeBell, then this book will give you an idea of why he is such a towering figure. LeBell has done it all, met everybody and even remains relevant in MMA today, as one of Ronda Rousey's coaches. This book is stuffed with engaging anecdotes from LeBell's ridiculously eventful life, ranging across boxing, judo, pro-wrestling, films, stunts...the list goes on. He's grappled 700lb black bears, been in films with Bruce Lee and Schwarzenegger, he trained Elvis and he's doubled for Rod Steiger. Even if you don't care about martial arts, something in this book is bound to grab your attention. Available here in the US (or here, in the UK, which is where I bought it from), or from LeBell's site.

Full Review: There aren't many people who could call their autobiography The Godfather of Grappling without hyperbole, but if anything, that title is perhaps underestimating the importance of Gene LeBell. He was born in 1932 and has been in and around combat sports ever since, as his mother was the promoter at the Olympic Auditorium, a famed boxing and wrestling venue in Los Angeles. He trained under catch-wrestling greats like Lou Thesz and Karl Gotch, started boxing at age 11 (when he got to spar a certain Sugar Ray Robinson) and went on to win major judo titles in 1954 and 1955.

LeBell also became a teacher of huge names himself. Chuck Norris, Bruce Lee and Hayward Nishioka were all LeBell's students. As if that wasn't enough, LeBell was the victor of what could arguably be called the first MMA fight in the United States when he faced boxer Milo Savage, after being personally asked to do so by Ed Parker. For good measure, LeBell refereed the infamous bout between Muhammad Ali and Antonio Inoki a decade later.

That's just the martial arts side of things. LeBell was also a popular pro-wrestler, rubbing shoulders with legends like Gorgeous George, 'Classy' Freddie Blassie and Andre the Giant. He has had yet another career as an actor and stunt man: the list of films in which Gene LeBell has been involved would take up a whole book. He's doubled everyone from Rod Steiger to Hulk Hogan. He's been a regular on television too, with repeated work on well-known shows like the original Adventures of Superman with George Reeves, The Fall Guy and The Dukes of Hazzard.

To top it all off, LeBell comes across as a great guy, humble even after all he's accomplished in his life. There isn't just one foreword of glowing praise: he has two, from 'Rowdy' Roddy Piper and Chuck Norris, followed by an introduction by one of the ghostwriters, a Brazilian jiu jitsu blue belt (at least at the time of writing) called Bob Calhoun.

Refreshingly, LeBell makes no pretence that this book is all his own work. He clearly states who his ghostwriters were on the front of the book and makes a point of thanking them by name at several points in the text. None of those introductions/forewords feel sycophantic: they read like the honest words of good friends, a valuable commodity in which LeBell seems to be very rich, judging by this book. 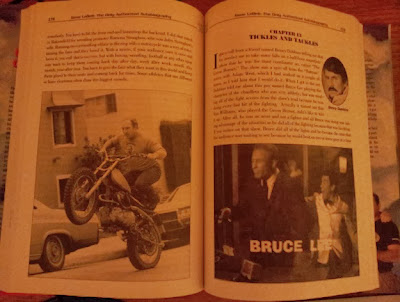 Although there are three ghostwriters and I've never met LeBell (something I'd love to rectify, as he is definitely somebody I'd be extremely keen to interview if I ever get the chance), it feels as though it is his voice throughout the book. Many celebrities biographies have that strained, awkward tone that reveals the obvious hand of a ghostwriter, but that's fortunately far from the case here.

The narrative of The Godfather of Grappling is not entirely linear. Rather, it is a collection of entertaining anecdotes from a man who has led a life sufficiently fascinating fill a book with them (and I have no doubt he's got enough left over for a whole series of books). There are a lot of pictures too, at least one (and often more than one) every few pages, along with colour plates at the back. You also get a partial filmography (which still fills four pages) and a comprehensive index.

To give you a flavour of those anecdotes, here's one of my favourites from p91. LeBell has just described how he headed up a team of American judoka on a tour of Japan, during which they were told they would be promoted if they completed a kata test:

So four of us went down to the Kodokan to learn these katas and be tested on them. Johnny Osako didn't have to go because he was 34 at the time and was considered beyond testing age. Learning all of these katas took some time (about eight hours) and only two of us stuck it out for the full time to learn all of these forms and we both had them nailed. When it was time to be tested, this elderly, Japanese teacher with a big head and even bigger cauliflower ears entered the room.

The Air Force guys all called him "Stink" Sato because he never washed his gi for some reason, but he was the kind of judo man that I had nothing but respect for. We both stood ready for our tests to begin and then the teacher said "Kata's bullshit." That nearly knocked me down as well as any judo throw could have. I didn't even know that he could speak English, but I sure understood what he meant by the word bullshit. "For show only," he continued after that shocking revelation and then he said "Now we fight for degree promotion."

I enjoyed reading about all the many phases of LeBell's life, but my particular interests are Brazilian jiu jitsu and the early history of MMA. LeBell touches on those two topics at numerous points in the book, with the main brief discussion of BJJ appearing on page 76. Interestingly, he keeps referring to MMA events as "get-tough" events, but it isn't pejorative: his respect for MMA - a sport of which he remains a part - is obvious.

The discussion of his treatment by the judo community is intriguing too. LeBell was a judo champion, but was ostracised in the '50s after he became a pro-wrestler. At that time, it was seen as shameful for a judoka to fight for money, the same prejudice that was probably encountered by earlier judo professionals like Mitsuyo Maeda and LeBell's contemporary, Masahiko Kimura.

A few of the anecdotes may be a bit violent for some readers, such as the one about a motorcycle stuntman sadistically blocking LeBell in such a way that it threw LeBell off his seat and his bike went into the air. That bike landed on top of him, breaking several ribs, then he and his bike tumbled down the hill with blood pouring from LeBell's mouth and nose. Practical jokes are one thing (there are whole chapters of them in The Godfather of Grappling, especially the 'swerves' of pro-wrestlers), but that stood out to me as a little more extreme. Having said that, there's a good reason why LeBell is often referred to as "The Toughest Man Alive".

[Note: The Toughest Man Alive also happens to be the title of another Gene LeBell biography, also ghostwritten by Bob Calhoun. However, according to Calhoun (as he relates here), this was illegally published without LeBell's permission. Neither Calhoun nor LeBell have seen a penny from that ill-fated first attempt. The Godfather Of Grappling was a revised draft published shortly afterwards, with LeBell's full involvement and approval.]

As the book was published in 2004, it doesn't discuss some of later developments that would be of interest to people who enjoy reading about BJJ and MMA. LeBell refers to Gokor Chivichyan as his 'top student' numerous times, who went on to found the Hayastan school with LeBell. There is a discussion of how that came about on p236, but 2004 was too early to go into detail on the MMA fighter who is now LeBell and Gokor's most famous student: Ronda Rousey.

Hopefully there will be an updated version of the book some day. For now, you can read LeBell's thoughts regarding Rousey on various sites around the net. He's also got more stories on his own website, GeneLeBell.com. To finish off, here's a stylish video commenting on Gene LeBell generally and his seminal proto-MMA fight with Milo Savage specifically:

There's also a decent and recent interview (starts about 12 minutes in) with LeBell from something I don't normally listen to, the Joe Rogan Experience. That show is normally too rambling for my taste, but this episode was focused and interesting. It's even better if you've just finished reading The Godfather of Grappling, which is available here in the US (or here, in the UK, where I bought it from), or from LeBell's site.
slideyfoot at 22:01
Share