To transition from side control to mount, start by killing the near arm. When you're underneath, one of the worst things that can happen is they control your near arm. Now that you're on top, that is therefore exactly what you want. Start by digging your knee in to get it into the armpit: Saulo suggests faking a choke to get them to raise their arm. You want to slip your knee right under their arm, bringing your knees in close to their head.

Another thing to try is switching your hips into a scarf hold position to pry their elbow up, then switch back to a more orthodox side control to trap their arm. If you are having trouble, dragging your hip along the floor and into their elbow may enable you to scoop up their arm. However you mange it, getting the near elbow out of the way is key to this particular method of transitioning to mount. Once it's secure, you've got several methods for getting to the mount.

My preference is to use reverse scarf hold to go to mount. From tight side control, having killed the near arm, switch one arm to grip their far arm, putting your other hand by their near hip. Shift your hips right back towards their head, as far as you can. Your elbow will either be in their far armpit or wrapped underneath their far arm for control. This position means you're also blocking their view with your entire body. Lean into them, using your body weight to help maintain control. 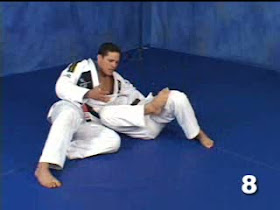 That therefore stops them from seeing exactly what you're doing (note that when Saulo shows it on his DVD, he suggests you mess with them by slapping their legs, until you can pick your moment). When you've got up really high and are ready to go (at this point, they should almost be bridging to relieve the pressure), grab their knee to stop them snatching mount, then bring your leg across. Ideally, you'll pin their knee to the mat, squashing both their knees together.

If you're able to clamp their knees onto the near side, there is the possibility of inserting your foot behind their knees and switching through to mount. However, it generally isn't going to be easy to get them into that position, so I wouldn't rely on this, but still, if you can get it that's an easy route to mount. Second, you can grab your own foot and pull it across, or just squeeze it past your own arm, depending on your flexibility. This is useful when you have limited space, but personally I find it feels a little awkward, in that you might tangle yourself up in your own limbs.

Beginners will often try to simply swing their leg over, which is instinctive. However, while that can sometimes work, especially if you time it well, there are two main dangers. The first is that they will snatch half guard as your leg swings over, as it will normally be within range of their own legs. The second is even more dangerous. If they bridge into you midway through your swing, they can roll you onto your back and end up in your guard.

The safest option is to slide your knee across their belt line, then 'fishtail' (slapping the mat with the side of your lower leg) when your knee touches the mat. You can also grab their belt or cup their far hip to stop them shrimping midway through. I feel this is the best method, using steady pressure to get into place, rather than relying on explosive power, flexibility or luck.
_____________________

Teaching Notes: I went into quite a lot of detail tonight. I think it's good to give plenty of pointers, but there is a balance. It was a bit extended by answering questions, which was hopefully useful. It's always good to have students who want to delve into technique, something I especially noticed tonight. That fits well with my teaching style and my own learning preferences, though at the same time you want to make sure you're catering to everybody's needs.

As ever, it was also useful for me. Teaching tonight made me think more about control points, based off my favourite theoretical framework which John discussed in Texas. From the reverse scarf hold position, you end up using the point of your hip to drive your weight into their near armpit, helping to secure that shoulder. You elbow over to the other side of their head helps with that control point, while the armpit of that arm puts some of your weight into their far shoulder.

When getting the knee across, the control points in the line of their hip become important. I'm not sure if it is best to grab the far hip and block their knees coming in that way, or to grab their legs instead. I think I prefer grabbing their far hip, as that way I can block their movement in that direction as well, especially if I'm reaching right across. Putting my arm by their far hip is another possibility, but I wouldn't want to risk too much weight going into the mat rather than into them.
slideyfoot at 20:30
Share