This is a technique I've used many times, I've learned it from several instructors, I've studied DVDs, I've had private lessons on it before and I've taught lessons on it myself. However, I've never had a private lesson on the running escape with my black belt instructor, Kev Capel. I was therefore looking forward to the tweaks he could add, hopefully enabling me to finally break through some of my problems with that technique.

My biggest problem, a long-term issue I've mentioned frequently over the years on this blog, is that I stall in what Saulo calls the running escape 'survival posture'. I'm aware of the escape from there, having taught both Saulo's original turn to guard and hip swing in multiple lessons, but I am still failing to do it enough myself. Dónal's tips in my previous private lesson on the topic helped, where he recommend shoving with your elbow and arm to make space before the swing, but my technique remains inefficient and overly passive.

More practice is one obvious solution: since late last year I haven't been getting as much sparring time as I would like, though now that Artemis BJJ is up and running, I'm at least getting regular training again. That should improve further once we open up our second location in a month or two. In preparation for this lesson, I re-read my old notes and had a look at some more videos. Jason Scully has a quite different version on the Grapplers Guide, which has really expanded its video content since I reviewed it way back in 2008. Scully has one video on the running escape that particularly caught my attention, as it deals with the common situation that they have got their arm past your hip. This is something Jeff Rockwell covered during his lesson on the technique too, but Scully's variation is one I haven't seen before.

The main difference is how Scully uses his elbows against the person on top. He digs one into their armpit, so that the point of the elbow is poking out, the other elbow in a parallel position on the other side. With that elbow in place, Scully can pop free, pressuring them downwards, putting him in position to attack the turtle. That's an option I intend to play with in the future and mentioned briefly to Kev in this private, but more important is building on what I already know.

On that score, Kev provided me with some excellent tips. From the standard running escape survival position, Kev noted firstly that you must keep in mind it is a bad position to be in: from his perspective, that's actually where he wants you to be during his leg drag pass. Still, if you can prevent them securing a good grip with their arms and trapping your legs with their knee, you have a number of escapes from here.

That begins with the leg swing escape I normally do (and should be doing more often). Make some space by shoving them with your elbow, then push off your feet to fire your hips into them as well, swinging your legs through to establish guard. This is ideal for when their weight is high on your body. If their weight is low, then you won't have the space to get your hips up.

However, to get their weight lower on your body, it is likely that one of their legs will be in range for your next escape, empty half (among Eddie Bravo's least silly bits of terminology). In the running escape, I raise the knee of the leg I've stepped over. With that same leg, reach back and hook their leg: this should be especially easy to do if they are looking for that leg drag and therefore have their leg close to yours. Hook and pull it towards you, switching it to your bottom leg once it becomes feasible. You can then transition into butterfly guard and may even be able to go right into a sweep.

If that fails, it will probably mean they have moved up your body to avoid their leg getting trapped. To do so will hopefully leave enough space to return to the previous escape, swinging your legs and hips. Be ready to make that transition if the empty half moves out of reach. Yet another option is to go for their arm instead, which will be looking to get past your hip.

Grabbing the sleeve of that arm and stiff-arming it away from you is a surprisingly powerful control. This works when escaping the back too, as they will find it tough to maintain control if that arm is stuck out away from their body like that. You can use that grip as leverage to recover guard, or in a similar motion to the stiff arm escape I've discussed before, except it is on the far arm rather than the one near your head. Should they manage to bend their arm, you still have the option of Beneville's 'shin in elbow' trick from Strategic Guard. Pressing your knee into the crook of their trapped arm can act as another leverage point to walk your way back into guard.

A more unorthodox approach, which Kev has been taught by Roger in the past, is to wrap your arm around the outside of your leg. Doing this to both legs makes it more difficult that you'd expect for them to pass, as they are almost certainly going to put their arms in range to be gripped. Finally on side control, Kev uses a simple escape for when they are moving to north-south, so essentially it's a transitional side control escape. As soon as you feel them moving around and putting their arm by your hip, bridge and turn in the direction of your hip bracing arm.

This is from the usual side control bottom frame of an arm into the neck and the other by the hip. If they are moving towards your head, that arm into the hip ends up taking a bit of weight. Nevertheless, you shouldn't need to shove to get this turn. It feels very smooth when you practice it, turning and then slipping that hip bracing arm down and around their leg or back. You can then move directly into the usual side control escape to your knees, grabbing their far knee and moving into side control top yourself. 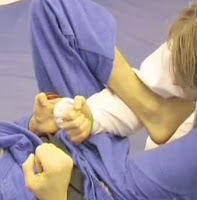 We finished off the private lesson with a couple of techniques from my favoured lasso spider guard, as I mentioned that's somewhere else I often stall. Although I'm aware of the basic sweep where you bait them to try and pass to the opposite side of the lasso and roll them over, I rarely land it. I tend to look for a tripod/sickle sweep combination when they stand up. However, if they are on their knees I don't have a go-to option: thanks to Kev, now I do.

Start off with the classic option of kicking your leg up into their non-lassoed bicep, looking to knock them over. To resist they will probably stand up. From here, if you're not going for that tripod/sickle combination, unwrap the lasso and put that foot on the floor between their legs. Kick the other leg up in their bicep and pull on both their arms, with the intention of making them take a big step forward. That should put their legs in range of your arms: wrap them both up tightly. Put one foot into their hip (or just use your calf on their thigh), the other pressing into their other leg.

From here you can knock them backwards like the double ankle sweep, then come up into a straight footlock (you already have your arm in position to attack their achilles tendon) or pass. I would most likely opt for the pass as I remain uncomfortable with leg locks (mainly because it seems too easy for the other person to injure themselves if they try to explode free in the wrong direction, plus it often seems to leave my foot in an equally vulnerable position), but I should probably get comfortable with at least the 'safer' options like a straight ankle lock. There is a bicep slicer from the lasso grip too, which makes me uncomfortable for the same reason, especially as it is mainly pain compliance.

Another sweep option from the lasso spider guard also involves tempting them to stand up, but this time you keep the lasso. I initially thought it looked complicated (as any long-time reader of this blog will know, I find anything complex off-putting), but the application is fairly simple. I never use x-guard (my own personal hang-up about only focusing on techniques that feel mechanically simple), but this version made sense. Put the foot of your lasso leg behind their same side knee, then bring your other leg in front of their ankle. From that position, you can roll them over and pass.

We did a brief spar at the end (there was some light specific sparring in side control to work on those escapes, which was useful). Just like the last time I sparred Kev, he totally dominated with his grips on my legs by grabbing near the ankles. I struggled to do anything from there (not that I was expecting to, given Kev is not just a black belt, but the 2014 European Champion in his division), so I need to remember to be more vigilant about breaking grips.

Next time I'll think a bit more carefully about timing the theme of the private lesson with the position of the month at Artemis BJJ. Guard attacks and the running escape were two of the big topics I wanted to cover, but now I can match up the private with whatever position is being covered in Bristol the rest of the month. I'll most likely head up again in April, when we'll be looking at the back at Artemis BJJ. I still want to do more work on back escapes, which will fit nicely (and follows on from the running escape, as if I mess up I'll often then need to escape the back).
slideyfoot at 21:30
Share