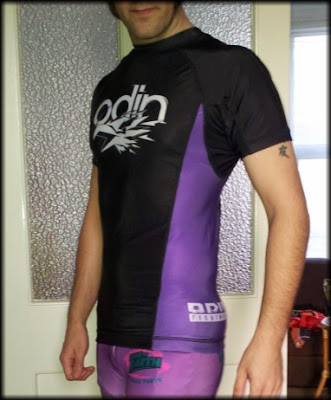 Short Review: For those who prefer a plainer look, Danish company Odin Fightwear offer simple designs with a Norse twist. These rashguards also feature an anti-slip waistband and a modified cut for the armpit that avoids tightness in that area. You can choose from the Berserkur (in either brown/black or blue/grey) or the IBJJF legal ranked rashguard, which has a swoop of colour to fit the regulations for that particular tournament provider. Available to buy here, setting you back 32€ for the Berserkur and 34€ for the plainer ranked rashguard, but be aware that the sales tax to the EU bumps it up to 40€/42€, which is an unfortunate barrier to sales in that nearby market.

Full Review: Odin Fightwear was founded in Denmark during 2011 by Kári Gunnarsson, who is currently a brown belt at BJJ Globetrotter Christian Graugart's gym in Copenhagen. There is a vibrant jiu jitsu scene in Scandinavia, with some stand-out MMA fighters emerging from the region as well, such as Iceland's Gunnar Nelson and Sweden's Alexander Gustaffson. That means Odin Fightwear has a considerable local market, but they are gradually expanding to the rest of the world. 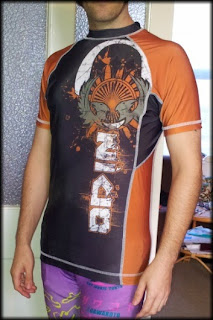 I've always been a big fan of mythology, especially Norse, as that's one of the coolest (trolls, dwarves, Thor: what's not to like?). My first encounter was probably a large book of Norse legends I borrowed off a friend when I was a child, then further down the line a couple of brilliant computer games in the early '90s, Heimdall and Heimdall II. Myth was another entertaining attempt to create something interactive from a whole range of myths (I didn't realise it was from '89: for some reason I thought it was later than Heimdall), then more recently games like Age of Mythology (though I guess it isn't that recent now: I haven't been seriously into computer games for well over a decade).

With a mythology that rich in brilliant imagery, you would expect that a brand calling itself Odin Fightwear would be releasing all kinds of awesome designs featuring mighty hammers, axe wielding vikings and rampaging frost giants. Instead, Odin have gone for an understated look: the link to Norse mythology is more through the Scandinavian location and some of the product names rather than a love of spectacular viking imagery. On the 'about us' page, it states:

The main goal of the company is to provide MMA/Grappling/BJJ gear of the highest quality, and just as importantly, with crisp/fresh designs. We don’t feel that the majority of MMA brands out there appeal to us, as we are not attracted to the “in your face” style that most companies seem to cultivate, so we aim to create crisp cool designs (though not necesarily minimalistic). We take our inspiration more from surf clothing than from other MMA brands, and try to incorporate that design feeling into clothing that is meant to withstand MMA/Grappling rather than surfing. 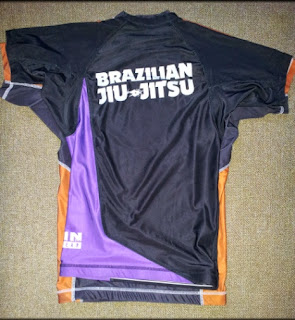 That can certainly be seen in the two rashguards I was sent, especially the IBJJF legal belt colour rashguard. It is almost completely devoid of illustration, except for a stylised raven in the logotype on the front, with 'Brazilian Jiu Jitsu' written on the back. There is a swoop of rank colour (in my case purple) down one side that curves around the back, fitting the IBJJF regulations on nogi equipment.

Of course, there are lots of other tournament providers besides the IBJJF, as despite what the IBJJF would like people to believe, they're just a company not a governing body. Still, they are the largest tournament company, so quite a few fightwear brands are providing specific IBJJF legal rashguards. I've got another one from Fenom, which has a comparably simplistic design. This is the relevant IBJJF rule, 8.1.13, on p29 of the rulebook: 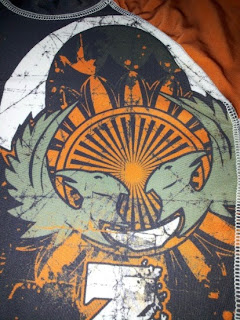 The Berserkur rashguard is more intricate, because it doesn't stick to those regulations, though it's still far from flashy. The name is also considerably more interesting: for those of you unfamiliar with the term, 'Berserkur' is itself an overt nod to Norse mythology. What English speakers would call 'berserkers' were viking warriors who intentionally went into a battle-frenzy, chewing on their shields and fighting without armour. Appropriately, they were associated specifically with Odin. 'Berserkur' literally translates to 'bear shirt', which from what I've read is both a reference to wearing the pelt of a bear and the belief that berserkers could actually change their shape into an animal. There is a connection here to the legends surrounding werewolves (or to use the posh term, lycanthrope), as a similar group of warriors called the Úlfhéðnar wore wolf-pelts.

Instead of bears or wolves, the main theme on the Berserkur rashguard is again ravens. Two of them face in either direction on top of what looks like a sort of shield girlded with feathers. The raven is a common attribute of Odin, who has two of them, Huginn and Muninn (the latter has his own pair of Odin Fightwear shorts). Their names translate as 'thought' and 'memory' respectively. The ravens are essentially Odin's eyes on the world (which is handy, as he only has one of his own, having used the other to pay Mimir for a drink of wisdom), flying out each day then returning at dinner to fill him in on the latest Midgard news.

White text spelling out 'Odin' (in a suitably chunky Norse font) extends down from that illustration on the left chest. The middle of the rashguard is black (it says dark brown on the website, but certainly looks black to me, unless I misunderstood the text), while the side panels and arms are a light brown. That colour is broken up by a black strip under the armpits. You can also buy the Berserkur in a light blue, which instead of black has a light grey middle and armpit strips. 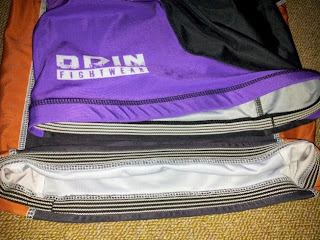 The material feels a bit more waxy (for want of a better word) than most of the other rashguards and spats I own, although the spats I reviewed recently from Combat Skin are a similar texture. As with the Combat Warrior spats, I'm not sure if that is simply a matter of texture or that the material is in fact thicker. It looks and feels durable, but obviously only time will tell if that is a correct assumption on my part.

I've been alternating between the two rashguards for the last month and found them similarly comfortable, despite them being different sizes. The label at the neck is printed onto the material, which is good as I always find those white flaps of label irritatingly scratchy. As is now standard with rashguards, the graphics are sublimited so they won't peel, crack or fade. The stitching is flatlock, again standard for modern rashguards.

Both the Berserkur and the ranked rashguard have an anti-slip waistband around the bottom, similar to the one in the rashguard I was kindly lent by Conor back when I attended the Rolles Gracie Jr seminar with him in Houston. The idea is that this stops the rashguard riding up. It feels quite bulky, as unlike the rest of the rashguard it is stiff and solid. There is also a tendency for the waistband to fold over on itself, but that could well be because I wear it under my gi jacket and trousers. Unlike the anti-slip waistband I've experienced on spats, it isn't especially tight, depending on how far down your body you pull it. 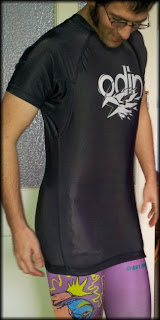 Unstretched, the Berserkur is 68cm from shoulder to hem and 39cm across the width of the waistband, but as you can see from the picture, there is a lot of vertical stretch. The ranked rashguard is 62cm shoulder to hem and 38cm across the waistband. Again, that stretches just as much as the Berserkur. The Berserkur I was sent is a Medium, so if I don't pull it down firmly there is some bagginess around the chest area. The ranked rashguard is a Small, which unsurprisingly felt tighter and is slightly shorter. However, both fit comfortably on my 5'7" and 66kg frame.

At the moment, you can only get short sleeve rashguards from Odin Fightwear. That is advantageous in hotter weather, but I prefer long sleeve due to the protection from friction for the elbows, useful with or without a gi. The neckline is high like on a surfing rashguard, similar to my Fenom. Looking through my rashguards that high neck is common to most of them, with the Gentle Chief being slightly lower. 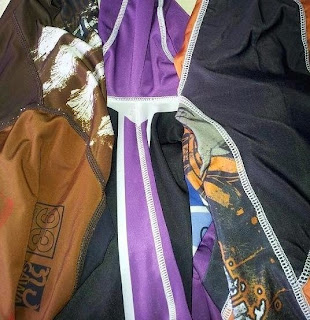 If you lift up the sleeve of the Odin Fightwear rashguards, you'll notice that they are cut rather differently to most other rashguards. The stitching does not go across your armpit, instead there is an extra panel there (hence the black strip). It looks more like the crotch area of a pair of gi trousers, so there isn't anything that cuts into your armpit. Personally I'm quite skinny so this isn't much of an issue for me anyway, but if you've had any issues with discomfort in the armpit area from other rashguards, Odin could be the solution you're looking for. It's always good to see companies try something new, especially when it appears to be an eminently practical innovation.

The rashguards are available to buy here: it's 32€ for the Berserkur and 34€ for the plainer ranked rashguard. Unfortunately in what would otherwise be the obvious European market, Odin Fightwear are a little hampered by Danish sales taxes to the EU: that bumps up the price of their rashguards from 32/34€ to 40/42€. I'm not sure if the sales tax applies to other countries like the US, but it looks like it doesn't according to this.

Update April 2014: Gunnarsson put up the following explanation of sales tax on the Odin Fightwear Facebook page, stating "this is no different from any Business->Consumer sale within the European Union, there must always be sales tax (VAT) added. We have simply chosen to show the price with, and without the VAT, in order to make it easy for our US (and other non-EU customers) to see what their price is (since non-EU residents will not be charged the VAT). So we are not charging any extra tax that others do not, we simply show the price both with and without VAT, while most stores only show the price with VAT."
slideyfoot at 12:00
Share