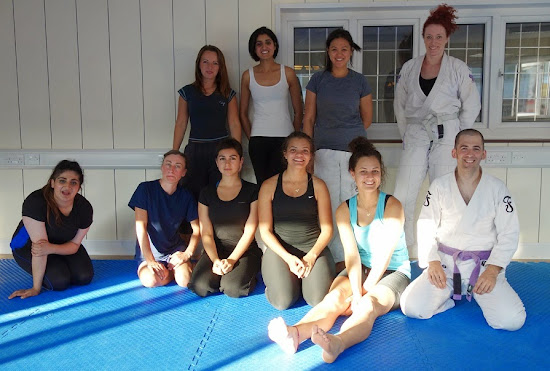 Encouraging more women into BJJ has been a major goal of mine for many years, so I'm really pleased to get the chance to do something about it. We're going to be running women's classes at Artemis BJJ every Wednesday from 18:30-19:30 at Bristol Sports Centre, completely free until at least the end of this year. Of course, the class isn't truly women-only yet because I'm the one teaching it. I'd like to rectify that in future, once there is a woman at the club who is interested in teaching, but I'm happy to head up the classes until that happens. :)

I thought carefully about what to teach, eventually deciding that a basic mount escape would be the way to go. That's what I've taught at women's classes before and it's also the first lesson in the Gracie Combatives syllabus (a course which has its flaws, mainly the online grading, but as a curriculum it is well structured). Not coincidentally, it's the first lesson BJJ pioneer Rorion Gracie would teach back in the beginnings of international BJJ. I went for that same technique when I taught what is essentially my first women's class, over at Aro Ling almost exactly two years ago. Handily, that means I can copy and paste chunks from my previous entry on the topic. ;)

So like last time, I'll start this post by discussing Rorion Gracie's seminal intro lesson in a little more detail. Rorion is largely responsible for expanding Brazilian jiu jitsu outside of his native Brazil. In the late '70s, he travelled to the US for a second time, with the intention of establishing BJJ in North America.

Initially he found work as an extra in Hollywood, while teaching BJJ out of his garage. Thanks to those connections, over the years Rorion was able to encourage actors, directors and writers to come train with him. Around 1990, Ed O'Neill had a part in a popular sitcom, Married With Children: his acting friends had been pestering him to give the Gracie Academy a go. To shut them up, O’Neill reluctantly agreed to try it out. Rorion, who has always had a knack for marketing, offered O'Neill a simple challenge. If Rorion sat on top of him, could O'Neill throw the much smaller Brazilian off?

O'Neill decided to accept: as a big guy, he reasonably thought it should be easy. However, try as he might, O'Neill couldn't budge Rorion from his position. Smiling, Rorion then suggested that perhaps O'Neill might find it easier to hold Rorion down. After the demonstration O'Neill had just felt, he felt that surely he would be able to use his size advantage to stay in place for at least a few seconds. However, again Rorion surprised him, with a quick reversal. O'Neill was hooked, and over a decade later, he earned his black belt. He tells the story himself in this video. 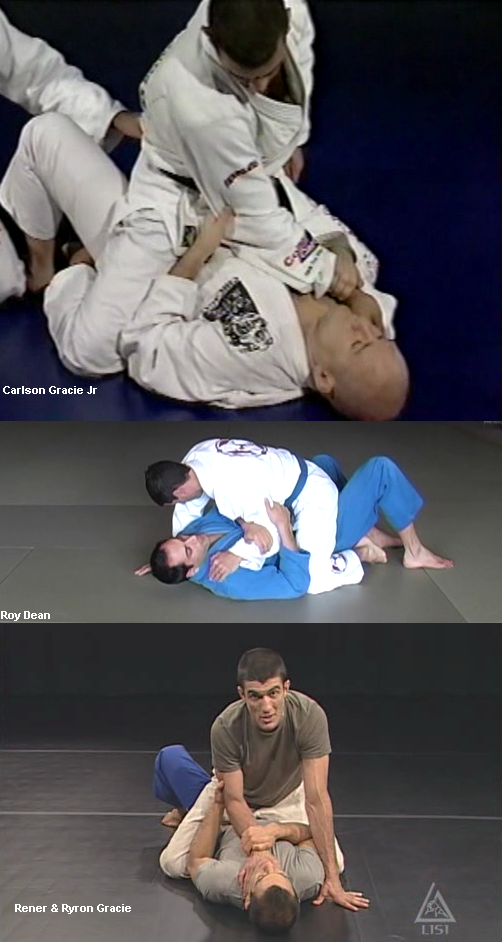 For what's called the upa escape from the mount ('trap and roll' is another common term), a typical starting point would be when they try to establish their first grip on your collar (or your neck, if you aren't wearing a gi) for a choke. That provides you with a chance to trap their arm. The usual grip would be to grab their wrist with your opposite hand, then just above their elbow with your other hand. This is the preferred grip on Gracie Combatives. The reasoning is that this grip prevents your opponent from drawing back their arm for a punch.

There are various other possibilities, such as the option I first learned, which was gripping their wrist with your same side hand, then grabbing the crook of their elbow with your opposite hand. That has the advantage of helping you wedge your elbow and arm into their chest, which provides additional leverage when rolling them over. Having said that, you can still use your elbow with the Gracie Combatives grip, it's just slightly less effective as your arm starts further away from their torso.

Whatever grip you choose, you then need to trap their leg on that same side. Otherwise, they will be able to use their leg for base as you attempt to roll them. In order to prevent that, step your same side foot over their lower leg, hooking it in tightly to your bum. This means they are now like a chair with two of its legs missing. If you feel your control is too loose, slide your foot further across towards the other side of your bum, which should eat up some more space.

Even if they can't post with their leg, they might be able to use their knee, so you want to have their leg as tightly locked to your body as possible. Also, be careful that you don't end up hooking both their feet, or leave your other leg in range of their hook. It is possible for the person on top to defend the escape by securing a hook with their free leg by your non-trapping leg. Therefore, try to keep the leg they might be able to control out of range.

A common problem is that you're having trouble trapping their foot, because it is too high up. If that happens, try using your elbow (or even your hand, if you need more reach, but that could leave your neck vulnerable) to shove their knee backwards, until their lower leg is in range. This is an advantage of the Gracie Combatives grip, as putting a hand behind their triceps puts your elbow in a good position for shoving back their knee.

Yet another option, if their arm is not in range, is to bridge enough to bump them forward, jamming your knee into them if you want more leverage. That should mean they are forced to post out their hands for balance, a difficult instinct to ignore. That puts their arm within reach. You can then wrap both of your arms around one of theirs, gable gripping your hands (palm to palm). Suck that arm into your chest, clamping it at the elbow.

To finish, you're going to bridge towards that trapped side. As with basic side control escapes, get your heels close to your bum first for maximum leverage. Bridge up and over your shoulder, turning to your knees: this puts you inside their guard. Make sure that you're bridging over your shoulder and not simply rolling over to your side. If you don't raise your hips properly, you may merely give up your back.

If you find you need more leverage, most commonly if they are posting with their free hand to stop your roll, you could attempt to dislodge that by pushing their arm off the ground. Alternatively, the legendary Rickson Gracie has a great detail, which he demonstrated in a video recently. Simply angle your head away from the shoulder you're rolling over: this increases your range of motion.

When you've successfully rolled them over, that puts you in the guard position. Remember to posture up when you reach that position: if you are leaning forwards, they can pull you down move right into a submission.

Teaching Notes: I was really happy about the turnout, which is the best I've ever had for a women's class. In total, ten women headed over to Bristol Sports Centre to give BJJ a try, as you can see in the picture at the top: the tenth woman, my girlfriend, was being photographer. That meant I had a picture for the Artemis BJJ Facebook page, as well as for my blog, the main Artemis BJJ website, etc. :)

Having my girlfriend there was extremely useful. I've mentioned in the past that I always look for feedback, but it can be tough to get. Part of that is because people are nice, so they can find it hard to be critical. However, when you've been in a relationship with somebody for almost fourteen years, honest criticism tends not to be a problem. My girlfriend had loads of good advice and was helpful both before, during and after the lesson.

The first thing I would change next time is the timings. Normally I would have people spend four minutes each drilling the techniques. However, I think for this class, shortening that time would make sense, maybe to two or three minutes. So, I think next time I could comfortably fit in a bit more technique within the hour.

For example, you can still trap and and roll if they bring an arm under your head: simply reach back as if you were combing your hair to trap their arm, then progress as before. Generally when I do this, I like to be able to drive my elbow into their hip and stomach, as I find that helps with leverage. Rener prefers to put his hand right into their hip, at least when he teaches this technique on Gracie Combatives.

The Rickson detail was handy, as that meant I had a good pointer up my sleeve for progressive resistance. Watching the drilling, I think I need to put more emphasis on turning to the knees. I did mention it during the demonstration, but it would have been better if I also added in a drill at the start. As I already talked too much, turning explanation into drilling makes a lot more sense. That's a good general principle I should apply more going forward.

The drills I did include at the start were bridging, then bridging side to side. Next time, I add to that side to side bridge with a turn to the knees, basing on your shoulder and foot. A few people arrived a little late (understandable, as this is a fairly early class at 18:30, so with traffic etc I can imagine getting there from work isn't always easy. I'd much, much rather people come in late than not come at all!), so I recapped what I'd shown. I probably won't do that next time, instead showing it to people when we get to drilling. That would probably help the class flow better.

I wasn't sure if I was going to include sparring or not, but as there were two experienced women there, that gave me the opportunity to ask if they wanted to spar. If it's a similar situation next time, I will make sure I ask people before I do this, because it ended up with two women sparring and everyone else watching. Although they both said it was fine afterwards, I know I'd feel a bit under pressure in their place. So, I'll be sure to check in advance next time, but it did work. After watching the experienced women spar, as I'd hoped that encouraged the beginners to give it a try.

Most important of all, everybody looked like they were having a good time. If I can get people smiling and laughing, that is the best result I could hope for from a class. Lots of people will tell you BJJ is about self defence, about competing, about whatever: above all of that, it should be fun! :D

Finally, I put together a short questionnaire for people to fill in, so that even if people decide one class was enough, I can at least get some information from them both on what I can do to improve and what kind of reasons they had for trying out the class.
slideyfoot at 19:30
Share