Starting from high mount, keep low, your arm based out, putting your head on the same side to concentrate your weight. Remember to keep your feet tucked under their bum for control. Drive your first grip in, which normally is going to be blocked by their arms crossed over their chest. To work past that, Roger advises that you pull open their collar low on their lapel (or at least lower than their elbows. You don't want to get stuck trying to yank out the collar from directly underneath their tightly crossed arms). You can then slide your arm through. To make that extra-solid, Roger told me to brace your own elbow against your hip. You can then wriggle forwards, driving your arm in front of you with the combined power of your hips, legs and arm. Also form your hand into a wedge, as this will help cut past their blocking arms. 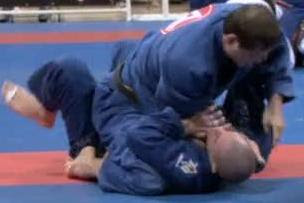 Either way, once you have the grip, lift them up towards you slightly, twisting your hand so that you create a small gap between their neck and collar. Into that gap, insert the thumb of your free hand, to establish your second grip. You can also drop your elbow to the other side, so that you're pressuring into their neck. 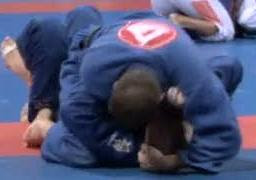 Once you've got the thumb arm into position, so that both carotid arteries are blocked off, move your forehead to the floor directly above their head. Twist your wrists and drop your weight into them to finish the choke. Roy Dean provides a handy pointer here, which is to shift your hips forward slightly, still basing on your head. That will give you a little extra leverage, should you need it.

I also added in my preferred cross choke variation from Michel Verhoeven. After you've inserted your first hand, start to raise your partner towards you slightly. Bring your second arm around to the other side of their head, then 'shave' back across their face to position that arm by their neck. Grab a handful of gi by their shoulder, then drop your elbow so your forearm is over their throat. This second arm doesn't move after that point: the choke comes from twisting the first hand and drawing that first elbow back.
_____________________

Teaching Notes: I am tending to show a variation, which I wasn't doing earlier. I'm not sure if it is better to leave out the variation and keep it focused: I probably should do that, as I think I cut into sparring time a bit due to the variation. Though personally I much prefer the variation, I could just teach that on another day or next time. I have to be careful I don't get bogged down in too much detail, it's something I can add in during drilling.

The main problem people were having was, I think, not getting those grips close enough to the neck. One of the students also said they were struggling if their partner got a hand to defend. I don't advocate crushing through the hand for a choke, so my solution to that would be going for something else. E.g., if you can't get the cross choke without brute force and bone crushing, I'd suggest using the position to move your knees up higher. That could lead to an americana, or just taking the back.
slideyfoot at 20:30
Share