Short Review: The second spats available from Combat Skin draw upon the classic martial arts image of the samurai, with several changes since their last pair of tights. The drawstring has gone (personally I'm glad to see it go, but your preference may vary), as have the anti-slip cuffs on the ankles. That anti-slip waistband is still there, but more comfortable this time around. The spats are also a little longer and wider than before (at least in Medium), making them a slightly better fit on my 5'7 and 66kg frame. Available to buy for $59 here.

Full Review: Since launching in November 2013, Combat Skin has continued to expand. I previously had the opportunity to try out their Combat Warrior spats, part of owner Steven Loi's inaugural market offering. That featured a design by Meerkatsu, replicated across a number of different BJJ fightwear products. The latest design I've been able to test, the 'Samurai in Combat' spats, has received similar treatment. Just like Meerkatsu's artwork, the Samurai in Combat appears on a t-shirt, rash guard and even a gi patch, as well as a gi.

It is not a new design: those samurai had already been revealed when I wrote my last review in March, although at that time it was being sold on a t-shirt. Notably, those sales had a charitable element. 20% of profits went to Bulig Isko, an organisation connected to disaster relief after the Haiyan Typhoon in the Phillipines. That's part of Combat Skin's stated aim of 'giving back to the community'. They've continued to back up that part of their mission statement, not just with various sponsored athletes, but helping out community projects and events too.

For example, Combat Skin provided the t-shirts for Jodie Bear's GrappleThon held in August, where she raised money to support the Donna Louise Trust. Jodie is herself now a sponsored athlete: you can check out her (slightly out of date, as she's since earned her blue belt) page on the Combat Skin website here.

Another part of the mission statement regarded using artists that train, something in evidence with the Samurai in Combat design. The two samurai that feature on these Combat Skin spats were created by Jay Acosta, who is based in the Philippines. He is also known as 'JayBhoi', the name under which you'll find his work on sites like deviantART and behance.net. His artwork on the left leg features a pair of samurai in full battle-dress, one wearing red armour while the other is in blue (there is a clearer picture of the design over on his Facebook page).

Drawing on Japanese tropes is a good move for a piece of BJJ fightwear. Anything Japanese is especially popular in martial art circles, from manga to cultural rituals. BJJ's titular Brazilian heritage has counter-acted judo's original stiff formality, although a few schools have poured some starch into the old Brazilian laid-back vibe. Still, although we might not be swishing our hakama skirts, the grapplers of BJJ nevertheless tend to love ninja and samurai just as much as the Japanophiles of a karate or aikido school. That also gives me an excuse to babble about samurai in general. Hooray!

The term 'samurai', which apparently translates as 'those who serve', was first used in a purely military context during the 10th century (according to military historian Stephen Turnbull). Their significance ramped up over the coming centuries: for example, the Gempei War (or Genpei War, depending on how you transliterate from the Japanese) in the 12th century, the rather fortunate repulse of the Mongols in the 13th century (the weather helped quite a bit), the Onin War of the 15th century and the following Period of Warring States, lasting around 150 years.

Tokugawa Ieyasu emerged as the victor of all that warring, after climactic battles at Sekigahara in 1600 and Osaka in 1615. The next two centuries would be remarkably peaceful by comparison to what came before, meaning that the samurai didn't have to do a whole lot of fighting. The

fanatical Christian aspect of the Shimabara Rebellion in 1638 (one of the exceptions when the samurai did need to dust off their armour) triggered Japan's withdrawal from the world, codified in the 1639 Exlusion Edict that banned almost all foreign trade, barring a tiny selection of Dutch merchants based in Dejima. By the time Commodore Perry shattered that arrangement in 1853, the samurai had gone from feared fighters to pen-pushing bureaucrats.

From what I've read, the historical reality of samurai is not particularly elevated, much like the reality of European knights is far less 'chivalrous' than the Arthurian mythos might lead you to believe. Similarly to their European counterparts, samurai started off basically as mercenaries and bodyguards. Bushido was about as relevant to the original samurai as Idylls of the King was on the medieval battlefields of Europe (in other words, not very much). The samurai myth (again, judging by a few books and internet sites, so I could be wrong) was largely a 17th century creation, just when the real samurai were transitioning from a life of constant warfare to a life of political intrigue.

There's an article about myth versus reality over on TheGoldenEggs: I'm not sure how well researched that is as there aren't any footnotes, but it makes for interesting reading. Or have a read of this piece about a scholar of Asian history, which has several intriguing quotes. For example:

Samurai rarely used swords in battle — instead they most often used arrows. So the idea of the sacred Samurai sword isn't exactly accurate. Their weapon of choice was actually the pike, which was essentially a spear. Swords were very expensive, so they weren't used often, which also explains why they survived. [...]

Loyalty has been grossly exaggerated. Warriors were interested in reward and recompense. Conlan found evidence that warriors moved from one side to another depending on the reward they would receive.

Of course, outside of academia it doesn't matter all that much what samurai were actually like. What matters is their status in popular culture. In that context, they're undeniably cool. Whether that's in Kurosawa films and the work he inspired (Star Wars being perhaps the most notable example), Ghost Dog or countless katana-wielding anime warriors, samurai through modern eyes are sleek, graceful and honourable to a fault. The positive image of the samurai as an intensely loyal aesthete with a sword, despite not being borne out by history, also remains powerful, as does their rather better founded status as elite soldiers. One of my own BJJ heroes, Saulo Ribeiro, has proudly described himself as a "samurai of the modern world." So, samurai imagery is an easy sell to BJJers (including me). My knowledge of samurai armour comes mainly from Akira Kurosawa and playing Wizardry (hence why 'ashigaru' is a familiar word to me, as they kept stabbing my characters to death), but Wikipedia has an impressively detailed picture with a complete key of all the parts. Based on that, it looks like JayBhoi has kitted his samurai out with ō-yoroi ('great armour'), rather than the later more mobile dō-maru. That also means I've now learned a new word: I'm a fantasy and history geek so I love armour and weapons, but 'poleyn' isn't something I've read before. Apparently that's the bit that covered the upper leg through to the knees (4 on the diagram). ;)

JayBhoi's Red Samurai is trying to chop into Blue Samurai with a blood-stained katana. However, Blue Samurai has managed to overcome him through - of course - jiu jitsu (I somehow doubt BJJ would help you against a great big sword in real life, but it's a cool concept for BJJ fightwear). The difference in armour tone is a satisfying touch, as it makes Blue Samurai's triangle-armbar attack much clearer.

The main body of the spats is a rich blue, setting off the red stitching that continues the colour scheme of the samurai. That blue background contains a blown-up watermark of the samurai design, extending across the entire surface of the spats. Directly behind the two combatants there is a large oriental dragon, mouth agape and claws raised. She looks partially armoured herself, further enhancing the samurai theme. The ethereal light blue colour presumably indicates that this dragon represents the fighting spirit of the samurai. On a personal note, it fits pretty well with some of Jodie's own dragon artwork, which she tattooed on my left foot a few months ago. ;)

At the bottom of the left leg, Acosta's personal logo (a quizzical stylised head, atop a plate with 'JAYBHOI' written across it) stares out. On the right leg, 'Combat Skin' is written down its length in large white letters. The 'CS' logo sits at the top of the leg, looking like it has just been sliced in half. The waistband of the spats has 'Comabt SKin' written all along it, separated again by that CS logo (untouched by a sword this time).

Acosta's artwork has the standard sublimation to prevent cracking, peeling and fading, while the spats have the equally standard flatlock stitching for comfort. The tags are sublimated too, greatly preferable to those irrtating flaps you get in most clothes. Combat Skin have also helpfully pre-washed the tights, so you shouldn't have to worry about the various chemicals from the manufacturing process that can linger in new clothes.

There have been a number of changes compared to the Combat Warrior spats. The Samurai in Combat do not have that 'waxy' sheen, presumably because instead of 80% polyester and 20% lycra, they are 82% polyester and 18% spandex (the same blend as the Mashuu 2.0 from Strike). The dimensions for 'Medium' have changed as well: the Samurai in Combat is noticeably longer than its predecessor. They remain a good length for my 5'7 and 66kg frame, because I prefer spats to extend to my ankles. They are 93cm rather than 85cm (unstretched), while the width is 34cm, compared to the Combat Warrior's 31cm (measuring it flat on the floor on one side, again unstretched). Overall I'd say these are an improved fit compared to the Combat Warrior, which was already among my best fitting spats. 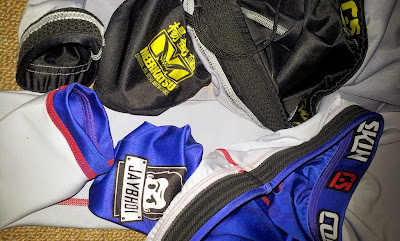 Those Combat Warrior anti-slip bands on the ankle cuffs have gone, with added reinforcement: the Samurai in Combat has three lines of stitching on the cuffs compared to the Combat Warrior's two. The drawstring has gone as well. There is still an anti-slip waistband on the Samurai in Combat, but it's more comfortable than on the Combat Warrior. As you can see if you click on the picture, the pattern of stitching on that waistband is different too. For me that again is an enhancement. Drawstrings have been superfluous in my experience with spats so far, though if the elastic loosens over the years, the Combat Warrior drawstring will have renewed purpose.

The Combat Warrior spats arrived in a small plastic pouch. This has been upgraded to a mesh bag for the Samurai in Combat, with a toggle drawstring. That's perfect for wet clothes you want to compress, so I'm currently using the bag for my old travel towel. The Samurai in Combat spats are available to buy from the Combat Skin website for $59, here.
slideyfoot at 11:27
Share