After arriving back from Madrid around midnight, I got in a few hours of sleep before jumping on a train down from Bristol to Bournemouth. That was for the inaugural UK BJJ Globetrotters Camp, held at the Phoenix MMA gym. It's a short and straightforward cycle from the train station, though as it's also on a high street, I imagine there are plenty of buses running through there.

In terms of accessibility, Phoenix MMA is fairly convenient for those of us in the South West. The train is about three hours from Bristol, or you can drive there in around two and a half. Due to it's prominent location, the gym is easy to find. It's a decent size for a BJJ school, with two rooms (one was a lot cooler than the other in the unseasonable heat today), though naturally much smaller than the Sportoase in Leuven. The Sportoase is HUGE.

The main downside of the UK venue is there's only one shower and one toilet (for the men at least, the women's changing room might be more spacious). I was only able to make it to camp for the Monday this year, but if I can stay longer in 2017, I'll try to get accommodation somewhere near enough to the gym that I can pop out for a shower. ;)

It's been a long time since I last saw today's first instructor, Lorenzo. He was there when I first started at the Roger Gracie Academy in 2006, but I don't think I've seen him since I moved away from London in 2009. In the intervening years, he's earned a black belt and set up his own school, Wave BJJ, as well as becoming a regular instructor on the BJJ Globetrotter camp circuit.

To kick off the camp, Lorenzo taught something more advanced, the barataplata (also called the baratoplata: the guy who invented it seems to use barataplata, so I'll go with that). Fortunately for me, I wasn't completely unfamiliar with the technique, as my instructor Kev Capel had shown a set-up earlier this month. For the first variation, Lorenzo started from north south, moving into a kimura. He then locks the second arm (which was grabbing his own wrist) to his chest, meaning he has his first arm free. If you were wearing a gi you could grab that, but as this was nogi, the hand was just on the chest, clamping tight.

You can then pull their legs across to prevent them blocking. I'm not sure that's always essential, as I'd rather maintain the kimura grip, but depends what they do with their legs. Also, the assumption here is that they have their hands locking together. If they let go, you could switch into an armbar. 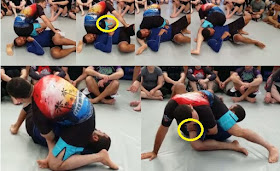 If you still have their arm and it's bent, swing your leg over, so it is across their kimuraed arm. Bring your arm through so it is grabbing your own thigh. Base your other arm out on the mat, then slowly turn your hips towards their head, keeping your other leg braced against the back of their head.

Should they turn to their knees putting your back on the mat, you can still finish this. Push on their near knee, then untriangle your legs. Come up on your elbow, then bring the leg which was nearest their head over and towards their legs. Get that foot to the mat. Keep turning, until you've knocked your partner to their back. You can then turn your hips again to finish, as you end up in the same place as before.

The last technique was the same one Kev showed, from that double underhooks defence position. See my earlier post for that one.