I used to really enjoy Chiu's classes back when I trained at GB Brum in 2010, so it was cool to get to train under him again. Especially as today, he picked side control escapes from a position similar to the running escape: perfect. :)

Chiu called his class 'foetal side control escapes', which makes sense after you see the position he's talking about. First, he talked about getting two-on-one control on their far arm. From a no-gi perspective, you can grab their far arm with both your hands, without worrying too much about their arm near your head (in gi, it's a lot more dangerous, but he got onto that later).

After having us drill that with some light resistance, Chiu added in the legs. You've created space with your two on one grip, meaning you can bring in your knees (like the 'shin-in-elbow' trick Ed Beneville wrote about it his book, Strategic Guard). If they raise up, that gives you the space to spin back to guard: for drilling this particular technique, your partner needs to be helpful and stay low, stopping you turning in towards them. If you can't get the arm (e.g., they are trying to moving to north south), you can push on the head to stop them going where they want. 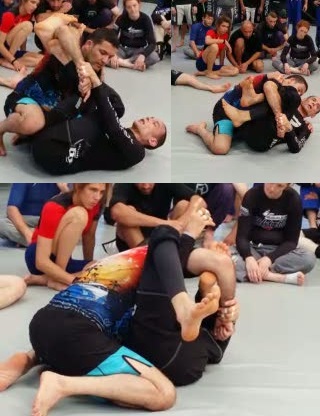 If you can get your knee in, lift that leg to make some space (pushing into their arm with your shin), until you can insert the other leg. If you can get your feet into the crook of their elbow, even better. At that point, it is difficult for them to prevent you making enough room to recover some kind of guard.

In a detail reminiscent of the running escape, you may want to make more space by shrimping your hips into them. You also want to make sure you are monitoring their leg with your inside arm (like your arm is stuck inside their knee), as otherwise they will probably try and get to knee on belly to then rip their arm free. Turning yourself towards them at that point is another good option, spinning into guard once they've given you that space.

A granby roll can work from there too, in the same way as it does from the running escape. However, also like the running escape, sometimes it is tough to get that rolling motion, which can also put pressure on your neck. Digging your feet into the floor and then shrimping towards them is therefore preferable in that situation.

The foetal defence feels like a guard from under side control. It has attacks too, such as switching into a reverse triangle. I was finding it felt natural to push on the back of their arm and spin out. For others, the triangle might feel like a smooth transition. You have the two on one grip, a foot into the crook of their elbow. Kick up with the foot in the elbow, the other leg going behind their arm. Your kicking foot shoots around the side of their neck, locking it with the other leg over your shin. Pull on their elbow and squeeze to finish.

Finally, there is the important question of how to avoid getting choked when trying this in the gi. If you're lazy, they can potentially sneak a hand under your head and secure a bow and arrow grip, or potentially loop their arm over for a breadcutter style choke. To prevent that, keep pressuring their arm by pulling your head back, following that arm if they try to bring it over the top of your head.

If possible, hide your collar under your armpit, which prevents them gripping it for a choke. Do not curl when you're in the gi, that gives them enough room for the choke. In terms of gripping, Chiu recommends grabbing the wrist, lifting the leg to get their elbow up. If you grip the gi and don't lift your leg, they may be able to rotate your arm down to put pressure on your grip.