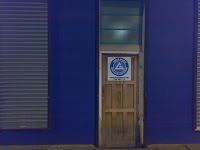 After much dithering, I found myself walking through the hallowed doors of a Gracie Barra gym. Of course, I managed to walk straight past them the first time, not realising that the entrance was a small door, set in a building with formidably barred windows. However, backtracking once I realised I’d got lost (very regular occurrence with me indeed), I soon saw the big ‘Roger Gracie Academy’ sign. Takes roughly 20 minutes by foot from Westbourne Park (on the Hammersmith and City line), though should be faster if unlike me you know where you’re going and aren’t checking a map every few minutes.

I introduced myself to Pippa (I think that was her name), the secretary, who gave me a waiver (first time I can remember signing one of those, although Paragon Kickboxing Gym might have made me sign one too back in 2004). My intro session was to be taken by Oli, a friendly looking blue belt, who directed me to the changing rooms so I could get changed into my embarrassingly new (and therefore starchy and oversized) gi. I ordered it for £20 from the university judo club last year, where I got injured before I had a chance to wear my thrilling new purchase.

Oli started off by quickly asking what previous experience I had – he assumed I had a bit of ground knowledge due to the gi, though I quickly corrected him that my knowledge of teh gr4pple was woefully lacking. In total, I’ve got about 10 hours of judo (most of which were spent with a judo black belt friend of mine rather than a formal class, so don’t really count) and about 26 hours worth of MMA, spread across a four year period from late 2002 until now.

We went through the basic breakfalls – front, back, side, and back roll (I’m not sure what the official names are: the one where you roll over your shoulder forwards, followed by falling backwards and slapping the ground, then raising a leg in front and falling to the side whilst slapping the ground, finishing with a backwards one again but this time with a backwards roll over the shoulder). For some reason, my performance made Oli inquire if I’d ever done aikido.

Come to think of it, I have done one session (which put me off aikido for life), but I mainly learned my breakfalling from a few sessions of ‘Samurai Jiu Jitsu’ (the Warwick branch of the Jitsu Foundation, now renamed simply ‘Jitsu'), a little Kempo Jiu Jitsu (the old Yawaru-Ryu club at Warwick) and the whole 2 formal judo classes I took before getting injured. We finished off that section with shrimping, something again I was slightly familiar with from MMA, also having been shown more recently by a BJJ friend (who posts on Bullshido as Jinksy).

Having gone through the necessary precautions, Oli moved on to a throw. I wasn’t expecting to be doing any throws, which just goes to show my ignorance of BJJ. Oli demonstrated a hip throw, which I assume has some funky Japanese name in judo – it’s the one where you grab an arm, pull them in to your back with your feet fairly close, hold them round the neck then throw them in front of you using your hip. As that left you with a grip on the wrist, I assumed we’d be moving into an arm bar, which Oli duly did, after which he told me to combine the throw with the submission.

Next up Oli went through the basic positions (guard, half-guard, side-control), deciding not to demonstrate full-mount or back-mount, as he assumed correctly I was familiar (at least on a very simple level) with them from the little bit of MMA I’d done. This progressed to a guard pass, something I’ve never been able to manage properly, so was handy to get the beginner demo.

Starting in his guard, I was to grab both the left and right collars in my right hand, twisting it to the left for better grip, keeping my back straight. I was then told, whilst keeping pressure on his right hip with my left hand, to rise up on my right leg, then my left, maintaining a good base. My left hand was then to move up to his knee and push it off my hip, slipping my left arm underneath as I did so.

Keeping as tight as possible and aiming to crush his leg into his body (shifting my shoulder into the back of his knee), the next step was to manoeuvre round with my legs until I was perpendicular to him, still keeping his leg down onto his chest.

Without leaving too much space, I then had to move my head around to the other side of his leg, into side control (putting one hand underneath his head to link up with my other hand, which I think is called scarf hold but I’m not entirely sure). Here's a fairly thorough video by Marcio Feitosa.


That proved to be the last bit of martial instruction for my intro, which all in all took about 20-30 minutes, I think. Oli then invited me to ask him any questions I might have, so we chatted a little about the age, fitness, skill and size range of the students (mixed, with white belts ranging from complete beginners to around 9 months, according to Oli), the instructors (always at least a brown belt teaching, usually black) and the possibility of the Farringdon lesson mentioned to me by Mungkorn Dam over on Bullshido (I was deferred to Nick, one of the brown belts who would be taking those lessons, who was at that time finishing off a private lesson in another room). Turns out that Oli knows PsychoMongoose from Bullshido, and has apparently posted on there somewhere himself, but hasn’t been back for some time.

The physical side of things over, I was directed back to Pippa, to give me the sales pitch. Classes are £90 a month, paid by direct debit, or £18 a session (meaning its not really worth it for just once a week: this was intentional, so that people training there weren’t of the ‘turn up a few times then never show again’ type).

There was also something about a ‘blue belt package’, which included the first month of training (worth £90), a gi (worth £90 again) a year membership worth £50 (which provided insurance, a manual, belts and certificates) for a total value of £254. If I join today, I also apparently get a Roger Gracie T-shirt worth £18 and a Gracie Magazine worth £6. If I join within 1 week, it costs me £150. However, I can’t say I was too tempted: I’ve already got a gi (albeit a crappy one), and I don’t especially need Gracie merchandise. Then again, another gi would be handy, as that would make washing them easier, not to mention if I do the £150 thing, its only £10 more than I’d get for paying a month and the membership anyway (assuming the offer is still valid next week). I think what I’ll do is try out another lesson (which will cost me £18 a pop), after which I’ll decide on paying the £50 membership and £90 per month direct debit.

My problem is that at present I’m only in London on Thursday nights, as I work remotely in Birmingham on Monday, return to London for the Thursday, then take a 19:30 train back up to Birmingham on the Friday. That would mean I could only make 1 lesson a week, which would mean very slow progress and a lot of cash.

The Farringdon club which is starting up soon might be an option (according to Nick, its going to be on 122 Clerkenwell Road, with sessions of both beginners and above starting at 18:15 from Mon-Thu), but that depends on their pay structure. Nick said it may be pay-as-you-go, but nothing has been confirmed yet: the classes wouldn’t be any more convenient for me to get to than those at Roger Gracie, so probably worth my while sticking with the latter.

Therefore, I think my best option is probably to come down from Birmingham earlier on the Wednesday, in time for the 18:30 class. The only problem with that is I don’t want to upset my girlfriend, as that means she won’t get to see me Wednesday night. She didn’t sound too thrilled on the phone just now, but I’m hoping I can convince her over the weekend. Coming up earlier on the Friday night instead of staying late on Wednesday might work, but we’ll see.

So, hopefully I’ll be training regularly on Wednesdays and Thursdays at Roger Gracie’s from now on, but can’t be certain yet. After all, £1140 is a lot of money, even if it is spread out across a year. I’m pretty sure the quality is worth it, but depends how things turn out.

[Note: Obviously I did decide to join RGA: the next time I attended is here, although I was ill, so just watched. First proper class was in November, here. In case you're wondering, the photo of the academy is from 17th Jan 2008, after they'd painted the walls. ]
slideyfoot at 22:09
Share