Short Review: This is a relatively compact and well illustrated introduction to BJJ, with details on all the basic techniques a beginner will need in the early stages of their training. Walder packs in plenty of large, clear photographs, coupled with sensible advice on how to approach training and execute specific techniques. Available to buy here (or in the US, here).

Full Review: Last Christmas, one of the numerous BJJ books I received was by an instructor based here in the UK. Walder is a pioneer in British BJJ, and among the first Brits to venture abroad to learn from the Gracies (I think Rick Young was the very first, in 1989). His offering appeared a few years after Ricardo Da Silva's book (BJJ: A Training Manual, which I reviewed earlier), its format closer to the typically bigger dimensions of most BJJ manuals, meaning that unlike Silva's book, you would struggle to fit this in your pocket.

Having said that, it is still smaller than the average BJJ book, because Walder is economical with photographs. There are plenty of them, attractively laid out and large, with details highlighted on certain techniques (e.g., trapping their lower leg with your foot for the bridge and roll). In contrast to every other instructional book I’ve read up to this point, the pictures are not set into squares: instead, each photo is carefully fitted within a sequence, so that heads, knees and arms are slotted under backs, as well as around the text. That is possible because they’ve all been cropped, so only the demonstrating figures remain, rather than the usual superfluous background of a gym and mats.

A minor flaw was that Walder and his uke didn’t stick to the same gi for the whole book: most of it is spent with Walder in a dark brown gi, but towards the end he switches to white, while his partner has a couple of different colours (presumably because the photographs were shot over a long period). I much prefer Beneville’s consistent, neat approach, which is one person in white and the other in blue for the entire book. Helpfully, that also means Beneville can refer to people simply as ‘white’ and ‘blue’.

In his opening section, Walder makes the important point that “simply reading this book is not enough, as knowing and doing are totally different concepts.” As he goes on to say, “to become proficient in BJJ and have a true understanding of how each technique works, it is necessary to couple your mental knowledge with physical action.” I also liked his emphasis on staying relaxed and focusing on technique, which is something I very much strive to do in training.

Walder also finds time to sketch out the history, though less successfully than Da Silva and Semple, and not up to the benchmark standard (judo quibbles aside) of John Danaher’s work in Mastering Jujitsu. The dubious myth about jiu jitsu originating 'with the monks in India' is repeated, granting jiu jitsu an unlikely five thousand year lineage. Still, this is a widespread version of BJJ's past, which you'll see on any number of club websites, so it does have plenty of precedent. The old story about Helio being so sickly and frail that he had to learn BJJ in a purely visual fashion also pops up, but that’s understandable given Walder’s time at the Gracie Academy in Torrance.

I preferred Walder's glossary, a great idea I haven't seen in any other BJJ book (though of course I don't own them all, so it may well be more common than I imagine). BJJ terminology is rather fluid, and it also has to cope with an extremely intricate set of techniques: hence why I made sure to include my own glossary back when I first began writing a BJJ blog. Walder has a few strange ones, like the description of ‘cage fighting’ as a ‘UFC event’, but it’s a step in the right direction.

Walder titles his work Essential BJJ, which indicates that it is going to be a review of the fundamentals. He does a good job on that score, presenting an overview of how to approach training, safety, belt ranks and the basic positions of BJJ in his first chapter, before gradually progressing to the essential building blocks of BJJ. Judging by what Meg writes on her blog (she’s a purple belt under Walder), self defence is important in Walder’s organisation, so it is unsurprising that he includes the headlock in his summary of BJJ positions.

The next chapter, 'Basic Movements', is excellent for beginners. After covering standing up in base, Walder runs through bridging and shrimping, first solo, then with a partner, before demonstrating how those two motions work in combination, with the example of the elbow escape from mount. Both the photography and the accompanying text is clear and concise.

The one part I didn’t like is when Walder's roots under Rorion make themselves felt, when he gets to guard passing. Walder decides to include the Gracie Gift pass without warning about the danger of the triangle, just like Rorion's discredited explanation on Gracie Jiu Jitsu Basics. As Roy Dean showed in No Gi Essentials, it isn't difficult to correct that error by hiding the elbow, but this key detail is missing from Walder's description. Extending the arm like that makes you vulnerable to a triangle, especially if you're a beginner.

Having said that, Walder does note “the basic pass you learn in this book will not be the final one you end up using, but you have to have a starting point.” That indicates the thinking is to introduce the technique, then bring in fine details later in class. It is also followed by a much safer standing pass, tucking the elbow inside your knee.

Walder moves on to a chapter entitled ‘Maintaining the Top Position’, which continues the progression from passing the guard into side control. Walder begins with the kimura and americana (which he refers to as a keylock) from side control, before progressing to an armlock. Having covered three submissions, it is time to move to mount. Usefully, the accompanying pictures are from an overhead perspective, which makes the transition much easier to see: Walder also makes sure to show both the step over and knee slide methods.

You might think it would finish there, but living up to the chapter title, Walder provides comprehensive coverage of potential ‘what if’ scenarios, running through five common situations that can occur when in mount. Although the mount is arguably the most dominant position in BJJ, it can be tough to stay there, especially as a beginner. The instruction here will definitely help those new to the sport develop their top game.

For some reason, the previous pattern of relatively short, focused sections is disrupted by the next chapter, ‘Attack and Defence’. Instead, Walder groups a whole range of positions into a single chapter, with attacks and defences from guard, side control and mount, before finishing up with some takedowns. It does have subheadings, but I would have preferred it if the careful organisation seen earlier in the book had continued.

Still, the content remains good, with three attacks from the mount, followed by two defences from under side control. This slots together with the transitions to mount Walder demonstrated earlier, as they act as counters to first the step over, then the knee slide. The first of those is among my favourite side control escapes, which I was originally taught by Tran back at RGA HQ: Walder does it a little differently, having his arm already high up into the armpit, ready to roll to the top. 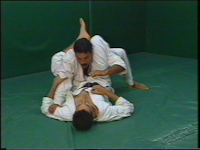 From there Walder progresses through guard, describing the classic attack sequence of kimura, guillotine and sit-up sweep. He follows up with another standard series, this time from the collar and elbow grip, detailing the armbar, cross choke, triangle (interestingly, and again like Rorion, this is shown as a counter to the Gracie Gift pass demonstrated earlier) and finally scissor and push sweeps. The chapter then switches to headlock escapes, before finishing with two basic takedowns, the hip throw and the double leg.

In Walder’s concluding segment, he notes the importance of repetition, and also developing leverage. As in the introduction, he emphasises that above all, it should be fun: that’s easy to forget, but it’s essential that you do actually enjoy what you’re doing, rather than it being something to suffer through. There’s also a brief little segment on Walder’s own history in the sport: those personal biographies in BJJ books are always interesting to read (and sometimes downright hilarious, like the bizarre offering included in Bravo’s Mastering the Rubber Guard).

Though there are a couple of minor details I disliked, Essential BJJ would be a good choice for any beginners looking for a solid instructional book on basic BJJ. Walder examines all the core techniques you could want at the early stages of your training, and also lays out some useful theoretical principles, like the fundamental importance of staying relaxed and focusing on technique above strength. Available to buy here (or in the US, here).
slideyfoot at 15:03
Share