Before the second day of the ADCC last year, Caleb from the FightWorks Podcast organised one of his regular 'meet the family' breakfasts. Not many people showed up to chat with him and Shawn Williams, but among that group was John McGuigan, a student at Gracie Barra Glasgow. As I'm one of the writers for Jiu Jitsu Style magazine, John asked me about getting a 'JJS on the Road' visit to GB Glasgow, kindly extending an invitation to stay with him in order to do so. I gladly accepted, as I thought it would be a great opportunity to not only visit some Scottish BJJ clubs, but also explore some of the beautiful Scottish landscape.

I'm a big fan of Bristol's rugged neighbour, Wales, particularly the craggy coastline at Aberystwyth. I was therefore looking forward to something comparable up in Scotland, which is also known for its dramatic scenery. Taking in the many castles would have been interesting too, but most of them are closed in March, so that will have to wait for another time (though there were a couple open, one of which we went to see on our last day). 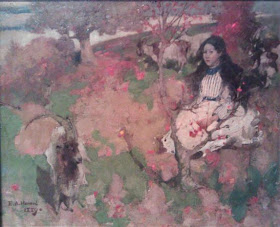 It's not all about landscape, of course. Glasgow in particular also boasts some excellent art, most famously the Glasgow School. I had seen a documentary about a part of that group, the Glasgow Boys (there is a female counterpart known as the Glasgow Girls), which meant the Kelvingrove Art Gallery and Museum immediately jumped to the top of my list in terms of must-see sights in Glasgow. I headed straight there from Glasgow Central after getting off the train from Dumfries: it's roughly half an hour walk up St Vincent Street.

Wandering through the Kelvingrove can feel disjointed at times, as a number of rooms are arranged around vague themes like "looking at art", meaning a seventeenth century Dutch piece will be right next to something from 1990. The accompanying captions enhance the sense that it's directed at children, such as "do you think the unusual shape of the picture helps communicate how he felt about the event?" I would have much preferred something more informative about the history of the painting, but fortunately for snobs like me, orthodox organisation was in evidence as well, like the main attraction, the Glasgow Boys exhibit.

In their defence, some of those attempts at encouraging people to engage with art worked quite well, like the interactive console in front of Rembrandt's 'Man in Armour'. The subject of the painting has long been a matter of debate, so the Kelvingrove has provided a little talking head to guide you through five possible candidates, with accompanying evidence and theories.

The Glasgow Boys room features a good overview of their entire career, including two of the most famous paintings, 'The Druids' and 'A Funeral Service in the Highlands'. A short thirty minute documentary about the Boys' work runs on a loop, including details on art restoration at the end. That's something that pops up again for another highlight of the museum, Dali's 'Christ'. It's heavier on the restoration angle this time, as that painting once had a brick thrown at it, resulting in some large tears. 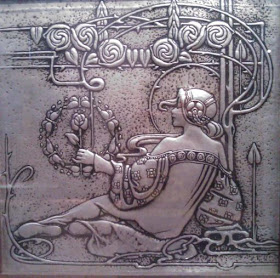 Although I was mainly there for the art associated with the Glasgow School, it is a museum as well, so you can look at exhibits on wildlife, archaeology and polar exploration, among others. After gazing at all the painting, I had time to explore the educational discussion of representations of Scottish identity in art, Glasgow life and a cool weaponry display (this time, the Kelvingrove's habit of throwing in lots of disparate material worked well, with African and Asian swords compared to Scottish and European examples).

That evening, John took me back to Helen's incredible house to stay the night and benefit from their amazing hospitality. I'd been looking forward to talking to Helen about Strawberry Switchblade (in case she's reading this, the Strawberry Switchblade site I was talking about is here, though as it comes up first in the Google results anyway, not exactly hard to find ;D) and Scottish pop, so that was really cool too. On the Wednesday, I headed down with John to the afternoon class at Gracie Barra Glasgow.

It's a relatively new gym, but already has a huge number of students, with a massive mat space to match. After John gave me a quick tour, I interviewed the head instructor, Ricky Gillon. Before his purple belt in BJJ, Gillon was already an experienced fitness and MMA coach: the story of his journey from karate, body-building, MMA then BJJ should be appearing in the next issue of Jiu Jitsu Style. He certainly isn't shy about talking, so I've got a ton of material to use for the 'JJS on the Road' column! :)

The fundamentals class tonight featured lots of combination drills, rather than pausing on specific techniques. It is the kind of system I'd love to use for a warm-up, which you could build up over a period of several months until all the students were familiar with the routine. I have considered doing something like that at Bristol, but I tend to get different people showing up to each class: I'd need a core group of regulars for a combination drill warm-up to work well.

Ricky's first combination was to pull guard, then as they try to stand, switch to the double ankle grab sweep and knock them to the floor. As you come up, make sure you maintain control of their same side foot, reaching for their collar with your other hand. Move through to mount, then spin to take the arm and complete the submission. Later, there was a variation, where this time when you go for that armbar, they are able to tuck their elbow and turn to your guard. As they look to pass by reaching under your leg, switch to a triangle, before restarting the drill.

Another drill started from standing where they have a collar and elbow grip, circle your arm to break a grip, then step in to clinch from the side. Step through to set up a hip throw, take them down then move to knee on belly. Grab their collar and slide into mount. They then trap your collar grabbing arm and a leg, bridging and rolling to come up in your guard. Again, they try to pass by bringing an arm under your leg, setting you up to finish with a triangle. The last drill was the same, but this time you use a spider guard set-up for the triangle.

Like yesterday, I stayed very defensive in sparring, with my usual running escape survival posture. There was only one exception I can remember, where I immediately drove through to top half guard with one of the white belts. I managed to flatten them out and began looking for the usual pass, but messed up and got swept. I also had a play with a spider guard sweep from Abmar Barbosa but couldn't quite get the angle, before practicing butterfly (getting passed pretty quickly as usual, but hey, good to keep on trying it).

Last roll was with Ricky, who as you'd expect dominated me quite easily. He was going light, as he's a fair bit bigger and stronger, so again it was another opportunity to work on my defence. He would have choked me from the back if time hadn't run out, as he was in the process of sinking his arms around my neck. That's definitely the major risk with the running escape if you're too complacent about their arm sneaking past your hip.

Very handily, Gracie Barra Glasgow is right around the corner from Glasgow Central Station (about a two minute walk, if that), so I was able to get back on the train to Dumfries for a decent hour. The next day, my gf and I went to Glentrool, or at least we tried to: annoyingly, the trail around the Loch was closed until April, but there's still a gorgeous view from Bruce's Stone up on one of the hills.

If you're looking for a decent meal in Kirkcudbright, then I'd highly recommend the place we tried that evening, Kirkpatrick's Restaurant. That was itself recommended to me by Mr Mulligan, whose flat we rented (which was awesome too, especially as we got a discount due to it being out of season: you can book it here). He suggested we go on Thursday for the 'Scottish tapas'. As a result, I finally got to try some haggis: wrapped in bacon swimming in red jus, it was delicious. The Irn Bru sausages were great too, and so was the tasty brownie and ice cream dessert.

Thanks again to John and Helen for their hospitality, and of course for inspiring my trip to Scotland in the first place! :D
slideyfoot at 14:06
Share