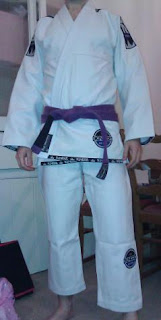 Short Review: If you want an ultra lightweight gi, but don't feel comfortable with the extremely thin ripstops like Gorilla and Kauai, then the Kingz Ripstop serves as a happy medium. It is still ripstop, and therefore lightweight and quick-drying, but at 420gsm it is also much thicker than either the Gorilla or Kauai. In addition, the trousers are not ripstop, but sturdy standard cotton, with the same unusual flexible crotch panel as other models in the current Kingz product line. Available to buy here.

Full Review: I enjoy training while I'm travelling, which is why I picked up a Gorilla 'Hitman' ripstop a little while ago. I was very pleased with that gi when it arrived, as it fulfilled all my requirements: plain, super-light, quick-drying and fairly cheap. I was therefore intrigued by the prospect of comparing it with another ripstop offering, from Canadian company Kingz Kimonos. 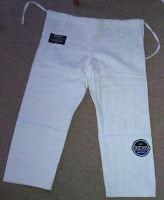 When other gi companies use ripstop in their products, they will often opt to go with ripstop trousers and a lightweight gi top. A few companies, like Gorilla, also offer a completely ripstop gi. Kingz has taken a different route, as their ripstop gi has a ripstop jacket, but standard cotton twill trousers. These appear to be the same trousers which are included with the heavier 550 Comp model, with that same flexible crotch panel. They're superb trousers, as I mentioned in my review of the 550 Comp, but they're certainly not ultra-light.

This meant that for my purposes, the Kingz Ripstop is slightly less convenient, as I was hoping to use it when training further afield. Another option, which I tested out during my recent trip to Scotland, was to switch the Kingz trousers for a ripstop alternative: in my case, I went with the ripstop trousers from my Black Eagle Predator (reviewed here). However, at 420gsm, the Kingz Ripstop jacket is beefier than typical ripstop, meaning it does not pack as tightly as I would have liked. The Gorilla ripstop jacket is almost half the thickness at only 250gsm.

Of course, not everybody is looking for a gi to take travelling. If you simply want a light gi for training at your home club, then this remains a good choice, particularly if you're nervous about the thinner varieties of ripstop gi currently available. It's possible that the combination of ripstop stitching with a heavier material is particularly durable, but I can only speculate as I haven't had the gi very long. It's also possible that this thicker ripstop is more common than I'm assuming, given that I've so far only worn two ripstop gi jackets (Kingz and Gorilla) and rolled with training partners who were wearing two other brands of ripstop jacket (Kauai and Koral). 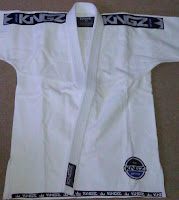 In terms of patches and embroidery, the design across the four models (Women's, 550 Comp, 420 Light and Ripstop) in the Kingz line is currently very similar. The only difference is the secondary colour, which on the Kingz Ripstop is blue, along with the model name included on the patches. As with the 550 Comp, they're understated, so will appeal to those who like a minimalist gi. For those who like me are more obsessive and want something even plainer, again as with the 550 Comp, the patches are not difficult to remove (and because the Kingz ripstop jacket is thicker than average ripstop, the needle holes won't show, unlike the patches I removed from the Predator trousers), with two exceptions.

Firstly, the shoulder patches are stitched underneath the collar, so you won't be able to get rid of that last edge. You'll be left with a dark line of black fluff under the collar, though it isn't especially noticeable unless you're right up close. Secondly, the tape around the bottom of the jacket cannot be removed at all, as it is holding together a fold of unhemmed material. I guess you could unstitch it and then replace it with a plain white tape, but that's beyond my sewing comfort zone. ;) 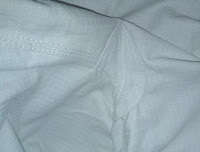 Given that similarity of design, almost everything I said in my 550 Comp review applies to the Ripstop as well. There is the same reassuring level of reinforcement on all the major stress points and a generous six belt loops to keep your trousers up. The collar is rubber, which Kingz states will not warp under typical levels of heat in a washing machine. In my garden on a sunny day (although this is in the UK in March, so it still wasn't especially warm), the gi took about seven hours to go from soaking wet to completely dry.

Yet another similarity between the 550 Comp and the Ripstop is that there isn't much shrinkage, at least at the 30 degree Celsius temperature I use to wash my gis. My A1 stayed at 156cm cuff to cuff on the jacket, while the trousers retained their 92cm length. For my frame (5'7 and about 65kg) that was comfortable, though I would be happy enough with a couple more centimetres off the sleeves. As long as you don't throw this in the tumble drier on a high heat, then as it's pre-shrunk, the figures on the size chart should be an accurate reference. 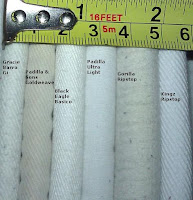 Several gis use ripstop for reinforcement to help lighten the weight, such as the ripstop cover for the Padilla Ultra-Light collar. The Gorilla Ripstop also uses ripstop over the collar, but the Kingz Ripstop opts for tougher cotton twill, in keeping with the more orthodox gi jacket. This is a little heavier, but should presumably mean the Kingz collar is less prone to fraying. 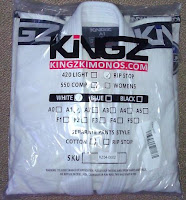 The Kingz Ripstop is a quality product relatively free of bling. So, I'd still recommend this if you want a light gi for training, but there are better options if you're looking to take it with you travelling. Available to buy here.
slideyfoot at 20:02
Share